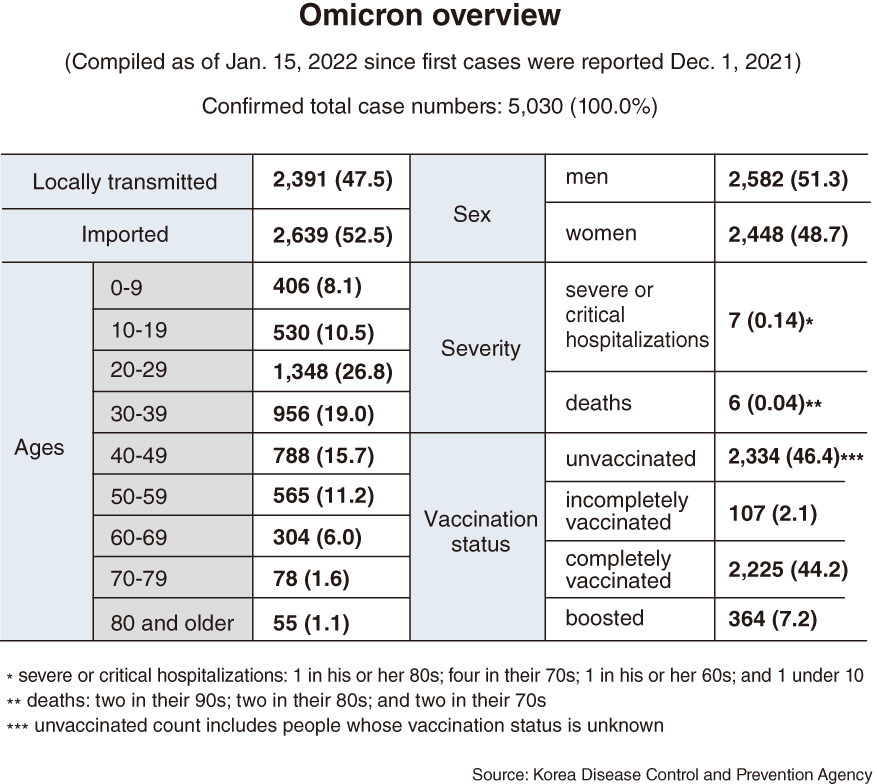 Omicron will dominate in South Korea in a matter of mere days, top health officials say.

Minister of Health and Welfare Kwon Deok-cheol said during a government meeting Tuesday that based on internal models omicron was “predicted to assume a dominant role by this weekend.” The upcoming Seollal holiday is feared to expedite its spread, he said.

According to the Korea Disease Control and Prevention Agency’s data, omicron appeared in 26.7 percent of all analyzed samples in the second week of January. That rate was just 1.7 percent three weeks ago on Dec. 18.

Son Young-rae, a spokesperson for the Health Ministry, told a public radio broadcaster on Tuesday that the omicron share in the country will rise to more than 90 percent of new cases in about three weeks’ time and overtake delta as the predominant variant. “By then, a surge will be inevitable,” she added.

The national disease control agency’s Jan. 14 analysis showed cases logged each day could increase to up to 30,000 by late February and ICU hospitalizations up to 1,700 -- if restrictions of similar intensity as ones in place now are maintained.

Since mid-December, risky businesses have once again faced 9 to 10 p.m. curfews and people could socialize in groups no larger than four to six. These restrictions were restored in the aftermath of severe bed shortages brought on by the Nov. 1 reopening.

Ahead of the imminent takeover, key metrics are “markedly stable,” Son said.

ICU admissions have fallen to below 50 percent last week from more than 80 percent in mid-December, he said. Average deaths per day have halved to around 290 over the same period. Nearly half as many cases were occurring, with six found for every 100,000 people from 13.

An overview of known omicron cases here so far (The Korea Herald)
“As omicron goes on to become dominant, the restrictions that we have now may need to be eased further,” Son said.

The ministry has said that once omicron starts dominating the outbreak, Korea will abandon its rigorous virus control strategy known as 3T -- test, trace and treat -- and focus on providing “targeted protection” for vulnerable people.

Dr. Jung Jae-hun, a COVID-19 advisor to the prime minister, said in a phone interview the previous ways of dealing with the pandemic “will no longer be sustainable.”

“We can’t approach omicron like we did the other variants. It’s a very different virus -- incredibly transmissible and less severe,” he said.

Korea’s disease control authorities estimate that omicron’s ability to hospitalize patients is about 25 percent of the rate for delta. Among the more than 5,000 omicron cases that have been confirmed so far, seven patients were hospitalized with severe or critical disease, and six have died.

Asked how well prepared Korea was against the omicron wave, he said some challenges were presaged with managing “huge numbers of self-isolating patients and their quarantined contacts.”

“Assuming that three people go into quarantine for every newly diagnosed patient, and we start seeing around 50,000 patients daily, that means nearly 200,000 people could be put under quarantine each day,” he said. “That could seriously disrupt essential services outside health care.”

Omicron’s climb to dominance appears to be slower in Korea, and this was likely due to the restrictions that were reimposed last month, he said.

“Compared to other countries, omicron has been almost twice as slow to establish its dominance in Korea. Delta was a bit slower here too. I think that means the steps we are taking to suppress the surge are more effective.”

More than six weeks have passed since the first cases were identified locally on Dec. 1, while in other countries it has taken about four weeks, he said.

Jung added that omicron will “infect almost all” of the country’s unvaccinated populations. “Now you either get vaccinated, or get COVID-19,” he said.

Once omicron takes hold, its impact will be “just as explosive” as it has been elsewhere, said Dr. Paik Soon-young, an emeritus professor of microbiology at Catholic University of Korea.

Paik said the proportion of omicron cases here were “doubling every week.” “Last week omicron showed up in 26 percent of cases. The week before that it was around 12 percent.”

“Korea may have been able to buy some time but not by a lot -- perhaps a couple of weeks.” But once dominant, omicron will “rise at an exponential rate with a reach that‘s hard to predict,” he said.