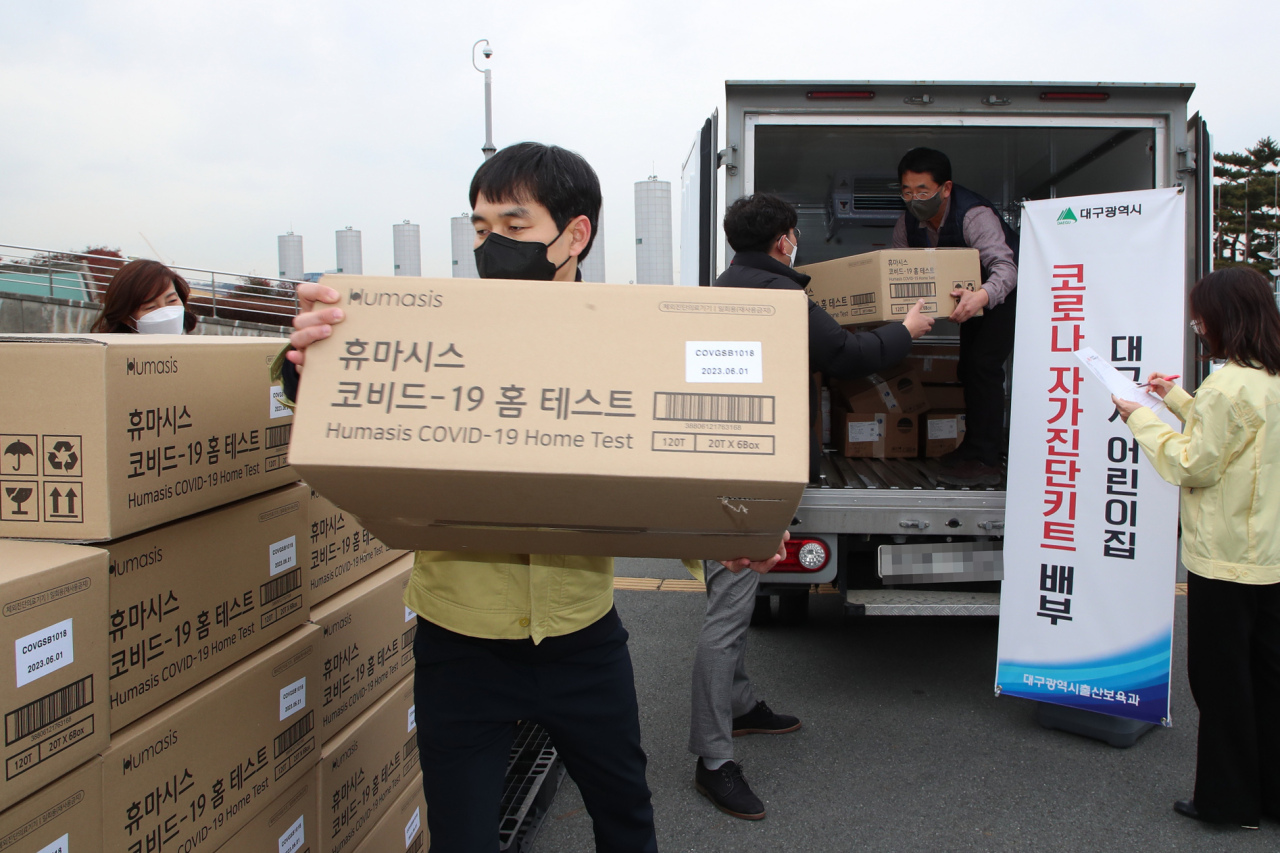 The Ministry of Health and Welfare said the country’s COVID-19 diagnosis system, which so far has only used the highly accurate PCR tests, may start using the rapid antigen tests for less urgent cases.

At the moment omicron accounts for 8 percent of all sequenced cases in Korea. But given its extraordinary transmissibility, omicron is likely to become dominant “in a matter of weeks,” the ministry said. According to the Korea Disease Control and Prevention Agency estimates, omicron is two to three times more transmissible than its predecessor, delta, though probably less likely to cause severe disease.

High testing priority groups include older adults, patients with medical conditions and anyone who isn’t fully vaccinated, the ministry said.

Workers at nursing homes and other vulnerable settings, who are required to get tested at least once a week, may now be able to get rapid tests instead of PCR tests.

Health Ministry spokesperson Son Young-rae said to reporters on Monday that although the rapid antigen tests are not as accurate, they could “complement testing” if resources fall short. According to the ministry, sensitivity -- or the ability to correctly identify an infection -- of rapid antigen test kits used in the country was 17 to 40 percent.

“Once omicron is dominant, and cases start soaring like they have in other countries where omicron is already dominant, our PCR testing capacity may be stretched beyond its limit,” he said.

“When that point comes, PCR tests will be given in the order of priority. People at higher risk of severe COVID-19 will be tested first, for example. People who aren’t experiencing symptoms can get a rapid antigen test.”

Asked how large a caseload would push the testing system to rely on rapid antigen tests, Son did not give an immediate response.

Dr. Hong Kiho, a laboratory medicine professor at Severance Hospital, warned rapid antigen tests -- already less sensitive -- are likely to miss early stages of omicron infections due to the variant’s many mutations. In fact, up to 60 to 80 percent of omicron cases could be missed when screened by the rapid tests, he said.

In a phone interview, he said letting symptom-free people take rapid antigen tests, whose sensitivity depends on a high viral load, would “risk missing a whole lot of cases.”

“Some patients stay without symptoms throughout the course of the disease. But some patients end up developing symptoms later on. In these presymptomatic stages the viral load is not sufficiently high to be picked up by the rapid tests,” he said.

“Because these patients, though negative in rapid tests, can still be infectious, infections can spread undetected.”

Hong said that Korea was not testing as robustly as it could be.

Despite high demand, testing clinics were closing down. In fact, seven public hospitals in Seoul ended their free testing services over the past week after running since June 2020.

Hong said it would be “irresponsible to resort to less reliable tests without beefing up measures to reduce the spread.”

“While testing and tracing are being compromised, no plans are being laid out for adopting stricter social distancing,” he pointed out.

From a record-high streak of 7,000-plus daily cases in mid-December, Korea has seen a downward trend in overall cases and hospital admissions since early January due to a return to social distancing measures and a rise in booster vaccinations. In the past week, an average of 3,599 cases were found each day.

This is still high compared to before the “living with COVID-19” scheme began on Nov. 1, when less than 2,000 cases were being recorded daily.

If omicron threatens to topple the country’s testing system, “then surely, we should be reintroducing tougher curbs to stem the case rise,” Hong said.

He said the government had not consulted the laboratory medicine society on these forthcoming changes in the testing regimen.

“The gold standard in COVID-19 diagnosis remains the RT-PCR using nasopharyngeal samples. RATs (rapid antigen tests) are not at all an apt replacement. I mean this is a step in the very wrong direction.”

Dr. Paik Soon-young, an emeritus professor of microbiology at Catholic University of Korea’s College of Medicine, said testing clinics were still experiencing long lines, especially in the Seoul area, with some people having to come back the next day to take a test.

“Our testing sites are already so busy. When omicron starts driving up the demand for testing, clinics are going to be even more swamped,” he said. “Widening the use of rapid tests is probably in anticipation of that possibility.”