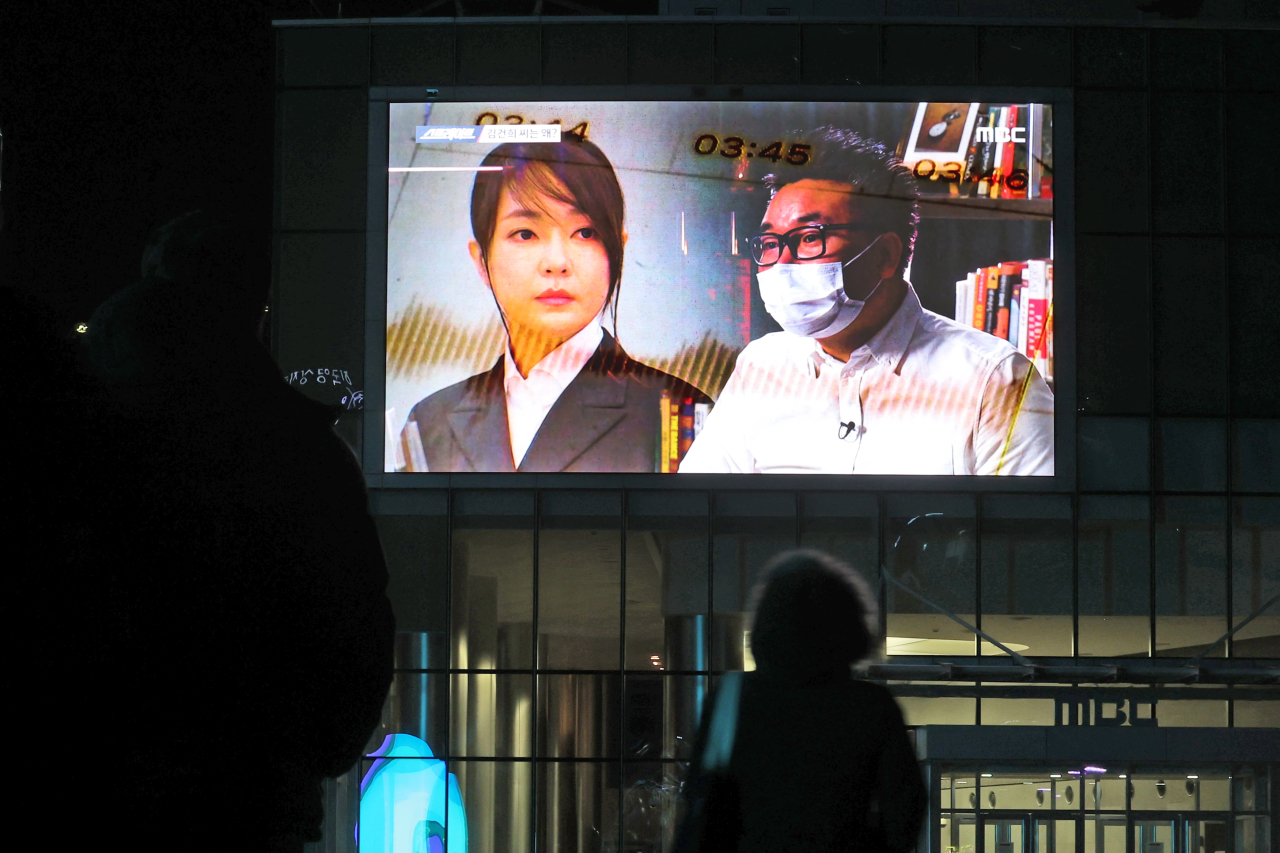 A day before, MBC had broadcast parts of the 52 recorded phone calls made between Lee Myung-soo, a reporter for YouTube channel Voice of Seoul, and Kim.

In the revelation, Kim was shown to have made some remarks deemed inappropriate, such as hinting at her involvement in the electioneering team and in prosecutorial investigations conducted by her husband.

“At the time of the broadcast, I was doing something else so I did not watch it. But I still express my apology for raising the concerns of many,” Yoon said while attending a campaign event Monday.

“It was inappropriate to broadcast the private conversation. But I do agree that it is not fully understandable how (my wife) had such long private conversations (with the reporter),” Yoon added. The 52 phone calls amounting to 7 hours of conversation were made over a six-month period from July last year.

Yoon denied that his wife had any influence on his campaign team, saying she would not have had the time for such long phone calls if she was involved in their activities.

Following the revelation, the main opposition party expressed “relief” on Monday, as the news of the impending broadcast had stirred controversy with Kim’s remarks feared to strike a blow to the presidential candidate.

In recordings revealed by MBC on Sunday, Kim makes several remarks that could be seen as implicating her in the recruitment of Yoon’s electioneering team as well as its campaign strategy.

“Do you think Lee Jae-myung would take good care of you if he is elected? Never. We will give you as much as you deserve. If you do well, we could give you 100 million won ($84,000),” Kim said, suggesting a favor for the reporter in return for help in the campaign. Lee Jae-myung is the candidate for the ruling Democratic Party of Korea.

Kim was also seen as undermining the country’s #MeToo movement, and expressing support for a liberal former governor who is currently serving a prison term of three years and six months for sexual assault.

Sunday’s broadcast also showed her written response to the broadcaster’s request for comment, which included an apology.

“I did not interfere in the campaign team’s work,” Kim said in the statement. “I am deeply sorry for making inappropriate remarks when I was criticizing the liberal politicians from the ruling bloc who committed sexual exploitation.”

When MBC had first announced it would make a report on Kim’s conversations with the reporter, the People Power Party visited the broadcaster in protest and filed an injunction. The court had partly accepted the People Power Party’s request, but allowed portions of the recordings to be aired.

On Monday, the People Power Party ramped up criticism against the reporter from Voice of Seoul for violating media ethics as well as MBC for broadcasting the recordings it deemed “purely personal.”

“To be honest, we were anxious that the broadcast would reveal something very shocking that we are not aware of. It is relieving to think that we just made a fuss of this,” said Won Hee-ryong, Yoon’s campaign policy chief.

Rep. Kwon Young-se, the presidential candidate’s campaign chief, accused the Voice of Seoul reporter of deliberately planning for six months to obtain the illegal recordings of phone calls with Kim.

“The act (of the recording) goes over the line of media ethics. I would call it a vicious political act,” Rep. Kwon said during a party meeting Monday.

The campaign team’s communications chief also labeled MBC’s broadcast as “violence” for revealing a private conversation, which the network said was in the public interest.

“Kim’s words appear to be exaggerated or rough because she would have thought of the conversation as private,” Rep. Kim Eun-hye, the communications chief, said in a radio interview Monday.

On the other hand, YouTube channel Voice of Seoul expressed regret for providing the recordings to MBC, saying the broadcaster did not fully report on critical parts that show Kim’s involvement in Cho Kuk’s case.

“Kim Kun-hee said they were not going to detain Cho Kuk or Chung Kyung-sim (Cho’s wife) if they stayed doing nothing. ... I don’t know why MBC did not include that part,” Baek Eun-jong, head of Voice of Seoul, said in a radio interview Monday.

Yoon, who was the prosecutor general at the time, launched a corruption investigation into Cho, who was then the justice minister.

Baek added, “The dialogue obviously gives off the impression that Kim meddled with prosecutorial authority.”

Lee Jae-myung, the ruling party’s presidential candidate, said he did watch MBC’s report on Kim Kun-hee’s recordings, but appeared cautious to comment on the content.

“I did watch because I am interested, but it was just watching. I just want to focus on how to care for the livelihoods of the people and the economy.”

Lee, however, criticized a report that Yoon’s campaign team had hired a shaman as an adviser.

“In this 21st-century modern society, and in a country where nuclear missiles exist, there should never be such a case where a shaman interferes in or affects decisions (on state affairs),” Lee said Monday.

“Handling state affairs of a country with a population of 52 million should be based on sincere deliberations, acute analysis from experts and the strong principles of the leader,” Lee said.

The People Power Party has refuted the report on recruiting a shaman, saying the person mentioned in the report is neither a shaman nor has been hired to work at the campaign team.