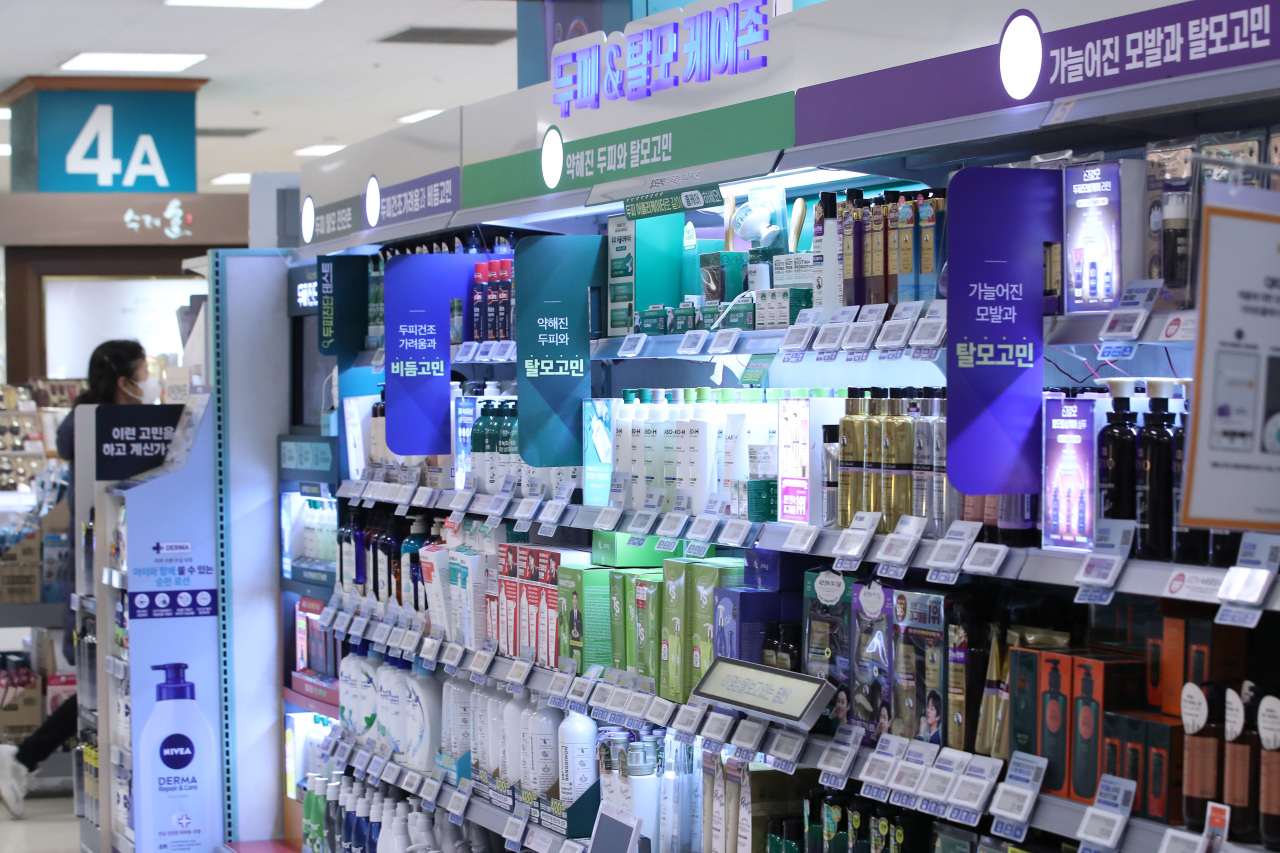 Anti-hair loss products are on display at a store in Seoul on Friday. (Yonhap)
Last week, the talk of the town was Democratic Party of Korea presidential candidate Lee Jae-myung’s pledge to have hair loss treatments covered by public health care insurance, prompting both cheers from supporters and criticism of populism.

What stood out in particular was the enthusiastic response from young voters, despite hair loss known to be more prevalent among the older generation. In fact, the pledge itself was suggested by the Lee election team’s youth committee, off a plea by a Lee supporter in his 30s.

While its feasibility is questioned, the buzz around it indicates that the pledge hit close to home for many young Koreans.

Traditionally, being a young Korean meant you had less reason to worry about going bald. According to a study by University of Bonn professor Stefanie Heilmann-Heimbach, balding for men of European origin usually starts in their 30s, with up to 80 percent being affected to some extent.

Hair loss for Asian men generally occurs a decade later, and affects 50 to 60 percent of the male population.

But data shows that an increasing number of Koreans are being treated for hair loss, with a notable increase in younger age groups.

In 2020, a total of 233,194 people were treated for hair loss at hospitals, with women accounting for 43 percent, according to the National Health Insurance Service. But the age group who received treatments the most were those in their 30s at 22.2 percent. The figure was particularly high among men in their 30s, with 25.5 percent receiving treatment. Even 20-somethings, who are less likely to experience hair loss, were almost as likely to receive hair loss treatment as 40-somethings, with figures of 22.2 percent and 22.3 percent, respectively.

NHIS Ilsan Hospital dermatologist Cho Nam-jun said it is not likely that there was an actual spike in hair loss among young men.

“It is more likely that more young people are seeking clinical help because they are increasingly more concerned about their looks, rather than a drastic increase in hair loss,” he was quoted as saying.

Those in the industry speculate that the hair loss problem may be larger than the official numbers suggest. The public health care system covers only a limited range of disease-related hair loss, and that does not cover the home remedies many youngsters often opt for.

A woman surnamed Park started using shampoos advertised as having anti-hair loss functions when she had her first child in her mid-30s.

“I started losing a whole bunch of hair right after giving birth, which freaked me out. So I thought I should take good care (of my hair) while I’m still young,” said Park, now 40.

It is still unclear exactly how effective the supposed anti-hair loss shampoos are, but they are widely considered by the public as a viable option. TS Trillion, a company specializing in hair-loss products, saw its stocks jump from 791 won to 1,025 won ($0.66 - $0.86) on Wednesday. Their stocks have been hovering around the 1,300-won range since Thursday.

With youth hair loss becoming more of a widespread issue, even young celebrities are choosing to “talming out,” a slang that combines hair loss (talmo in Korean) with the term coming out. Go Eun-ah, a 33-year-old actress, recently revealed on her YouTube channel that she received a hair transplant, as did 37-year-old comic writer and TV personality Kian84.

In 2016, then-23-year-old Peniel of the boyband BtoB grabbed attention by revealing that he was suffering from stress-induced hair loss.

Another comic writer Joo Ho-min openly talks and jokes about how he went bald in his 30s, even earning the somewhat affectionate nickname “Paju monk.”

The new trend marks a departure from the past when talking about hair loss was borderline taboo. Sul Woon-do, one of the most popular singers in the 1980s, kept his baldness an airtight secret to such an extent that he once said --possibly jokingly -- that even his wife was not aware that he wore a wig until a few years into their marriage. To this day, not one photo of Sul without his wig on has been made public.

But while more celebrities are openly talking about their hair problems, many of the general public say they are ridiculed, even penalized for the same problem.

The youth committee of the Democratic Party of Korea election campaign team last Wednesday held an open discussion about Lee’s pledge, during which seven citizens in their 20s and 30s were invited to talk about the problems entailing their premature hair loss.

A 30-something man surnamed Kim said he has been losing his hair since he was in middle school. Kim claimed he spent about 20 million won ($16,700) to address this problem, but eventually gave up because of the financial burden on his parents.

“Even when I was looking for job, I found myself thinking, ‘Did I not get it because I’m bald?’” he said. The current the health care system does not cover naturally occurring hair loss.

Democratic Party of Korea’s Rep. Kim Won-i, a member of the parliamentary health and welfare committee, said that hair loss is a type of “social illness.”

“Although it does not accompany physical pain, the stress and alienation can affective one’s social relationships. This can be costly when looking for a job or going on dates,” he said.

Hair loss is a global issue, but studies have indicated that people seem to be more tolerant toward baldness in regions where it is more common. A study by data scientist Albert Mannes of the University of Pennsylvania found that men with shaved heads were rated as more dominant, and men whose hair was digitally removed were perceived as “more dominant, taller, and stronger than their authentic selves.”

But being bald at a young age tends to be costlier in a country where much of the population do not share this view.

It also showed that the perception of balding men appearing less confident was significantly more common among balding men than nonbalding men, indicating that baldness takes a serious toll on one’s confidence.

The aforementioned Mannes’ study did also show that bald men are perceived as looking on average four years older than their counterparts with hair.

In addition, the notion that being bald can get you fired has some validity in Korea.

In 2018, the National Human Rights Commission urged not to penalize bald applicants looking for a job. This was in reaction to a petition filed by a man who claimed to have been fired for being bald and refusing to wear a wig.

Rep. Park Joo-min of the Democratic Party of Korea claimed that adding hair loss treatment to the coverage of the national health insurance system is worth considering. He said that since hair loss treatment is a 110 billion-won market, the added financial burden on the government’s part would be around 70 billion won.

It is unclear, however, how many people would receive treatments once the country starts subsidizing. According to a study in the British Journal of Dermatology, the prevalence of androgenetic alopecia (male pattern baldness) among Korean men of all ages was found to be 14.1 percent.

This means a corresponding proportion of the male population of around 3.5 million could potentially seek treatment once it becomes more affordable. This would drive up the total cost of treatment well over tenfold.

Aside from whether the government can shoulder the increase in fiscal burden, there is the question of whether it is right to use state resources on hair problems, which is by no means a life-threatening condition.

The National Health Insurance does not cover nonessential medical procedures, such as corrective eye surgery and cosmetic plastic surgery.

Lee Sang-yi, a Jeju National University professor and specialist in preventive medicine, berated Lee’s pledge as populist and said there are other more serious diseases that should be covered by public health insurance.

“If hair loss treatment is covered by the healthcare system, other procedures for cosmetic reasons would also have to be considered,” Lee wrote in his Facebook post, calling Lee Jae-myung “irresponsible.”