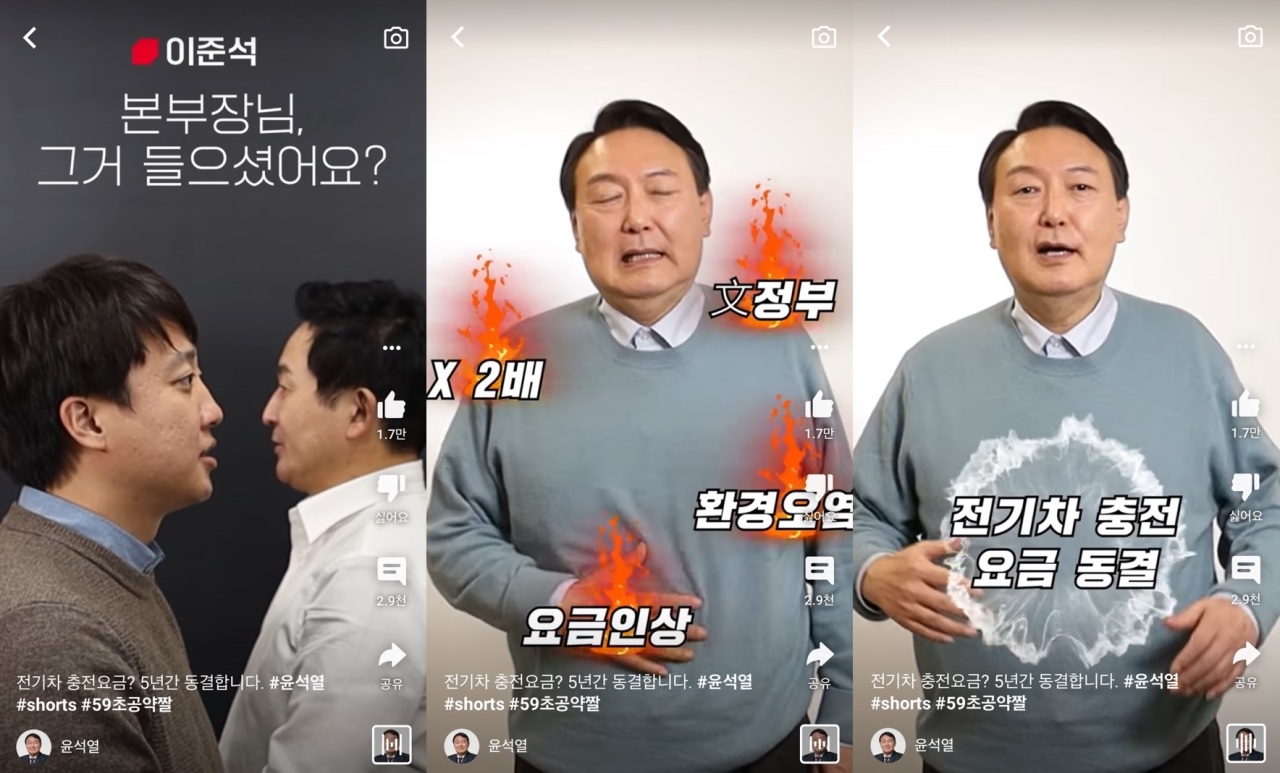 Presidential candidate Yoon Suk-yeol of the main opposition People Power Party appears in a short clip presenting his election pledge to freeze electricity prices in the next five years on YouTube. (Yoon Suk-yeol’s YouTube channel)
As suspenseful music plays in the background, two politicians appear closely facing each other. One politician asks, “Did you know that the Moon Jae-in administration is raising the cost of electricity for charging electric vehicles?”

The other answers, “Who will ride EVs then? What about the environment?” To this, his counterpart says, “We will freeze the electricity prices for the next five years!”

This is the conversation between the main opposition People Power Party Chairman Lee Jun-seok, and the party’s election committee policy chief Won Hee-ryong, in a short-form video on YouTube, spanning just less than a minute.

Ending the 59-second video clip, the party’s presidential candidate Yoon Suk-yeol appears to imitate a digestive medicine advertisement meme. Rubbing his belly and showing his discomfort at the news of the price hike, Yoon then looks relieved at the policy chief’s solution to freeze the price.

Like Yoon, presidential candidates across the aisle are throwing their hats into the social media ring, coming up with witty and light content in the hopes that they go viral.

Presidential candidate Lee Jae-myung of the ruling Democratic Party of Korea is also not missing out in the online battle for votes. On his YouTube channel, Lee posted a short clip of himself telling viewers: “Don’t ‘pluck’ Lee Jae-myung, ‘transplant’ Lee Jae-myung for your hair,” a play on words referring to his previous proposal to review allowing public health care insurance to cover hair loss treatment. 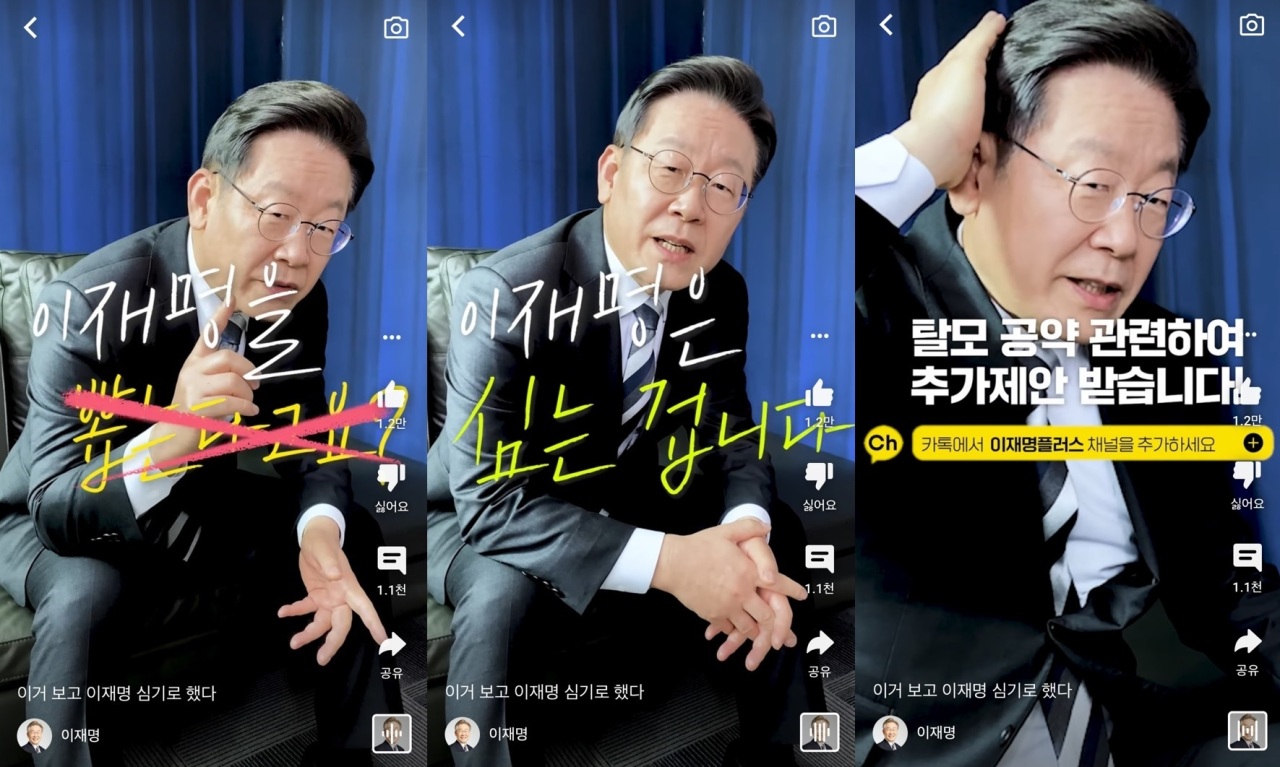 Presidential candidate Lee Jae-myung of the ruling Democratic Party of Korea posted a short clip of himself telling the viewers, “Don’t ‘pluck’ Lee Jae-myung, ‘transplant’ Lee Jae-myung for your hair,” in a short-form video on his YouTube channel. (Lee Jae-myung’s YouTube channel)
Aside from the common social media post of an opinion piece, the main opposition candidate Yoon has also come up with a new way of grabbing attention, by just posting one sentence of his election pledge on his Facebook page.

Against a color background, Yoon uploaded a series of Facebook posts that posts his pledges, such as “2 million won ($1,700) salary for enlisted soldiers,” and “Abolish Ministry of Gender Equality and Family,” without further elaboration.

The introduction of “AI Yoon Suk-yeol,” the digitally-created character resembling the main opposition party’s presidential candidate has also been gaining popularity for its candid answers to questions given by online users.

“Legacy media is breaking down, as various forms of online platforms are proving to have a powerful influence. And the COVID-19 pandemic is speeding up this trend,” Professor Kim said.

“For these online platforms, shorter, quicker and softer content does better.”

“So while the previous elections largely revolved around metacourses of ideologies, the items on the election table this year appear to have softened,” he added.

The campaign committees of the different parties have also come up with self-produced variety shows, which take formats from popular TV shows, and star their candidates.

Lee Jae-myung uploaded “behind-the-scenes” episodes made to look like an entertainment program, showing what happens at his electioneering events, including one that shows him and his wife dancing while wearing a Santa costume.

Yoon Suk-yeol has also been releasing the of a show dubbed “Suk-yeol’s restaurant,” where he appears as the chef to cook for visitors and shares stories about his life and talks about election pledges.

While it is important that the presidential candidates quickly adapt to the changing environment, Professor Kim warned they should not forget crucial aspects of the national agendas, such as reforming the national pension scheme, handling North Korea’s nuclear arms, and fostering new industries.

“The current electioneering of candidates do reflect the changing environment. But the candidates should understand these are only the exterior decorations of their houses.”

“They should remember, a house only exists with a foundation.”