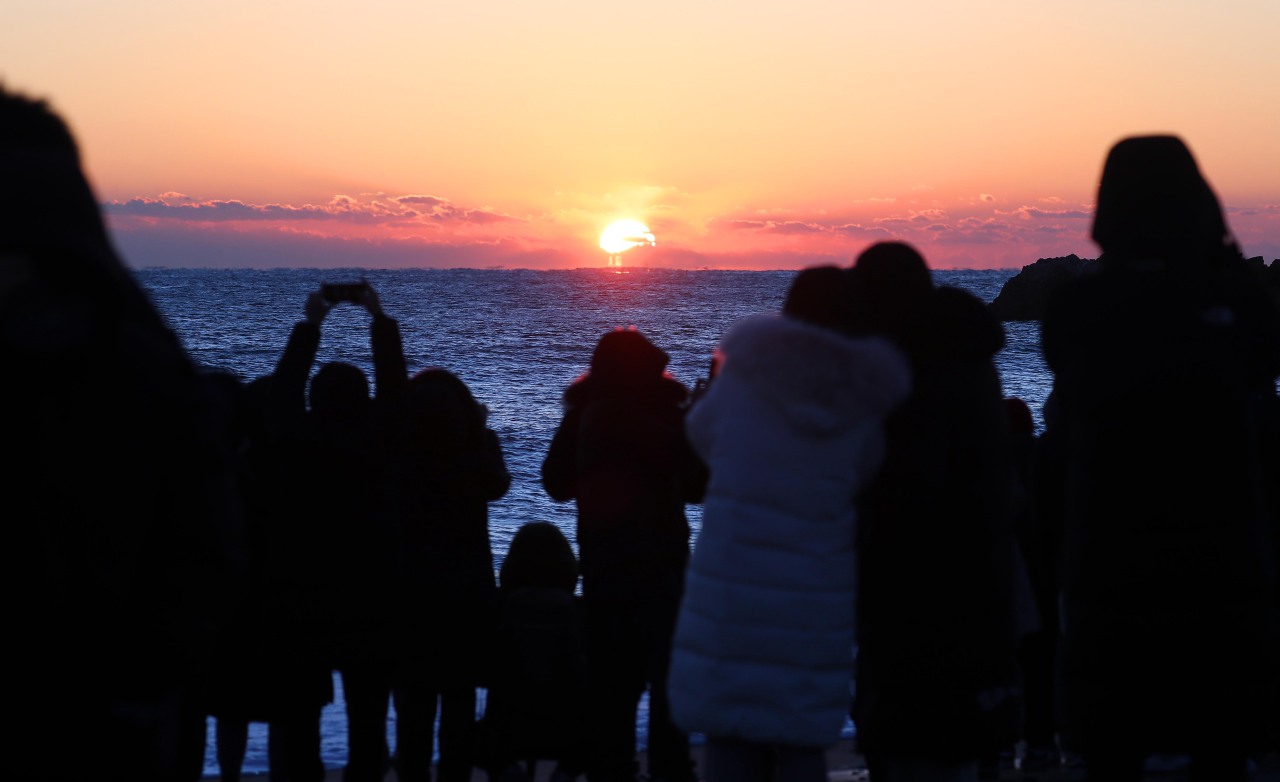 Crowd greets first sunrise of the year at a beach in Gyeongju, North Gyeongsang Province, on Saturday. (Yonhap)

As the third year of the pandemic dawns, the rise of a new variant once again upends previously established calculations about the virus.

Forecasts out there are a mix of bleak and upbeat, with the most optimistic saying omicron could be “the beginning of the end.”

Although it’s still too early to predict omicron’s impact, most experts agree on one point: This winter will be a challenge with an omicron-fueled surge riding on top of the existing damages from delta.

Initial findings have linked omicron with a lower risk of severe disease.

After omicron began dominating the outbreak in South Africa, some scientists there noted that omicron patients are less likely to need hospital care and tend to stay in the hospital for a shorter period of time.

Outside of South Africa, data from the US and UK have indicated a similar reduction in hospital admissions and deaths in late December despite a sharp rise in omicron cases -- in what may be a further sign that the new dominant virus causes less severe disease than its predecessor, delta.

Some explanations are emerging as to why this might be.

A recent study on mice and hamsters by Japanese and American scientists found omicron does not damage the lungs as badly, with the infection mostly present in the upper airways. This is consistent with an earlier research from Hong Kong that omicron replicates less efficiently in the lung cells compared with the previous variants.

Omicron and the brighter prospects associated with it have prompted some rosy promises from Korea’s top government health officials.

Kwon Jun-wook, the Korea National Institute of Health’s director, said in a radio interview on Dec. 31, “We can return to normal life in the coming year, and we should.”

And omicron was expected to help that transition. “So far omicron symptoms have been mild,” he said, adding that an official verdict on the variant’s severity was going to become available soon.

Other experts are more wary of underestimating the potential perils. An omicron wave, almost certain to drive up cases, will be detrimental for Korea, they say.

Dr. Lee Jong-koo, who led Korea’s response against the 2009 flu pandemic as then-director of the Korea Centers for Disease Control and Prevention, says leaders and pandemic policymakers must “put aside the urge to open up and tread carefully through this winter.”

Omicron arrives on Korea’s doorsteps as the country struggles to clean up the mess from the sudden ditching of restrictions in November. Through much of December hospitals were filled to the brink, leaving an unprecedented number of patients to die waiting for a bed.

If there is one lesson to take away from the latest scramble after declaring a return to normal, it’s that there is a limit to what the current vaccines can do in the absence of restrictions, Lee said.

The assessment that omicron is milder is premature, and even if it were true, omicron is “still COVID-19,” he said. “‘Mild’ COVID-19 can still be pretty bad.”

Dr. Jerome Kim, director general of the International Vaccine Institute based in Seoul, said some of the key vaccine questions were still waiting to be answered with omicron, like whether a booster beyond the third dose is going to be necessary, and if so, whether it would be with a variant-targeting vaccine or with the same vaccine.

Omicron has a multitude of mutations that help it evade vaccines and antibody treatments to some degree. Vaccine effectiveness against infection appears to be 20 to 40 times lower when omicron is the target, he said, though still highly protective against hospitalization.

“New variants with many more mutations, like omicron, does shift the balance toward boosting immediately,” Kim said.

Kim said that even if omicron is less severe than delta, it’s important to remember that delta was still way worse than alpha, or the UK variant as it was known then, which emerged at the turn of last year. “Alpha looks like the good old days.”

As the world waits for more science on omicron, maintaining restrictions were in order, he said.

“I think we will have (to have) the current restrictions until the issues with ICU capacity are settled, hopefully in the first two months,” he said. “Let’s hope things are a lot more settled when omicron hits.”

So what comes after the treacherous omicron winter?

The World Health Organization’s chief Tedros Ghebreyesus said in a Dec. 29 press briefing that though the virus won’t disappear, the acute stage of the pandemic may end in 2022.

Dr. Anthony Fauci, the chief medical adviser to US President Joe Biden, told a local broadcaster on Dec. 22, it’s “entirely conceivable” to reach “a degree of immunity in the community” either through vaccination or natural infection so that the virus is no longer dominating people’s lives.

“We are not going to be in a situation of this degree of intensity indefinitely, for sure,” he said.

Onetime Korea CDC chief Lee thinks some behavioral changes and health practices picked up over the pandemic, such as mask wearing, may last through the next few years.

Lee said that as the pandemic drags on, the risk of a new variant popping up and rewriting what we know about the virus is a constant danger.

Part of what makes COVID-19 so hard to tame was its lack of seasonality, he said. “Flu is there for a season. COVID-19 is all year around.”

The first step in beating public fatigue may be “openly acknowledging that we’re probably in this for the long haul, rather than promoting false hope and then letting people down,” he said.

All is not despair. Compared to a year ago more tools were at our disposal, like antiviral pills, to render the disease more manageable.

“We may suffer some setback with omicron, but it doesn’t mean we’re starting over,” he said. “We may not be where we want to be yet, but we’ll get there eventually.”