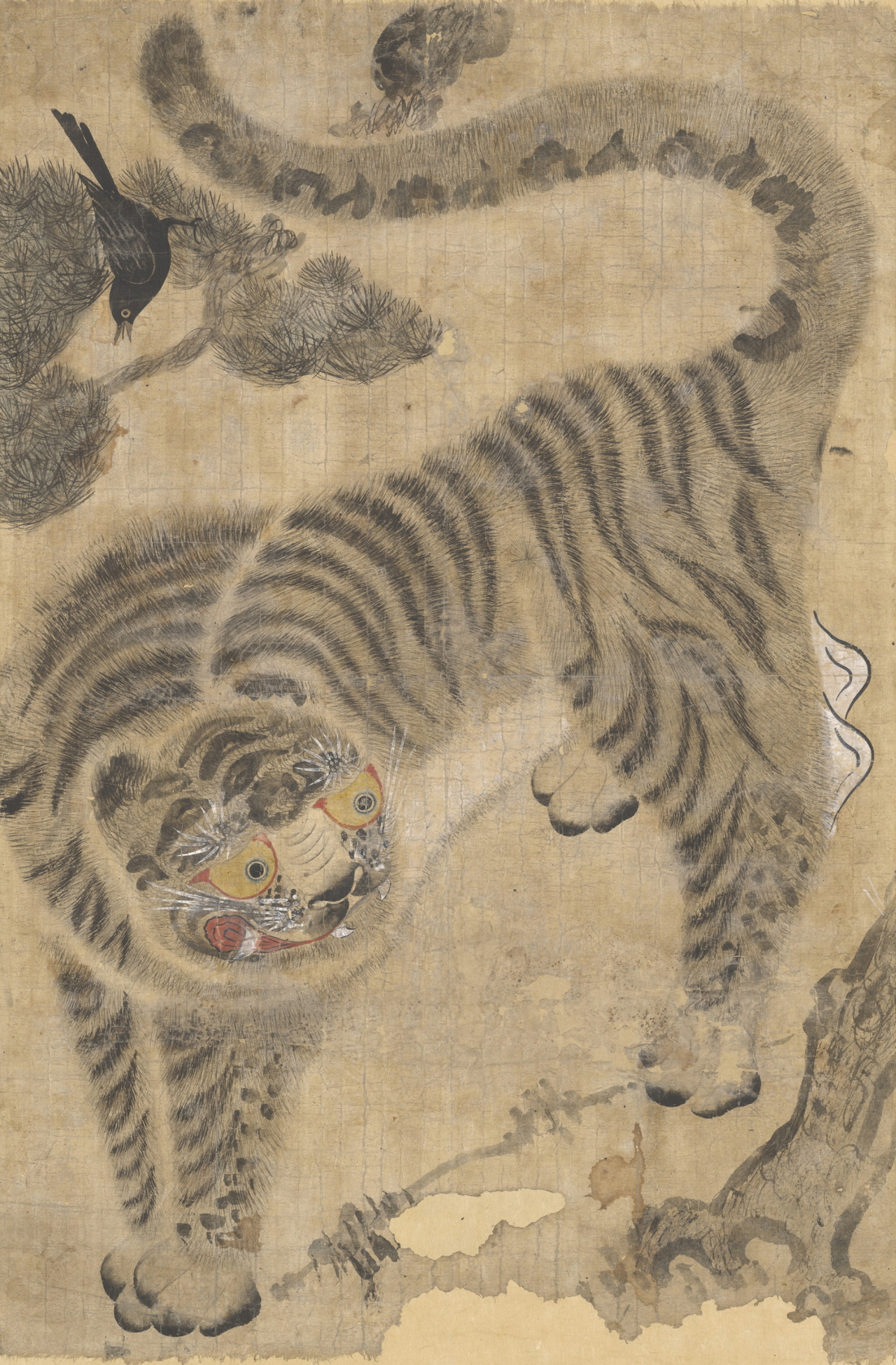 “Tiger and Magpie” from the late Samsung Chairman Lee Kun-hee’s collection. The painting was created in the 19th century. (NMK)
After winning the John Newbery Medal for the most distinguished children’s book in 2020 with “When You Trap a Tiger,” author Tae Keller said the book was inspired by a folktale that her Korean grandmother used to tell her.

The Korean folktale she was referring to was “The Sun and the Moon” that centers on two siblings and a tiger. Keller’s storybook also includes a tiger from a Korean folklore which appeared at a grandmother’s house to find something that was stolen.

During the exhibition “A Great Cultural Legacy: Masterpieces from the Bequest of the Late Samsung Chairman Lee Kun-hee” at the National Museum of Korea, held from July to September this year, there was a painting of “Tiger and Magpie” from the 19th century during the Joseon era. 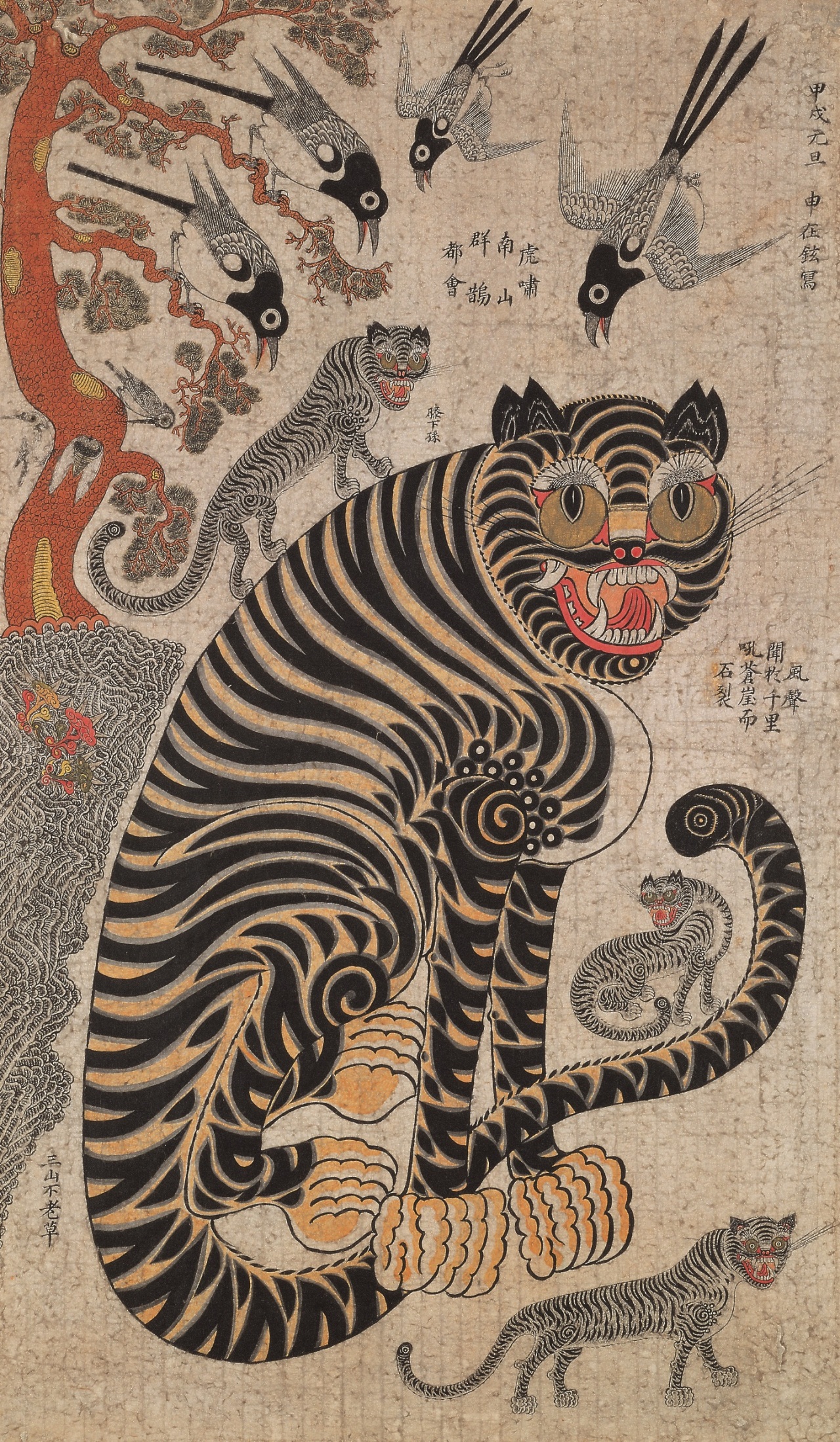 “Tiger and Magpie” by Shin Jae-hyun from the 19th century (Leeum Museum of Art)
The appearance of Keller’s tiger character and the tiger in the painting were not mere coincidences. Appearing frequently in Korean legends and art pieces, the animal is considered a national symbol and is associated with humor, bravery and nobility.

According to the Academy of Korean Studies’ database on folk literature, 1,283 stories include animals of the 12 Chinese zodiac signs. Among them, around 40 percent of them have a tiger in them.

During the Joseon era, tigers were considered the strongest beast that can provide protection and also a symbol of a person of virtue, so many hung paintings of the animal in their homes with hopes that they would drive away evil spirits and evoke blessings. 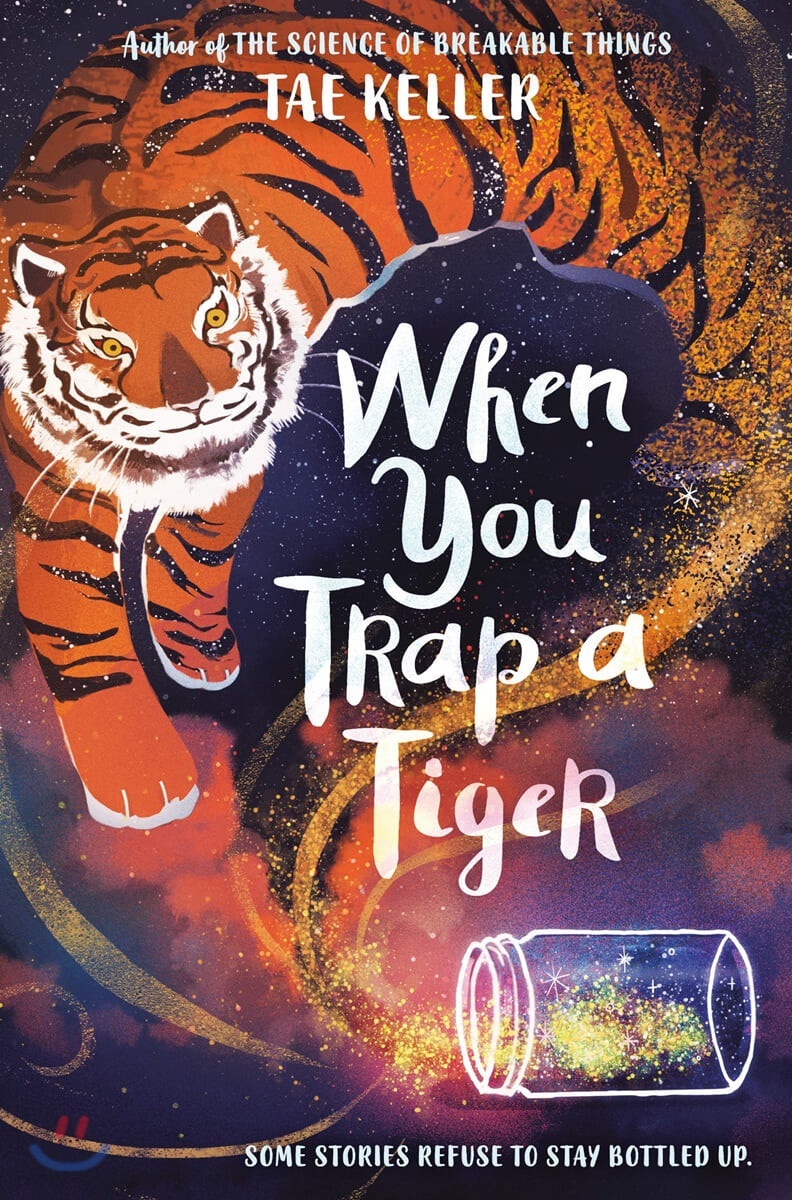 “When You Trap a Tiger” by Tae Keller (Tae Keller’s website)
How did the tiger become so popular?

Tigers have been with Koreans from the very beginning.

The “Dangun Wanggeom” legend, which tells the story of how the first Korean kingdom was established, also has a tiger character in it.

In the legend, a tiger and a bear ask Hwanung -- the son of Hwanin, the lord of heaven -- to transform them into humans. Hwanung tells them they can become human if the two only eat garlic and sacred mugwort for 100 days while staying in a cave without seeing the sunlight. However, the impatient tiger gives up shortly after. The bear stays in the cave and on the 100th day, the bear becomes a woman and later becomes the mother of the founder of Korea’s first nation.

“It makes more sense to have more stories about bears since the legend says that the bear is the one that became human, but it is difficult to see folktales with bears in them in Korea,” National Folk Museum of Korea curator Kim Hyung-joo told The Korea Herald.

Although the specific reason behind the tiger’s influence on Korean culture remains a mystery, Kim said it could be partially due to its familiarity.

“Tiger Under a Pine Tree” by Kim Hong-do from the late 18th century (Leeum Museum of Art)
“There used to be lots of tigers in Korea. Different from now. Now we can only see them in zoos,” Kim said. ”There are also some records written by foreign travelers that show there were lots of tigers on the Korean Peninsula.“

According to Kim, “Korea and Her Neighbors” written by Isabella Bird Bishop around 120 years ago says, “Joseon people hunt tigers for half a year, and tigers hunt Koreans for the other half year.”

“To Koreans, the tiger is an animal that holds the emotions and culture of our people,” National Folk Museum official Kang Kyo-pyo said in the “Encyclopedia of Korean Folk Symbols: Tiger.”

Love for tigers ongoing in K-pop 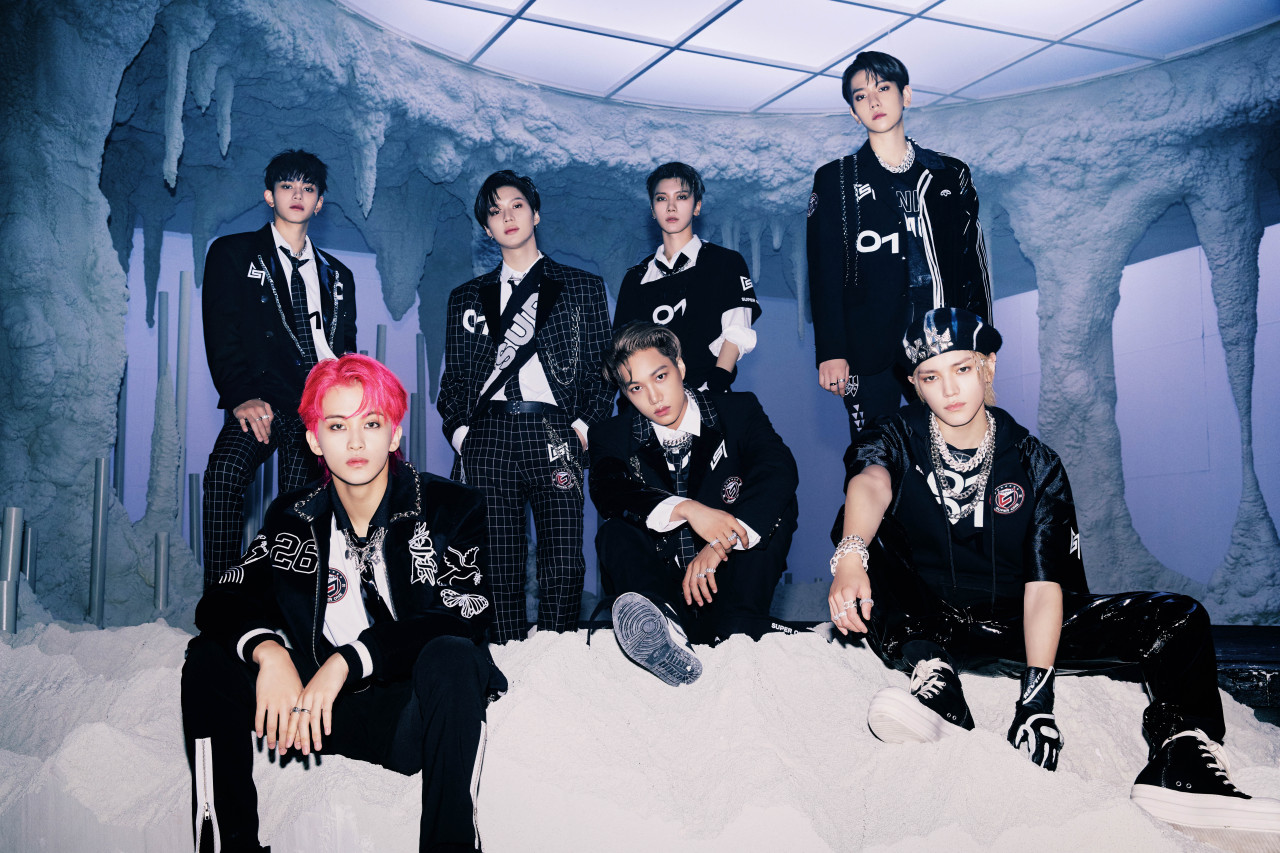 K-pop boy band SuperM (S.M. Entertainment)
Last year’s hit K-pop song “Tiger is Coming” by traditional Korean music-inspired band Leenalchi also tells a story related to a tiger. It is a reinterpreted song of the verses from the pansori “Sugungga,” a traditional type of narrative singing.

In the song, a turtle who comes on land to get a rabbit’s liver, a cure for an ailing Dragon King, mistakenly calls up a tiger instead and this mistake causes a commotion.

Leenalchi featured this song in the Korea Tourism Organization’s “Feel the Rhythm of Korea” promotional campaign video, which recorded more than 600 million views from around the world.

“We chose the tiger to show the color of SuperM. It (The tiger) was chosen to show the synergy and concept that the seven members have. The song brings out the inner beast hidden in everyone,” an S.M. Entertainment official told The Korea Herald. “We also created a choreography that was inspired by the movement of a tiger. There is a growling sound in the song itself as well.” 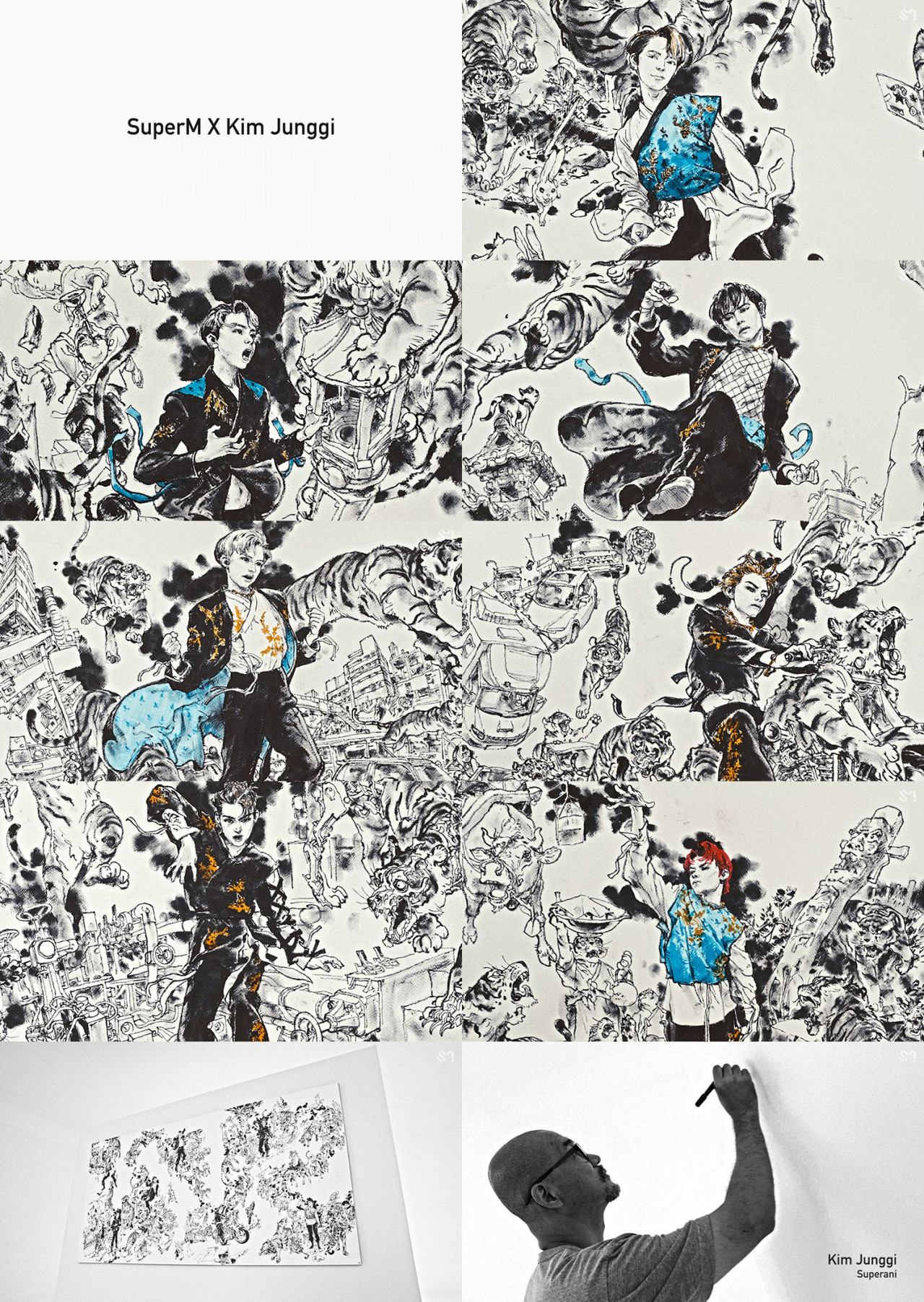 There are lots of illustrated characters and mascots of tigers that show Korea’s national identity.

Local illustration brand Muzik Tiger is a notable example. The brand, which is known for its cute orange tiger character, has been collaborating with various firms like LocknLock, Pascucci, 7-Eleven and Gucci. 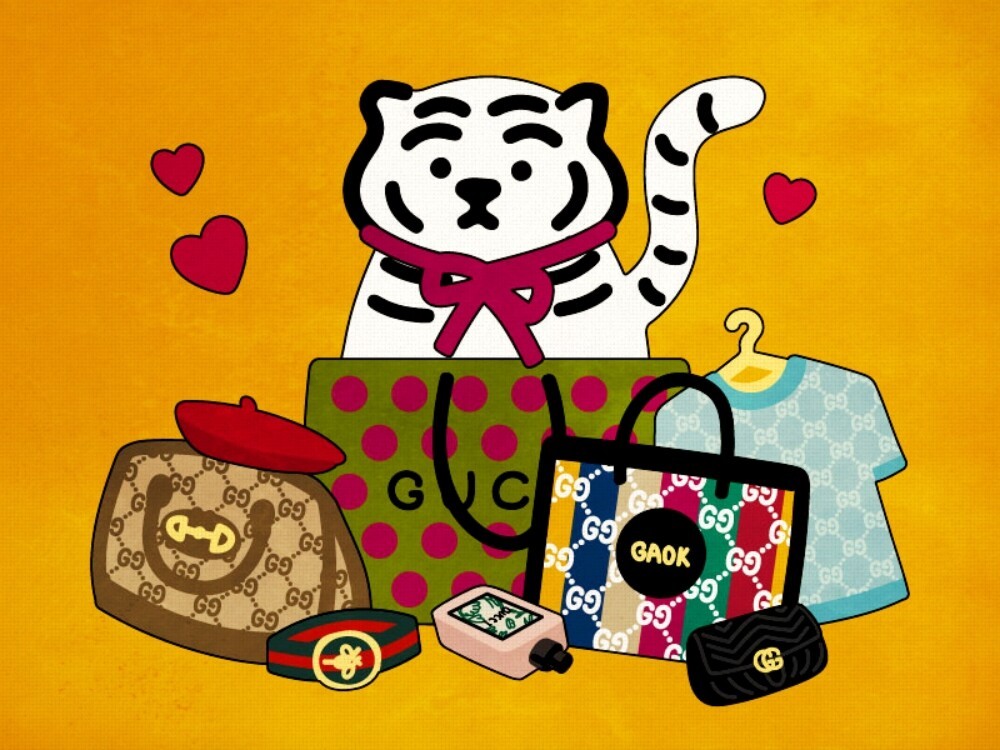 “No matter how much we tried to make an American-style or European-style design, it was different from the ones that are created originally from America or Europe. We did not see a good result from them,” Song said. “When we tried blending in a Korean style, that was when we saw some meaningful results.”

Song said this is why when he started his own illustration company, he chooses the tiger, an animal he thinks can show Korea’s identity, to do business.

National Folk Museum of Korea curator Kim explains that the tiger started being a symbol of Korea around the early 20th century, thanks to Choi Nam-seon who was the first person to draw a map of the Korean Peninsula in the shape of a tiger. The map has since sparked a plethora of re-creations.

The symbolic image also became stronger when it was used to represent Korea in international sports events.

At the 1988 Summer Olympics in Seoul, an orange Amur tiger named Hodori became the official mascot. The Seoul Olympic committee at the time said the tiger was chosen because it is a familiar animal to Koreans and has a courageous image.

At the 2018 Winter Olympics in PyeongChang, a tiger once again appeared as the mascot. Soohorang is a white tiger, which is considered a sacred guardian animal in Korea.

“When the white tiger Soohorang was chosen as the mascot for the PyeongChang Winter Olympics, many people called the Soohorang as a direct descendant of the Hodori,” National Folk Museum of Korea curator Kang said in “Encyclopedia of Korean Folk Symbols: Tiger.”

“It is believed that Soohorang has inherited the emotion of the national brand tiger, which has become a symbol of Korea during the Seoul Olympic Games.”