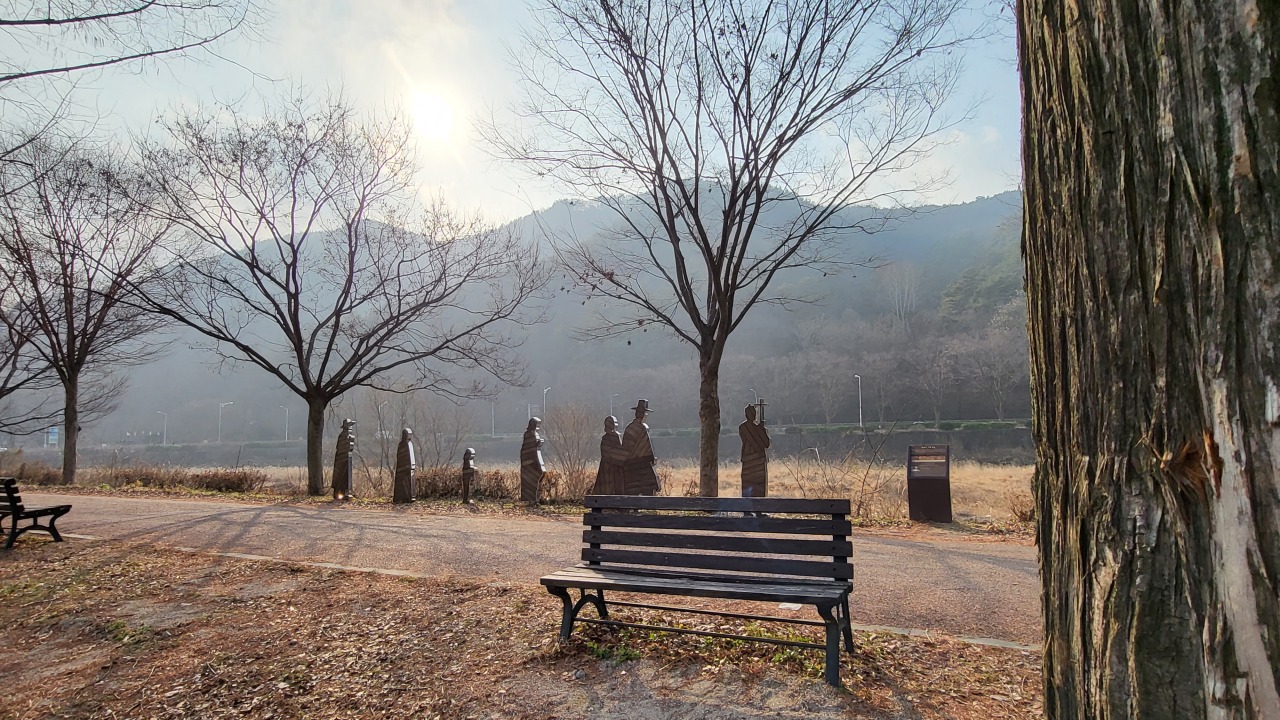 Designated by the Culture Ministry as one of the five “Tourism Hub City Development” project cities in 2020 -- along with Busan, Gangneung, Mokpo and Andong -- the city is stretching its wings to greet global visitors who wish to experience Korea beyond what its densely populated urban centers have to offer.

Over the past decade, the number of foreign tourists flocking to the country has more than doubled, but their visits have been concentrated in only a few major cities. Accordingly, the Korea Tourism Organization plans to foster representative tourism cities that have unique potential to attract foreign tourists.

Jeonju, capital of the Later Baekje Kingdom, established in the year 900 by King Gyeon Hwon, served a crucial role as the administrative center of Korea. The city contains traditional cultures that became pillars of Korean lifestyle, including hanok housing, hansik gastronomy and rich arts and crafts such as hanji, which blossomed thousands of years ago.

The Korea Herald introduces some main travel destinations in the order of past to present. 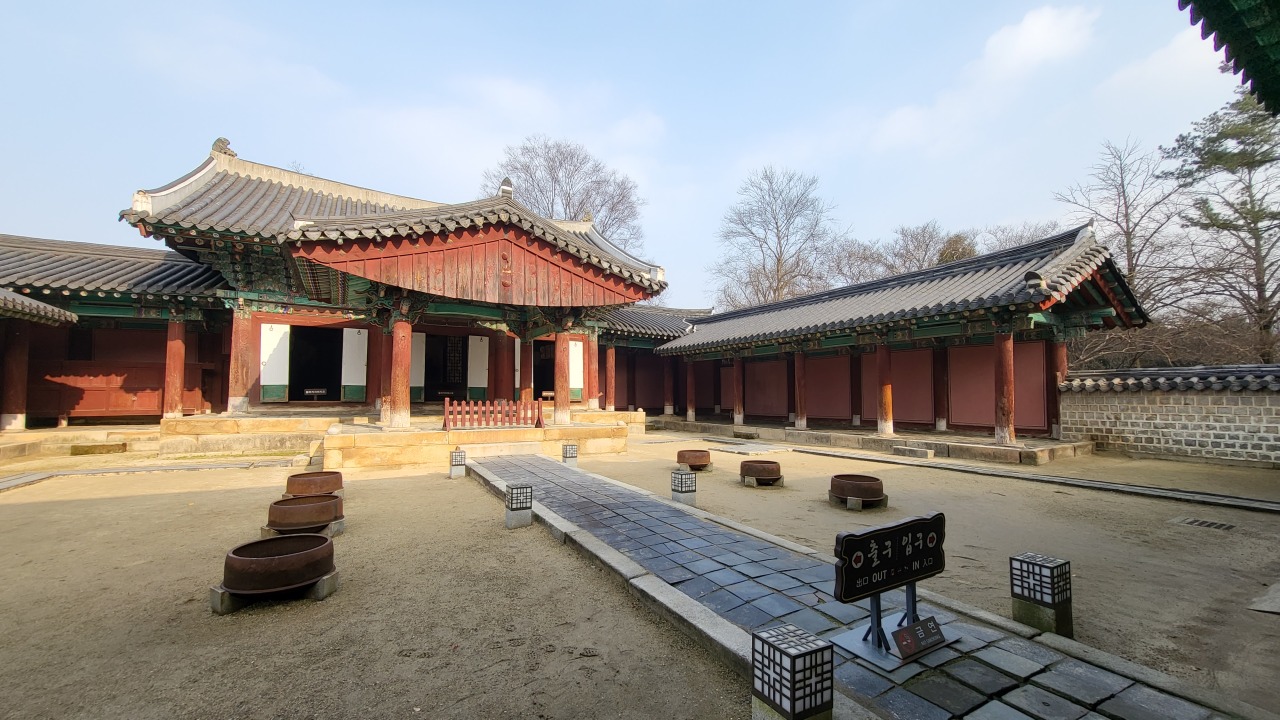 Main hall of Gyeonggijeon (Kim Hae-yeon/The Korea Herald)
Jeonju is the hometown of King Taejo (Yi Seong-gye), founding monarch of the Joseon era (1392-1910). The Gyeonggijeon Shrine was built in 1410, the 10th year of the reign of King Taejong, son of King Taejo, to enshrine the portrait of King Taejo. The shrine had been destroyed in 1597 during the Imjin War, provoked by Japan to invade Joseon, and was later rebuilt in 1614.

Upon entrance, visitors cannot miss Gyeonggijeon‘s dismounting post. The post denotes where one should dismount from their horses, and were commonly found at the entrances of royal palaces or Confucian academies where propriety was valued. A typical dismounting post would have a single base beneath a body stone, but Gyeonggijeon’s has two distinctive lion statues that hold the body, interpreted as female and male guardians protecting the shrine.

The main hall consists of a ritual section in the center and two auxiliary wings on either side. In the rear of the ritual section stands a room for enshrining the royal portrait. Various rituals were performed under and in front of a protruding roof seen in the center. The shrine today also acts as filming location for popular historical drama series and movies.

Walking east within the shrine, the Royal Portrait Museum can be found. Established in 2010 to mark the 600th anniversary of the enshrining of King Taejo’s portrait, the museum includes exhibits of artifacts used for the enshrinement ceremony and relics related to Gyeonggijeon. 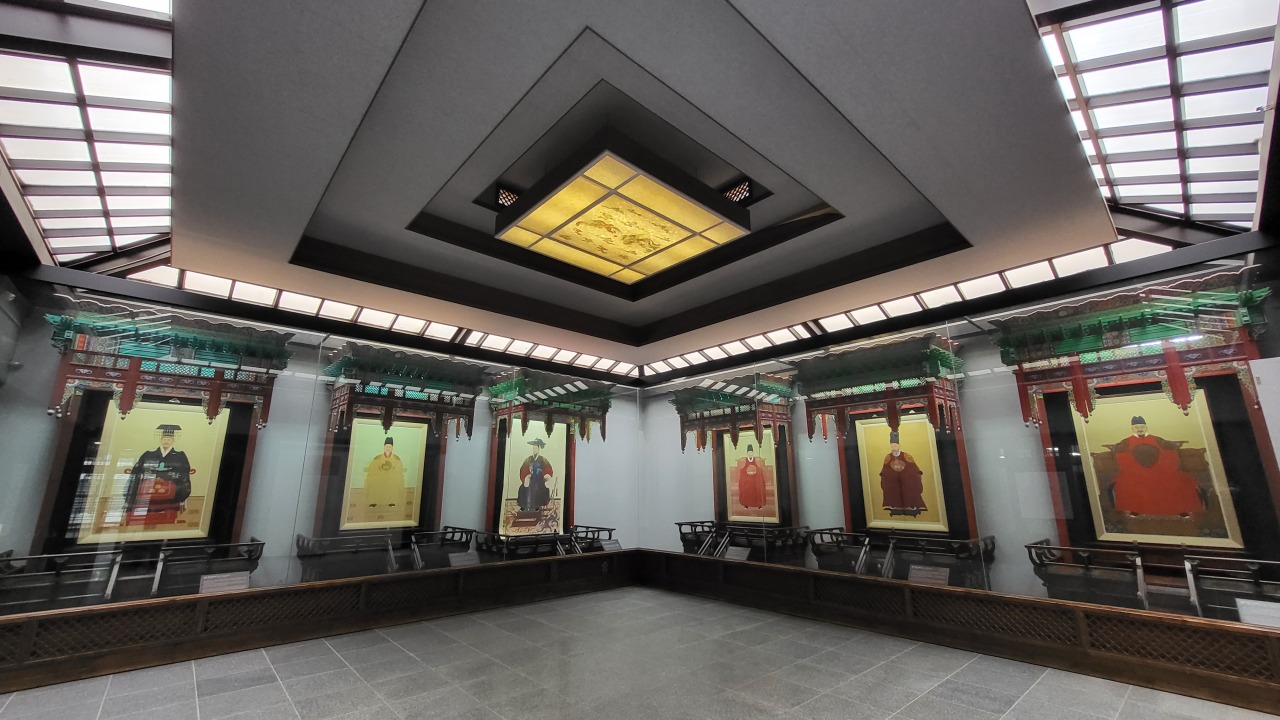 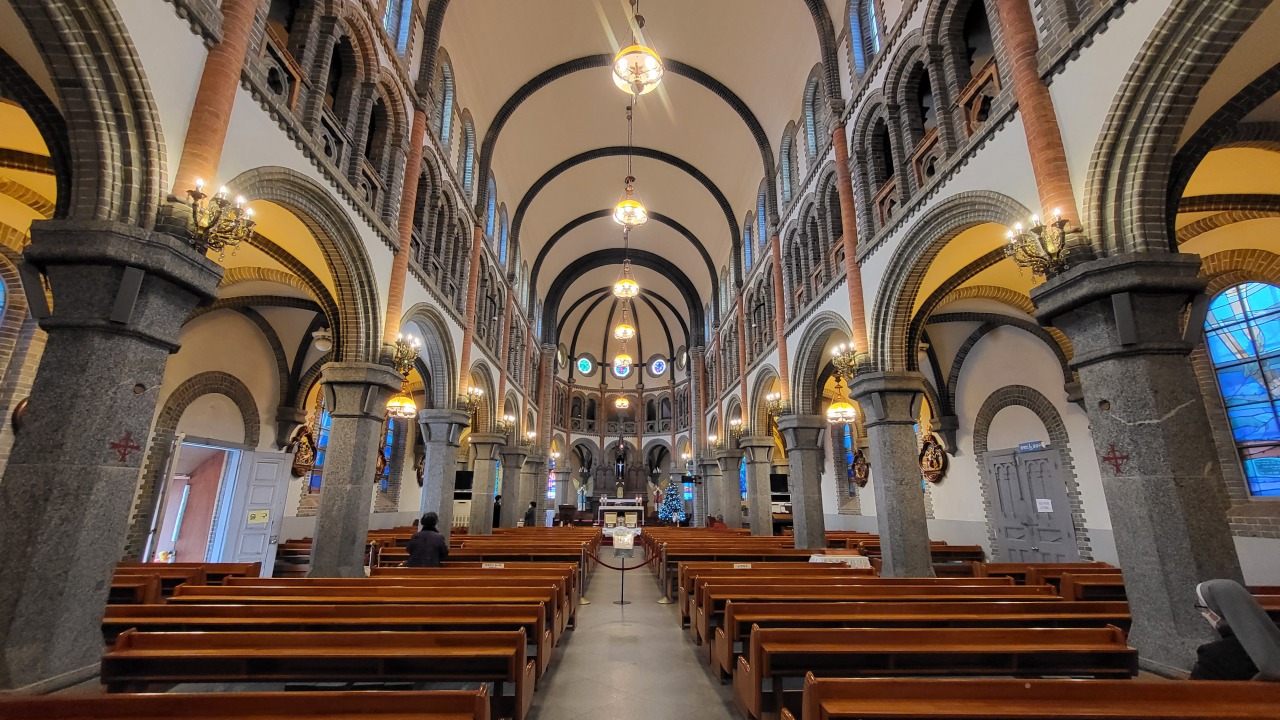 Inside the Jeondong Cathedral, with antique beauty preserved in stained glasses (Kim Hae-yeon/The Korea Herald)
The Jeondong Catholic Church is the first martyr’s site where Paul Yun Ji-chung and his peer James Kwon Sang-yeon were executed after persecution in 1791 for following religious doctrines concerning a family death.

In the spring of 1891, 100 years after the two saints’ martyrdom, the mission work started, preparing a base at the site of their martyrdom. The first provost, French Father Baudounet, started building the church in 1908, and Father Poisnel, who designed Myeongdong Cathedral in Seoul, completed the construction in 1914. It took some 23 years from the beginning of construction to presentation.

Although met with harsh criticisms by Confucian scholars at the time, the church became the origin of propagation across the area of the Jeolla provinces. The Romanesque-style building with its main bell tower and two small towers on both sides adds a cubic effect, making an ascending view toward the sky.

Regular Mass schedules are posted at the entrance for tourists to avoid the designated times.

If interested in the Catholic history of Korea, one can visit the Shalom House, newly opened in October, near Chimyungjasan, the Martyr’s Mountain Shrine where the seven Catholic martyrs of 1801 are buried. 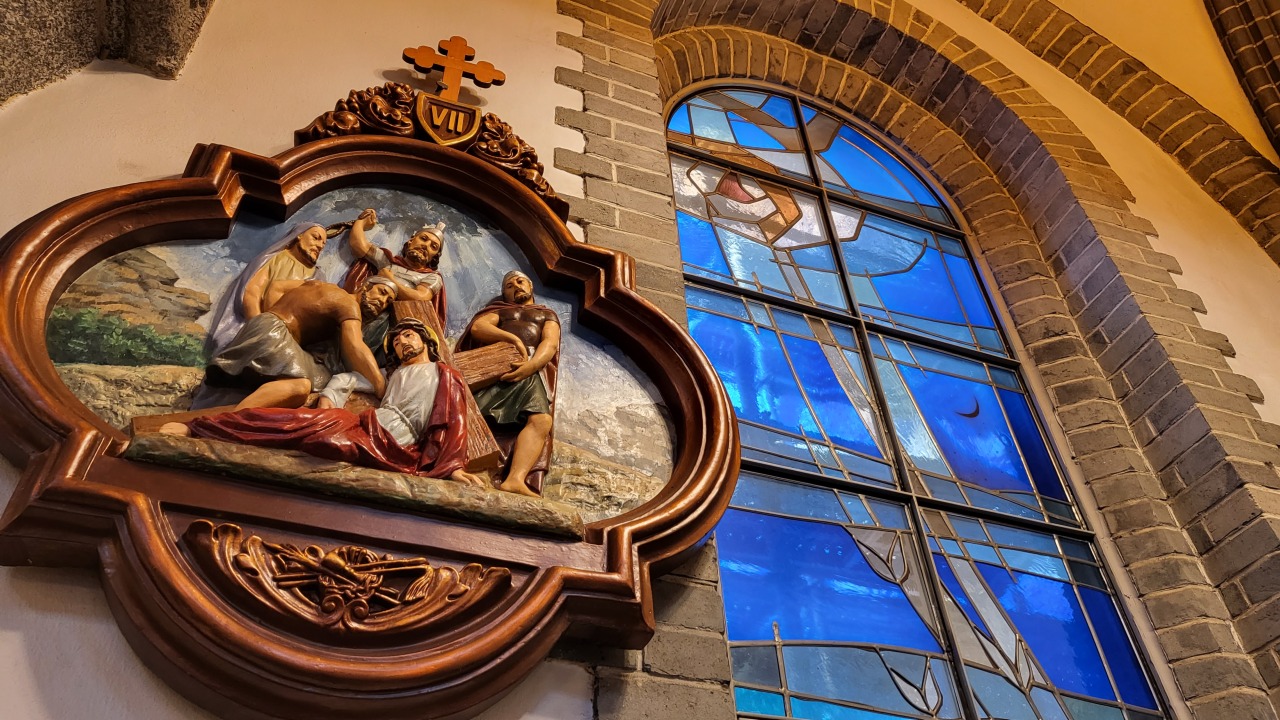 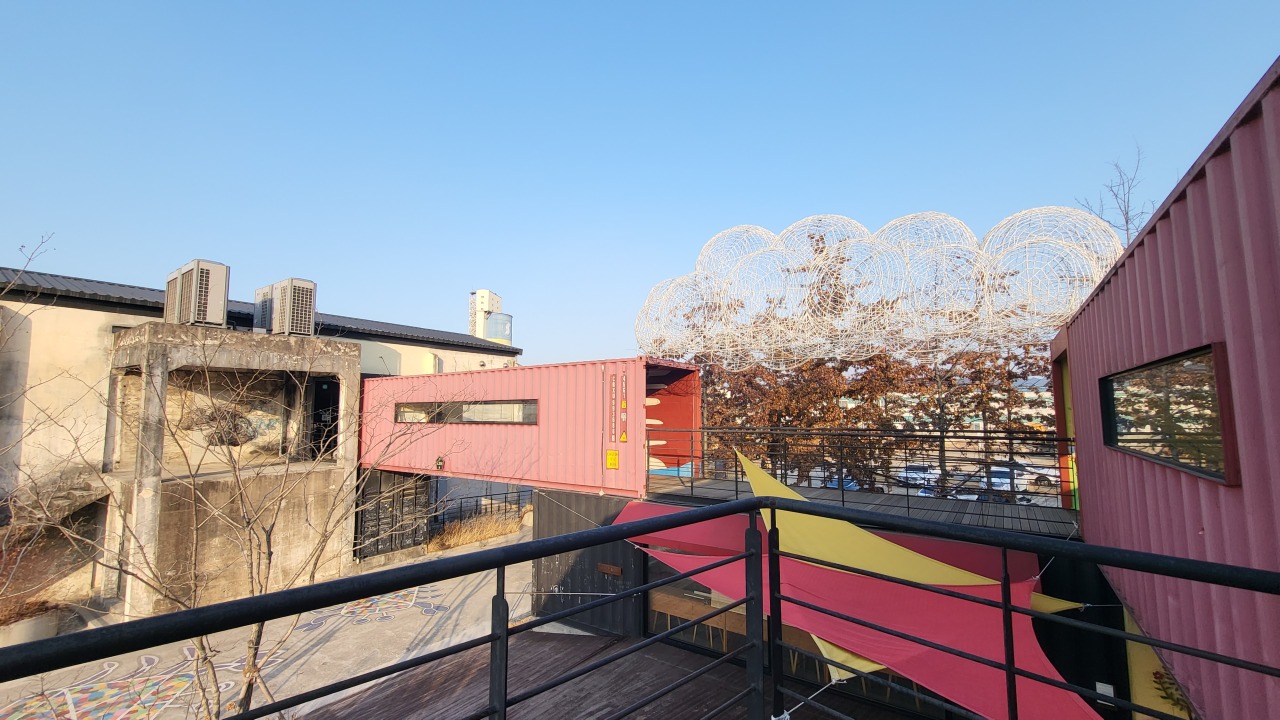 View of Palbok Art Factory (Kim Hae-yeon/The Korea Herald)
One will be surprised to find out that the now hipster-like gallery with rusty shipping containers and old installations, is the architecture that shaped the actual cassette tape factory in the 1980s.

The once torn-down factories with only disinterested passersby were revitalized in 2016, when the city decided to turn the abandoned town into a place for emerging artists to use as art studios and exhibition halls, inviting the public.

Modeled after the Tate Modern art gallery in London located in the Bankside Power Station, the Palbok Art Factory holds documents, photographs and documentary videos that tell of the harsh working environment of workers at the time, along with some heartwarming memories to share.

“I first landed in this building in my early 20s, and now I see cheerful visitors who are now in their 20s,” A cashier at the first floor dining cafe who previously worked at the cassette tape factory told The Korea Herald. “I feel happy to see the building still present with a more brightened mood.”

The place works for visitors looking to delve into the contemporary history of Korea, or those who simply wish to enjoy arts and crafts presented by budding artists. 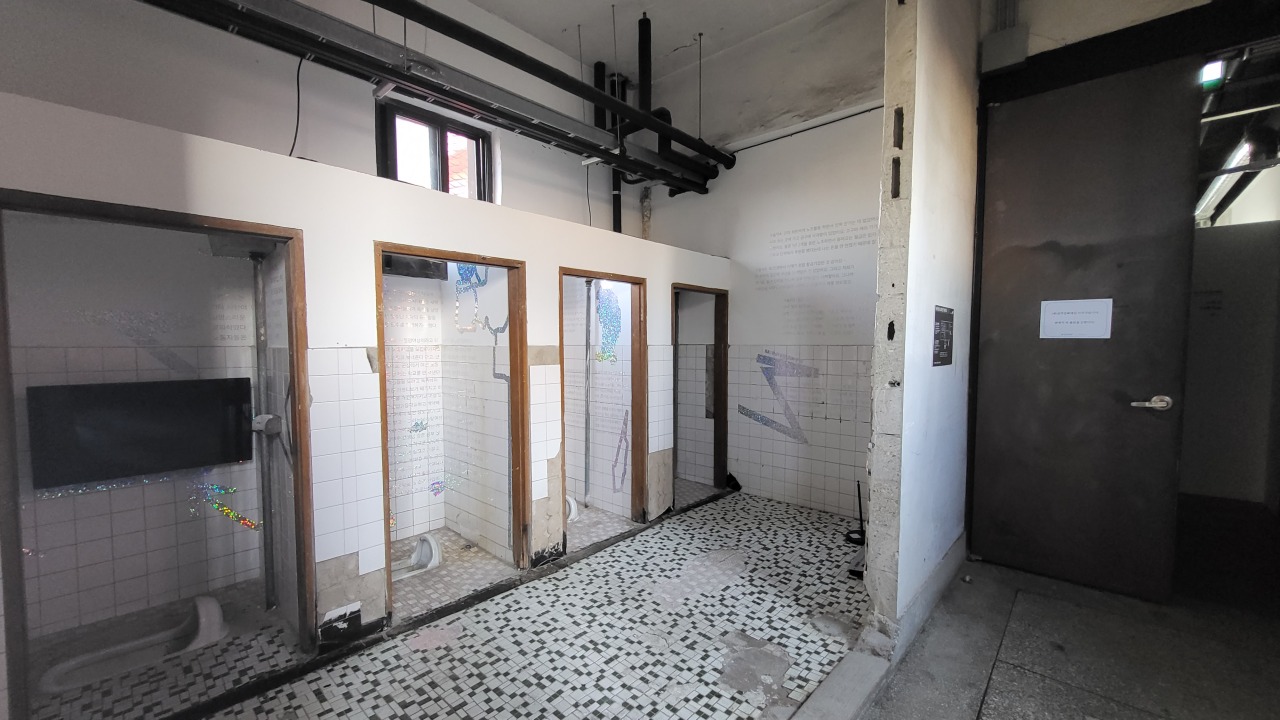 The actual restroom in the factory has turned into an art installation, with aims to show and record the harsh working conditions of some 300 women workers in the 1980s. (Kim Hae-yeon/The Korea Herald)
2020s: Haksan Forest Library 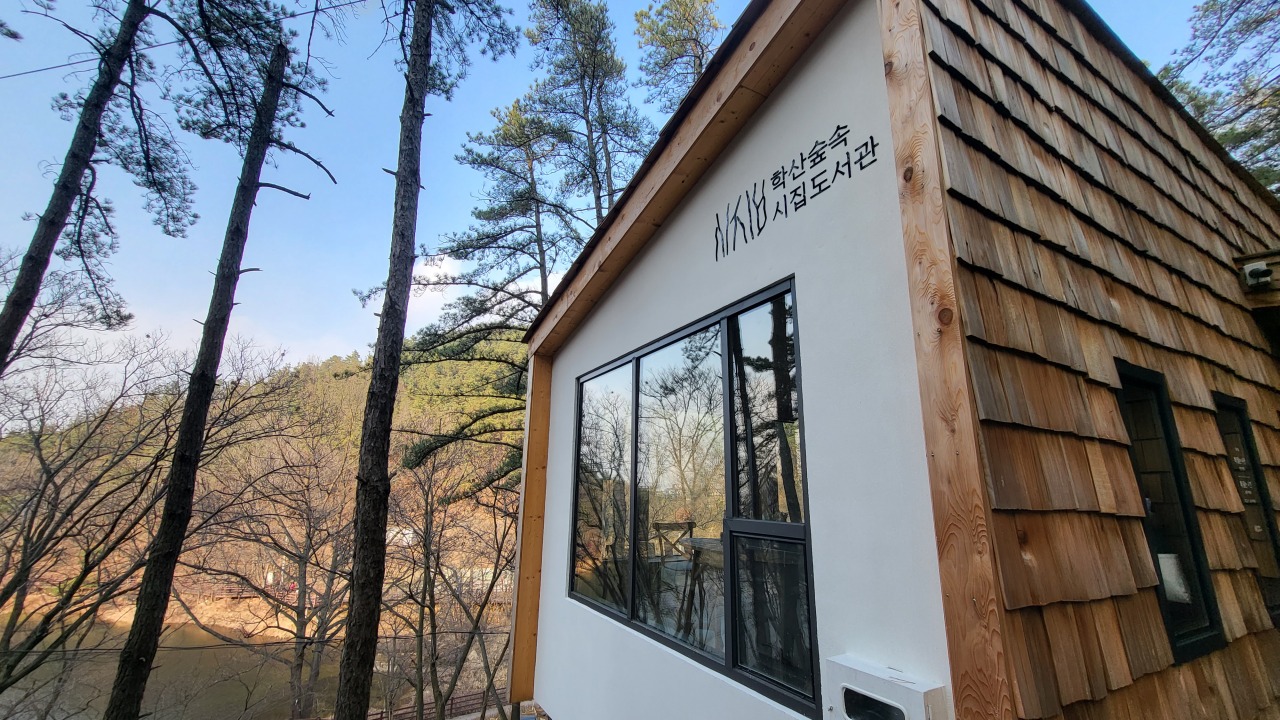 Haksan Forest Library, located near the gateway to the Haksan mountain trail (Kim Hae-yeon/The Korea Herald)
As part of Jeonju’s vision to be named a city where “books become part of life,” five specialized libraries have opened their doors to the public since April. The Haksan Forest Library is one located in the midst of a serene lake surrounded by Haksan. The library currently stores some 1,813 books of poetry, novels and foreign literature.

The purpose is for city dwellers and visitors to casually drop by the library and feel that literature is not so distant from our lives.

“We hold about 130 foreign books, but have not seen many foreign guests come,” said Ju Jeong-hwa, head of the city‘s Special Library Team. “On top of the regular reading sessions held in Korean, we are planning on hosting English book clubs and reading events for the upcoming year.”

The Haksan Forest Library opens from 9 a.m. to 6 p.m., and closes on Mondays. Updates on book events and schedules can be found on its Instagram page. 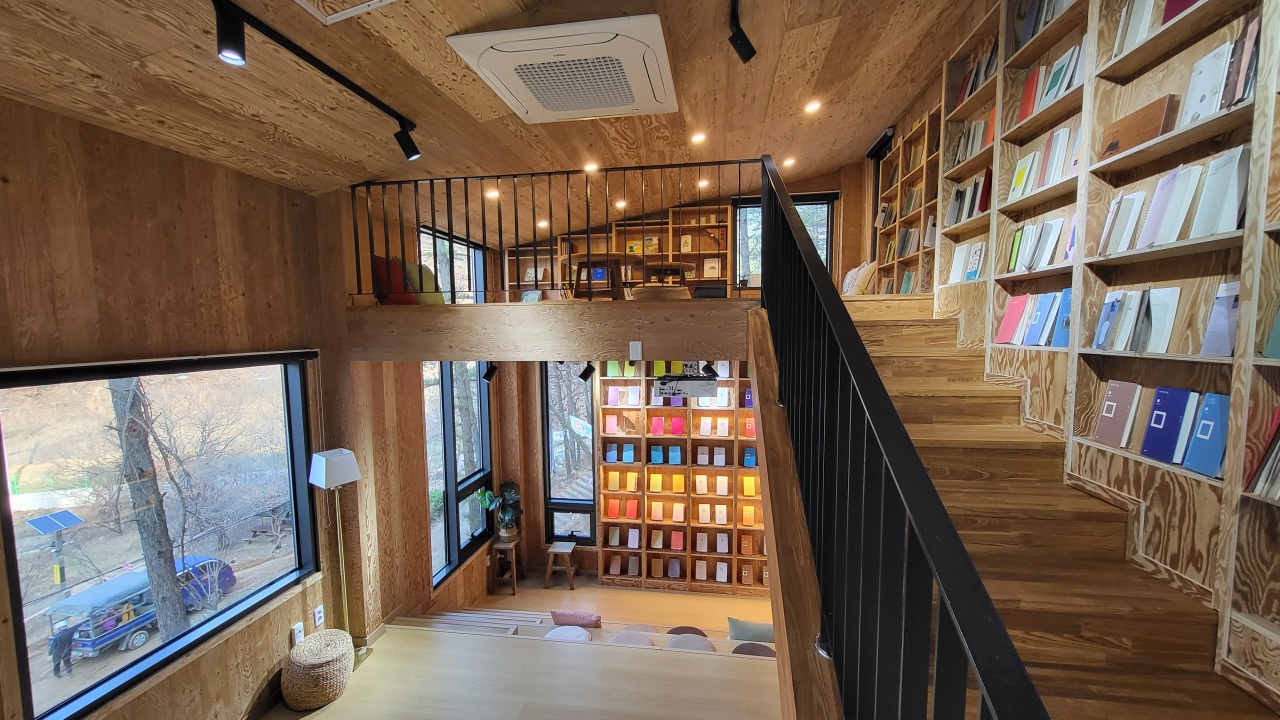