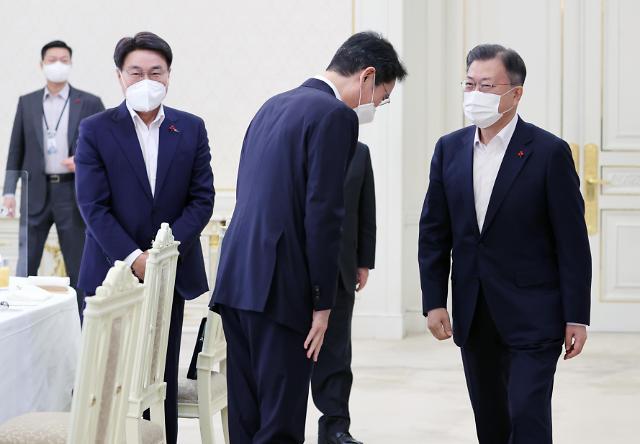 According to Cheong Wa Dae spokesperson Park Kyung-me, President Moon congratulated the Hyundai Motor chief for the automaker’s advancement in the European electric vehicle market and said, “I wish for Samsung and Hyundai to collaborate more closely on automotive chips.”

“Both Samsung and Hyundai chiefs didn’t show a particular response to Moon‘s remark,” an industry source close to the matter said.

The president‘s surprising suggestion came amid growing concerns over delayed car manufacturing due to an ongoing chip shortage.

While some express the need to collaborate more in areas of batteries and information and communication technologies, South Korea’s No. 1 and No. 2 companies have been keeping their distance for years in a veiled rivalry. The chip shortage, and an eventual suspension in vehicle deliveries, dragged down Hyundai Motor’s October sales 20.7 percent on year globally.

“Telecommunications and vaccines are alike in that they are vital infrastructure. Preemptive investments must be made to utilize them when we really need them. Preparations for 6G are made internally,” Lee told Moon.

During the luncheon, which was attended by the leaders of six conglomerates -- Samsung, Hyundai Motor, SK, LG, Posco and KT -- Moon thanked them for joining the state-led job creation campaign for young people.

“Six conglomerates have promised to create some 180,000 jobs over the next three years, and support job training and starting new businesses. I thank these six companies once again for stepping up to create jobs for the youth,” Moon said.

“It’s fundamentally a company’s role to create good jobs and the government’s role to provide as much support as possible,” Moon added.

SK’s Chey told the president that the company has been gearing up to commercialize its first homegrown COVID-19 vaccine, while Posco’s Choi demonstrated the steelmaker‘s development of hydrogen-based steel to significantly cut carbon emissions. The LG chief also expressed his gratitude for the government’s efforts in stabilizing supply of lithium and cobalt, core resources for batteries.

The meeting drew attention as it was Moon and Lee’s first encounter since the Samsung executive’s parole in August. Lee, who was serving time in prison from January through July, couldn’t participate in a presidential luncheon that was held in June.

The industry is watching closely whether Moon, who excluded Lee from a presidential New Year’s pardon granted on Christmas Eve, will give him a belated present, such as lifting his employment restrictions, for keeping his end of the bargain for parole.

When Lee was released on parole in August, Moon delivered a speech in which he said, “There are a lot of people who have high expectations for (Lee’s) role in chips and vaccines.”

Lee answered to Moon by investing $17 billion in a new chip plant in Texas and securing Moderna vaccines for the Korean people via Samsung Biologics.

“After his parole, Lee worked hard to live up to the expectations of the Korean people under difficult circumstances, so Moon might have delivered a special message (to Lee),” an industry official said.

After the luncheon, Lee is expected to pay a visit to China and Europe to transform the IT giant into “New Samsung.” Amid tensions between Washington and Beijing, Lee might visit China and encourage staff and executives there. The Netherlands is another potential destination Lee might visit to discuss next-generation chip technologies with ASML, a major chip equipment maker located there.

Cheong Wa Dae’s invitation to Lee and the meeting set to discuss economic issues, however, seems to be inappropriate, some critics said.

Some even argued that it’s ironic for the government to ban Lee from having a job at Samsung and asking him to create jobs at the same time.