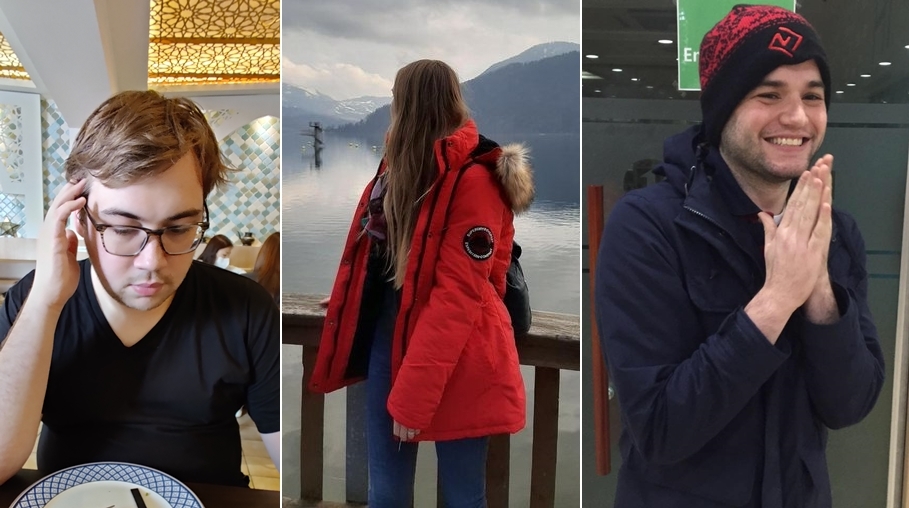 James Jensen (left), Alissa (middle) and Andrew are among many foreign residents who are considered ”unvaccinated“ despite having been vaccinated abroad.
From Monday, restaurants, cafes, cinemas and other public places in Korea will ask for proof of vaccination or a negative test for entry, as South Korea brings back stricter social distancing rules in the face of growing daily cases and the new omicron variant.

This means foreign nationals vaccinated overseas are highly likely to be denied access to such venues.

Currently, the country’s vaccination verification system, the Health Ministry-run mobile app COOV, does not recognize foreigners who have been fully vaccinated overseas and entered Korea without a quarantine exemption. South Koreans in a similar situation, however, easily get the exemption and are able to use the COOV app.

There is no data available on the number of foreign residents who are considered “unvaccinated” here despite having been fully inoculated overseas. The Korea Herald talked to four among them.


Software engineer James Jensen, 27, who was fully vaccinated with the Pfizer vaccine in the US, is not sure whether he can get a booster shot in Korea.

“My bigger concern is that it’s now been over six months since my second shot and I’m coming up on time for a booster shot, but I‘m not sure that I can be given a booster shot here, since Korea doesn’t think I‘m vaccinated.

”It’s hard to find clear guidance on what I should do, but I‘ve read references to the booster being a different dosage than the first or second doses -- so I’m hesitant to try and get another first dose instead.“

Though he has so far not had many experiences being denied entry at venues, he fears things will only get worse.

”I was only once denied entry to a bar back when groups of more than two had to be majority vaccinated, because I was in a group of three where one other had only just gotten their second dose. As this gets more organized I assume I‘ll be denied more places.“

With more cases of the omicron variant found in the country, the government is taking caution and will “later consider” recognizing more foreign vaccination certificates such as those carried by foreign nationals, according to an official of the Korea Disease Control and Prevention Agency on Sunday.


The rationale behind the delay makes little sense to Alissa, a 26-year-old graduate student, who received double doses of Pfizer in Switzerland.

“What I would wish from the government is that they stop arguing that it’s difficult to verify our certificates because I have Korean friends that got vaccinated in Switzerland, Germany and France. They have the same documents that I do, but for them, it‘s fine.”

The decision to count many foreign residents as “unvaccinated” also runs counter to the government’s efforts to increase vaccination rates, she said.

“I just wish that the government could give us a date they would stick to. But they keep saying they have no plan, which doesn’t make any sense to me because they’ve had two months to make a plan and they still don‘t have it. For me, it just means they don’t care.”

“Does the government realize that this will also affect more people going forward like new EPIK (English) teachers, international students and business people who are getting their boosters in their home countries now and who will come to Korea in January and February?”

To some foreign nationals here who were vaccinated overseas, the nation’s tightened grip on people’s access to high-risk public places doesn’t seem like a big change because they have never been part of the system from the start.


Ben, a German office worker in his 40s residing in Seoul who was temporarily dispatched to a Korean subsidiary of a Munich-based financial firm in Yeouido in June last year, couldn’t get back to work shortly after returning from his two-week trip to Germany in August because of the mandatory 10-day quarantine upon his arrival in Korea.

He failed to receive a quarantine exemption certificate from Korean health authorities before coming to Korea from his country. Despite having received the second dose of the Pfizer COVID-19 vaccine in his country, his vaccination history was not recognized by Korean health authorities without the documentation. He got the first shot in Korea in May.

“Missing my family back home, I flied to Germany and completed the COVID-19 vaccination there. At that time, I didn’t even have a clue of the price I had to pay in Korea for a visit to my country -- the self-isolation, being excluded from important business meetings. I missed a number of Zoom meetings with my company’s business partners overseas, so other officials should have adjusted their schedules to cover for me.”

“I do not understand why such an exemption certificate is mandatory to accept a vaccination status. Why does the Korean government link these two issues that have no correlation? To get this certificate as a normal worker from a foreign country is nearly impossible,“ he added.


Andrew, a 32-year-old American who teaches English at an international school for elementary, middle and high school students in southern Seoul, also returned to work 10 days later than expected after arriving here in August from a three-month stay in Atlanta to spend his summer break with family and attend his best friend‘s wedding. He got both shots of the Pfizer COVID-19 vaccine there, but has been unable to register his vaccine status here.

“Stuck at home due to the self-quarantine, I couldn‘t hold an orientation session before classes begin in early September. Before returning to Korea, I called the Korean Embassy in Atlanta and explained that I was fully vaccinated, but officials told me that I would not be eligible for the quarantine exemption certificate unless I had immediate family to visit in Korea.

“I would not say it was difficult for me to comply with the conditions for quarantine exemption -- it was literally impossible. This is further stifling as I really wanted to visit my family this holiday season as my grandmother is in poor health,” he said.

“I‘ve lived in Korea for a little over six years now with a working visa. This is home to me. This discrimination against foreigners in terms of the quarantine exemption as well as vaccination verification irritates me as I have been extremely careful and followed the government’s social distancing rules very closely.”