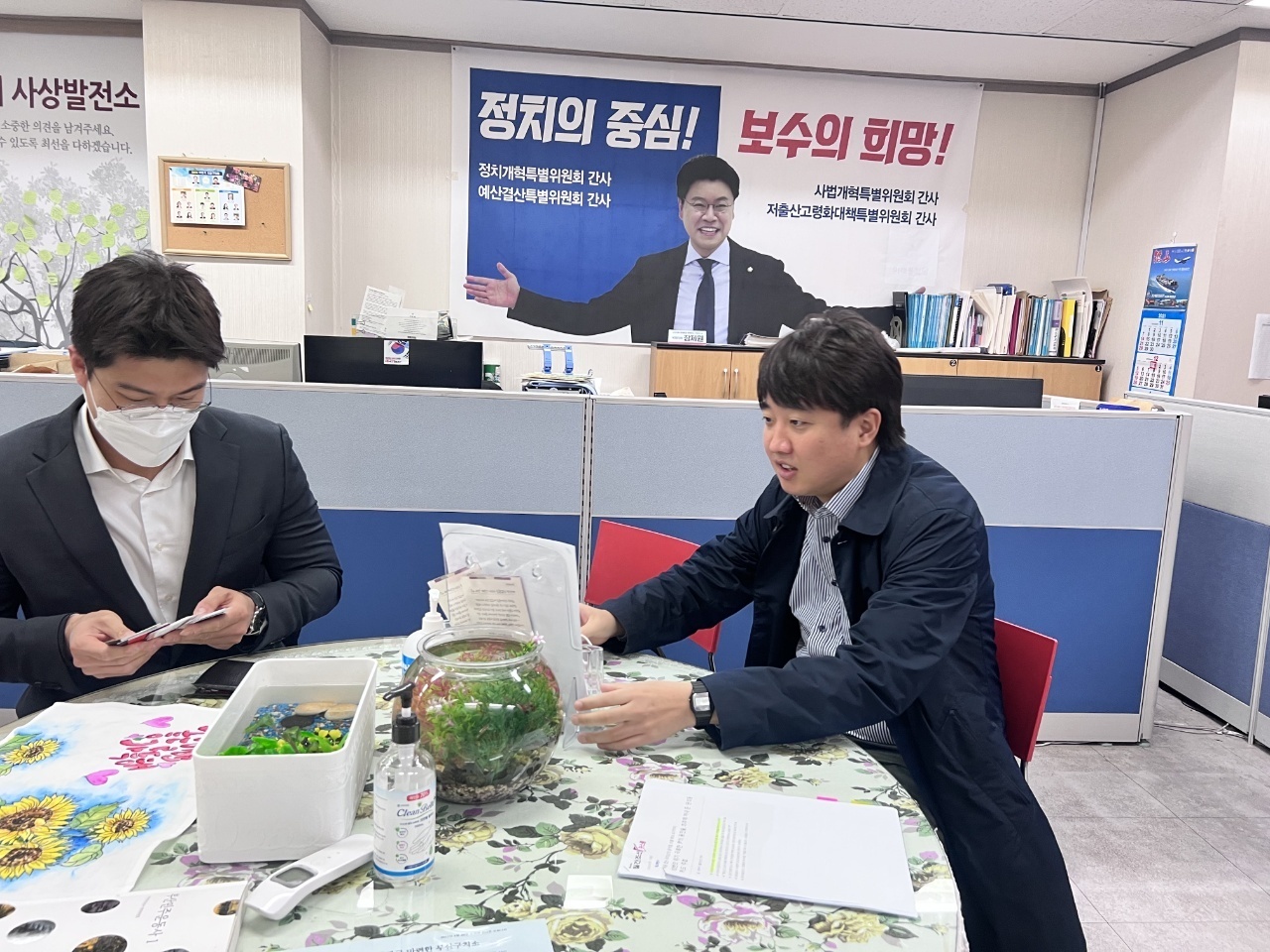 The photo, provided by the aides of People Power Party Chairman Lee Jun-seok, shows Lee at a party branch office in Busan. (Yonhap)
Chaos is growing in the main opposition People Power Party with conflict between its chairman and the election campaign committee appearing to deepen.

People Power Party Chairman Lee Jun-seok reportedly left for Busan with his aides Tuesday and held meetings with officials there without any prior notice. He is believed to be avoiding the press for the time being and continuing his schedule without public notice.

Lee's scheduled meeting with Rep. Kweon Seong-dong, the party’s secretary-general, failed to occur Tuesday. Lee’s whereabouts were not available at the time, after a set of unusual moves hours earlier.

The party chairman on Monday uploaded a Facebook post saying "If that is the case, this is it," with another post showing a text emoji of a smiling face and a thumbs-down gesture. His phone has been turned off since, and he could not be reached as of Wednesday.

The social media posts have sparked concerns that Lee could resign from at least one of his official posts after seemingly being left out of decision-making in People Power Party’s election campaign committee.

Lee's push to recruit veteran election campaigner Kim Chong-in as head of the election campaign committee fell into disarray, with presidential nominee Yoon Suk-yeol opposing the move and instead appointing Kim Byong-joon as the co-standing chairman to work alongside Lee, who has expressed concerns on the appointment.

Yoon told the press Wednesday that he will not overly look to get in contact with Lee, as he believes time is needed for Lee to "organize his thoughts before returning to work." He said he is not so concerned, as "disagreements can always occur in democratically-run party striving for democracy."

"Finding compromises and moving forward are what categorizes a democratically run political party," he said while visiting the Independence Hall of Korea in Cheonan, South Chungcheong Province, as part of his campaign efforts.

"If there is a unified command and order system in place, that wouldn’t really be a part of a democratically run political party."

Yoon said he is not in a rush to meet Lee in person as he still has activities scheduled for his presidential campaign and as he is unsure if Lee wants to take more time before returning to work.

"There are a lot of opportunities before, during and after meetings ahead as we have to run the election campaign committee and engage in senior party official meetings moving forward," he added.

Kim, heading the election campaign committee for the main opposition party, hinted in a radio interview Wednesday that Lee was not intentionally "passed" in the campaign, as "schedules are hectic" during the election. The expression "passing" is used in Korean to describe avoiding working with someone who would normally be consulted or involved in something.

He said he also became aware of Yoon's planned visit to South Chungcheong Province after it was reported to the press. Kim added Lee should help the party minimize dissonance as the presidential nominee moves on with his own schedule and campaign events, emphasizing that there is "no time to stop."

The ongoing internal conflict has raised concerns from within and out of the party, with officials denouncing Yoon and his aides for sidelining the party chairman and harming the chances of winning the March 9 presidential election.

The ruling Democratic Party of Korea said Yoon's treatment of Lee and other actions showed he was neglecting the needs and concerns of younger people.

"Candidate Yoon Seok-youl was reportedly an hour late to his talk session with young people on the 29th, and even being 30 minutes late is a big mistake in today’s world," ruling party’s election campaign committee spokesperson Park Chan-dae said in a statement Tuesday.

"This again shows how he is treating the youth, as exemplified from his causing of cacophony by ‘passing’ Chairman Lee Jun-seok on multiple occasions."

Rep. Hong Joon-pyo of the People Power Party encouraged Lee to return to work on the election campaign committee as he "is surely capable of overcoming it by himself," adding Yoon and his aides are disrupting the order within the party by pushing Lee away from his line of work.