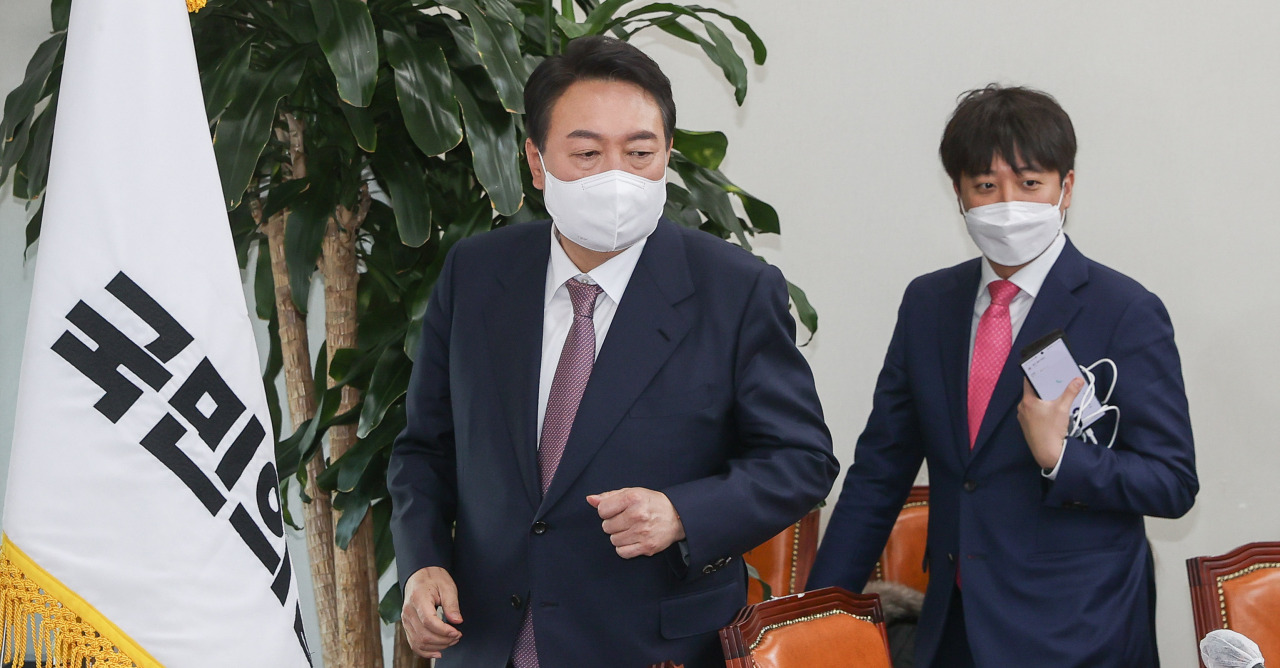 Main opposition People Power Party presidential nominee Yoon Seok-youl (left) and the party’s Chairman Lee Jun-seok attend the party’s supreme council meeting at the National Assembly on Thursday. (Yonhap)
The leadership of the presidential candidate of the main opposition party is being put to the test, as strife appears to deepen between the election committee and party chief.

On Tuesday, main opposition People Power Party Chairman Lee Jun-seok canceled all scheduled activities for the day without explanation, amid a growing gap between him and the party’s presidential nominee Yoon Seok-youl.

A day earlier, Lee uploaded a Facebook post, reading “If that is the case, this is it,” without elaborating. Soon after, he uploaded a separate post that in its entirety showed a text emoji of a smiling face with a thumbs-down gesture.

The unusual move has led to speculation Lee could be considering resigning from at least one of his official positions, which include co-standing chairman of the People Power Party election committee and party chairman, as he is seen being left out of Yoon’s decision-making.

Later on Tuesday, Yoon told reporters that he has asked the party’s secretary general Rep. Kweon Seong-dong to find out the reason for Lee’s actions and to talk to Lee in person. Yoon was visiting Cheongju, as part of his regional campaign rally in the Chungcheong provinces.

When asked on his thought over the controversy that he is sidelining the party chairman, Yoon said, “I do not know. I am just doing my best to do my role (as a presidential candidate).”

Since Yoon was chosen as the presidential candidate of the main conservative party early in November, he has been at odds with Lee over the formation of his election committee.

The conservative party sought to bring in veteran election campaigner Kim Chong-in, who is often referred to as a “kingmaker.” But Kim opposed Yoon’s recruitment of former interim party leader Kim Byong-joon to his campaign team. Yoon chose not to give in and instead appointed Kim Byong-joon as the co-standing chairman for the election committee, along with incumbent party chief Lee.

Lee has expressed his discontent and also raised concerns as to whether Kim Byong-joon will be able to lead the election committee to victory in the March presidential election.

“Kim Byong-joon does not have the experience of winning in a (political) battle, and I am worried about that part,” Lee said in a radio interview Monday.

“In an election, there should be a commander leading in every sector. Kim Chong-in should take charge to deal with either the exterior campaigning or inside.”

Describing Kim Chong-in as “cattle you cannot buy even with money,” Lee added they would have to pay more than the price of the cattle now to recruit him.

Lee was also seen being sidelined as Yoon kicked off his campaign rally to visit the South and North Chungcheong provinces with Kim Byong-joon. Lee was reportedly not informed of the trip.

Yoon’s announcement on Monday to recruit Lee Soo-jung, a professor of criminal psychology at Kyonggi University, has also upset the party chairman.

Lee Jun-seok had openly opposed the recruitment of Lee Soo-jung, saying she is a figure “countering” the party’s direction.

The 36-year-old party leader has reportedly said recruitment of the professor would affect the votes of men in their 20s and 30s, who view her as a feminist.

In a radio interview Tuesday, Kim Byong-joon said Lee’s Facebook post hinting at his resignation is a “powerful message,” and the revelation of the internal dispute is “embarrassing."

Five-term lawmaker Hong Joon-pyo of the People Power Party, who ran in the party primary, raised his voice Tuesday, saying leaving out the chairman in the election period would only ruin their election chances.

“A party chairman should be a top commander to lead the election committee, but strangers have butted in to create a mess in the committee,” Hong said on an online platform he launched to speak with young voters.

“Casting out the party chairman will only ruin the presidential election.”