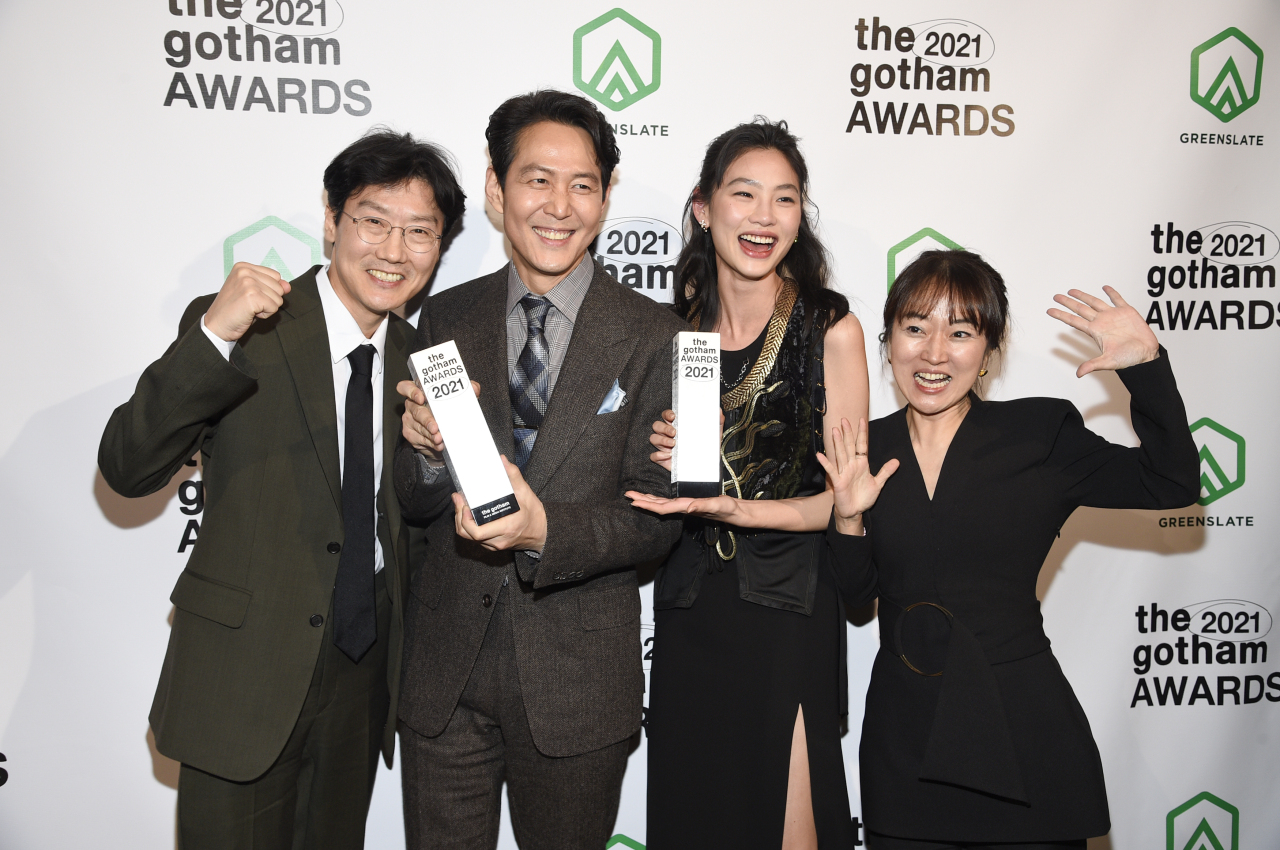 “Squid Game” was announced the winner of the breakthrough series’ long format category at the 2021 Gotham Awards on Tuesday.

Five other TV series, including Amazon Studios’ “Small Axe” and HBO Max’s “It’s A Sin,” vied for the prize in the over 40-minute category at the annual US awards ceremony for lower-budget indie movies and TV series.

The award ceremony took place on Tuesday in New York and “Squid Game” director Hwang Dong-hyuk, Siren Pictures CEO Kim Ji-yeon and two cast members -- Lee Jung-jae and Jung Ho-yeon -- were on stage when the award was given out.

“We’ve experienced so many miracles since we launched this show on Sept. 17 and the biggest of them is how much love and support you all have shown to a foreign language series with a very strange title,” Kim said during her acceptance speech.

Hwang, who wrote the script in 2009, said he had tried his best at the time but no one appreciated it.

“People said it’s unrealistic, it’s too violent, it’s absurd, it’s weird. It took 12 years to make this show and show it to the people. And it took less than 12 days to become the number one show on the planet,” Hwang said. “What can I say? It’s a miracle. If there are miracles, this is a miracle. it happened to me. And all I can say is thank you. Thank you for watching it.”

The series revolves around a contest where 456 players, who are in deep financial debt, risk their lives to play a series of Korean children’s games to win a 45.6 billion won ($38.5 million) prize. It became the most successful TV show in Netflix history with more than 142 million viewers in the first four weeks after its release on Sept. 17.

Its lead actor Lee Jung-jae was also one of 10 nominees for the outstanding performance in a new series prize at the 2021 Gotham Awards, but failed to win. The category had two winners -- Ethan Hawke in “The Good Lord Bird” and Thuso Mbedu in “The Underground Railroad.”

Organized by the Independent Filmmaker Project, the Gotham Awards is one of the major film awards in the US in the runup to the Oscars slated for March next year. Films budgeted under $35 million are eligible for nomination.

Last year, South Korean actor Youn Yuh-jung was nominated for best actress for her performance in ”Minari,” but failed to win.