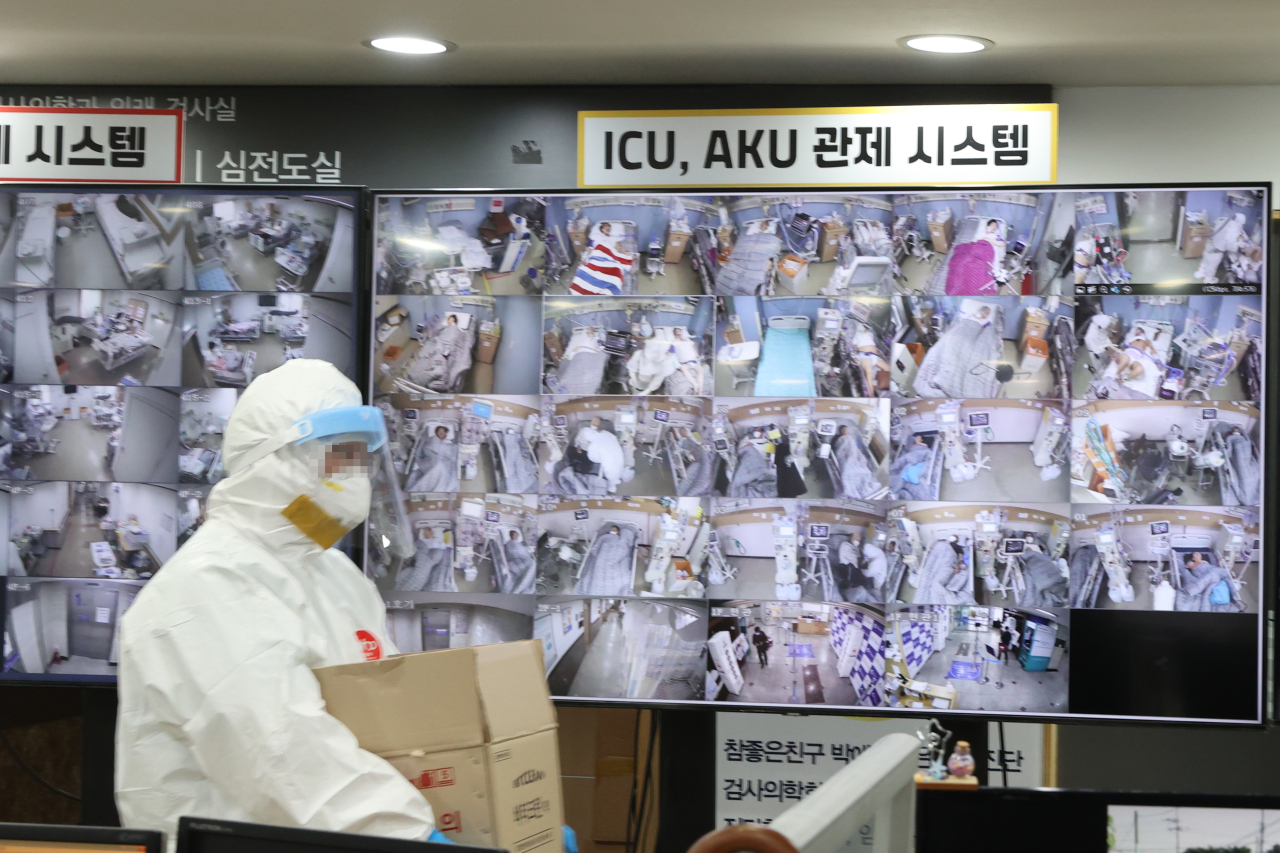 A patient transfer official passes in front of the video of the hospital room control system in the situation room of Bagae Hospital in Pyeongtaek, a hospital dedicated to COVID-19 on Tuesday. (Yonhap)
With Korea’s daily tally rising above 4,000 for the first time since the pandemic began last year, the prime minister said the wider Seoul area might return to stricter restrictions if cases continue to surge.

As of Tuesday midnight, the number of new daily cases marked 4,116, with 4,088 locally transmitted. The number of severely ill patients increased by 37 from the previous day to 586, and the number of deaths was 35, the highest since the implementation of phased daily recovery.

Prime Minister Kim Boo-kyum said Wednesday it was urgent to “consider initiating an emergency plan for the wider Seoul area at any time,” meaning a return to stricter restrictions and expanded use of the vaccine pass system.

“It has entered its fourth week since the step-by-step recovery of daily life began. It’s time to think about whether to move on to the next step, but the quarantine situation is more serious than expected,” Kim said.

The Korea Disease Control and Prevention Agency’s risk assessment showed that the nation’s COVID-19 risk is “high” and the Seoul metropolitan area is “very high,” he said.

He also said the activation of “home treatment” is an immediate task in the greater Seoul area.

“Home care is a major axis of medical response to support phased daily recovery, but it has not yet been properly established,” he said.

Last week, the proportion of patients treated at home was below 20 percent, which was rather reduced compared to the previous week, Kim said.

“If everyone occupies beds even though their symptoms are mild or asymptomatic, patients who need intensive care will not be able to come to the hospital and will be life-threatening,” he said.

According to the authorities, 778 confirmed patients are waiting at home without being assigned beds as of Tuesday. The number of confirmed patients waiting for more than four days was 136, an increase of 14 from the previous day.

The Prime Minister also urged the public to participate in additional vaccinations actively.

“Among the confirmed patients in their 60s or older in the last two weeks, the proportion of those who have completed vaccination has exceeded 80 percent. It proves that the vaccination effect has dropped sharply,” he said.

“This is why we need to speed up the ongoing additional vaccination,” Kim said, adding it should be understood as an extension of “basic” vaccination, not “additional.”

The prime minister also urged teenagers and adolescents to get shots, saying their vaccination rate was still low.

“We sincerely ask parents to actively vaccinate their children so that they can concentrate on school life with confidence without worrying about COVID-19.”

The number of confirmed children and adolescents reached 16 percent of new patients on Monday. But the completion rate of vaccination between the ages of 12 and 17 is only 15.4 percent.

The government is considering whether to apply a “vaccine pass” to teenagers. When introduced, they must submit a certificate of completion of vaccination or a negative PCR test when using facilities vulnerable to infection. It is likely to be introduced for nonessential multi-use facilities such as karaoke rooms and PC rooms.

As of Tuesday midnight, the cumulative number of people in Korea who had received at least one shot for COVID-19 was 42.32 million, or 82.4 percent of the total population. The total number of people who had completed the second round of vaccinations increased to 40.63 million, or 79.1 percent.