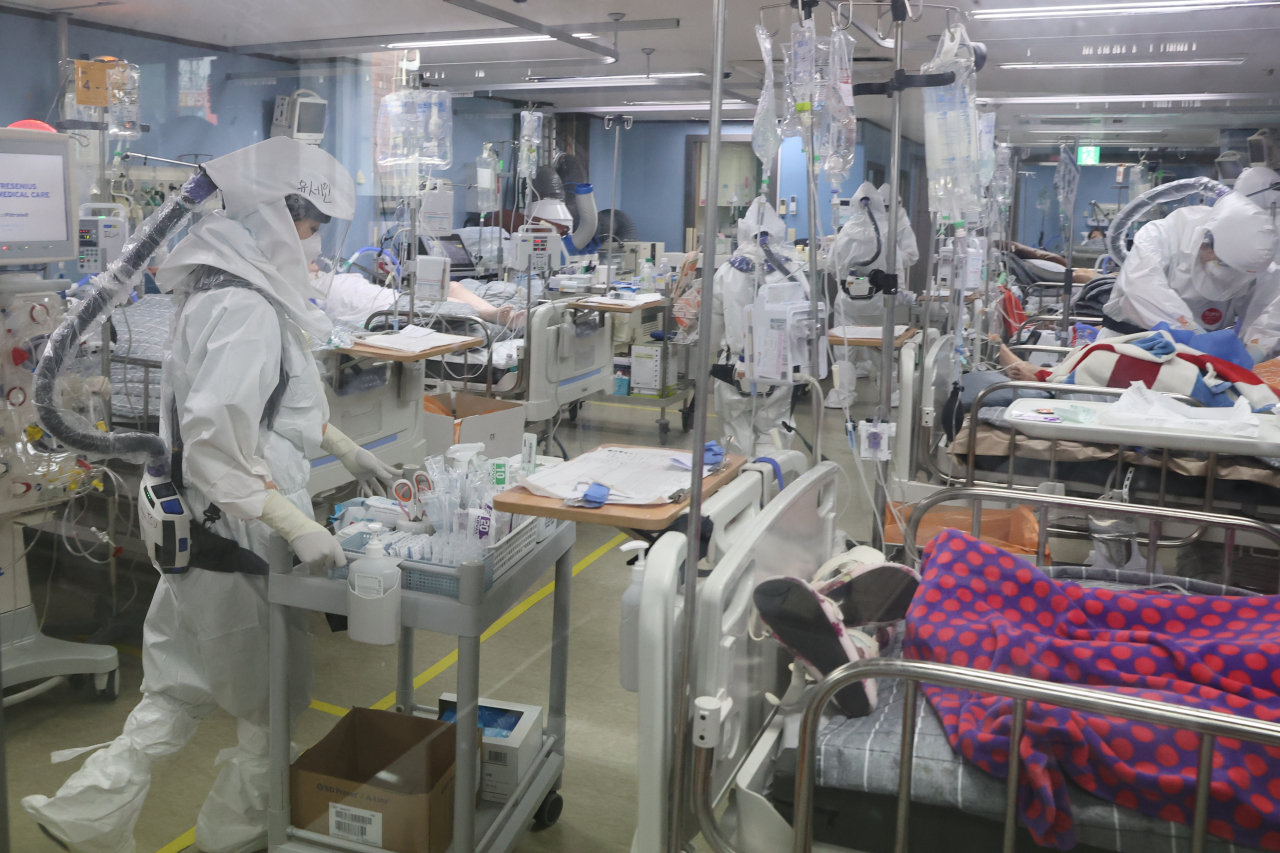 Medical workers in full protective gear care for COVID-19 patients at an intensive care unit of a COVID-only hospital in Pyeongtaek, 70 kilometers south of Seoul, on Tuesday. The operating ratio of beds for critical patients in the metropolitan areas had reached 83.3 percent as of 5 p.m. the previous day, an all-time high. (Yonhap)
South Korea's new coronavirus cases and critical cases soared to all-time highs Wednesday, prompting the government to consider imposing an emergency COVID-19 response plan just weeks after easing social distancing rules under the "living with COVID-19" scheme.

Prime Minister Kim Boo-kyum urged health authorities to beef up containment measures, saying the country is facing the first hurdle in its move back toward normalcy and the Seoul metropolitan area, home to half of the country's 52 million population, is in an urgent situation.

The country reported 4,116 new COVID-19 cases, including 4,088 local infections, raising the total caseload to 425,065, according to the Korea Disease Control and Prevention Agency (KDCA).

This marked the highest since the country reported its first confirmed coronavirus case in January last year. It also broke the previous daily record of 3,292 reported last Thursday.

The number of critically ill patients hit an all-time high of 586. The country added 35 more deaths from COVID-19, the highest number since the start of the fourth wave of the pandemic in July, bringing the death toll to 3,363, with the fatality rate standing at 0.79 percent.

Daily infections soared as the government began easing antivirus restrictions on Nov. 1 for a gradual return to pre-pandemic life under the three-phase "living with COVID-19" scheme.

The government is struggling to secure enough hospital beds, especially in the greater Seoul area, as infections remain high and the number of critically ill patients is on the rise.

"We should beef up support measures so that asymptomatic patients and those with mild symptoms can have treatments at home safely," Kim said.Health authorities said 83.3 percent of beds for patients in serious condition in Seoul and its surrounding area had been occupied as of 5 p.m. Tuesday.

Of the locally transmitted cases, Seoul, the surrounding Gyeonggi Province and the western port city of Incheon reported 1,730, 1,176 and 219 infections, respectively. Their combined number accounted for over 70 percent of the local infections.