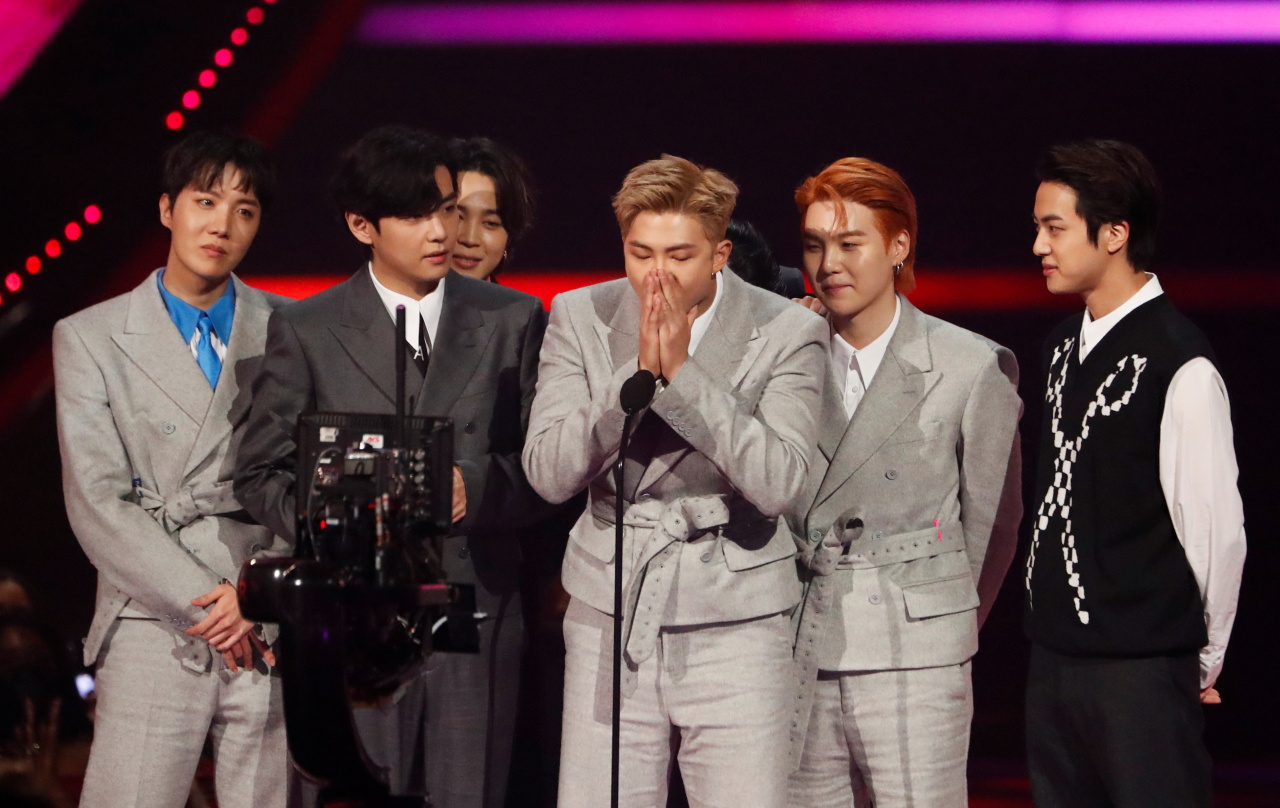 During the 2021 AMA ceremony on Sunday (US time) at the Microsoft Theater in Los Angeles, the K-pop superstars picked up prizes in three categories -- Artist of the Year, Favorite Pop Duo or Group and Favorite Pop Song, for their hit “Butter.”

BTS is the first Asian act in history to be nominated and win Artist of the Year at the AMAs. The other nominees for the top honor were Ariana Grande, Drake, Olivia Rodrigo, Taylor Swift and The Weeknd.

“Four years ago, we gave our first TV live performance at this stage, AMAs. It was ‘DNA.’ And we were too excited and nervous at that time. It’s been a long and amazing ride since then, but nobody could have ever bet on the odds of us standing here receiving this award,” RM said in English while accepting the award.

Jungkook added, in English, “We just wanted to make people happy with our music. We believe that this award opens the beginning of our new chapter.”

Speaking in Korean, Suga expressed gratitude to their global fandom, Army, saying, “We’d never imagined we’d win the artist of the year. It’s all thanks to you guys, Armys. Thank you!”

BTS also clinched the Favorite Pop Duo or Group -- the category’s name was changed from Favorite Duo or Group in Pop/Rock this year -- award for the third straight year. They were up against AJR, Glass Animals, Maroon 5 and Silk Sonic (R&B duo composed of Bruno Mars, Anderson .Paak).

The K-pop act went onto lift their first win for Favorite Pop Song with their hit summer release “Butter,” beating out some of the year’s biggest hits, including Olivia Rodrigo’s “drivers license” and Dua Lipa’s “Levitating.”

“‘Butter’ is a special song to us. We hope it makes you feel ‘smooth like butter,’” Jungkook said while accepting the award, referring to the song’s signature lyric, while RM said, “‘Butter’ has received so much love this year. All we wanted to do was to put out the positive energy despite of the hard times. This award truly proves that this song reaches many people’s heart.” 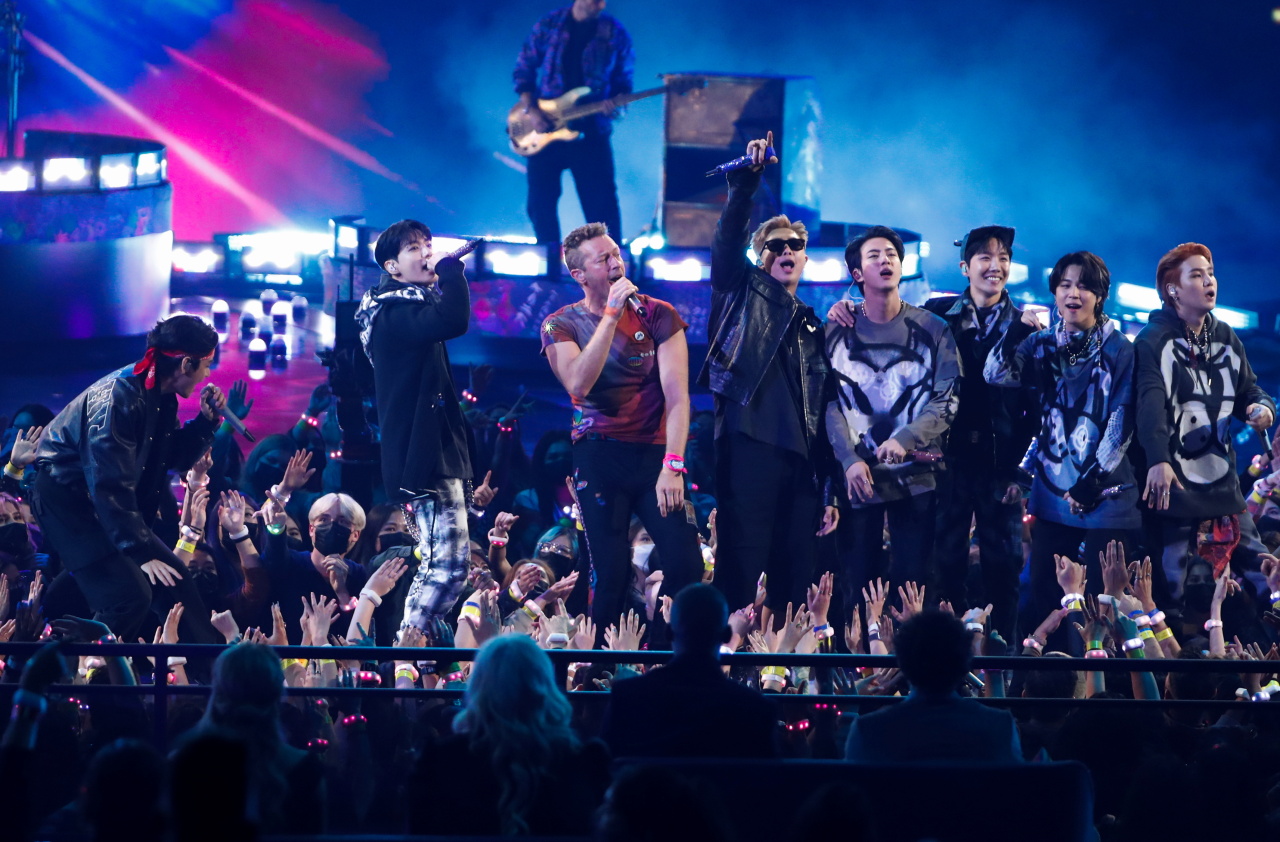 Coldplay and BTS perform during the Annual American Music Awards at the Microsoft Theatre in Los Angeles, California, on Sunday. (Reuters/Yonhap)
The group took the stage twice, once on their own and once with Coldplay to perform their collaborative single “My Universe” together for the first time.
The boy band closed the night with their live performance of “Butter.” They were originally set to perform a remix of the song with rapper Megan Thee Stallion, but she pulled out at the last minute on Saturday due to “unexpected personal matters.”

The septet’s presence at the award show electrified the event, as chants of “BTS” from frenzied fans could be heard sporadically in the background throughout the show. Not only fans, but other artists were also hyped up to see the group take the stage, singing and dancing along as BTS performed.

Rappers Doja Cat and Megan Thee Stallion were the other top winners at the 2021 AMAs, each taking home three trophies. The awards’ biggest winner in history, Taylor Swift, broke her own record by taking home her seventh Favorite Female Pop Artist and Best Pop Album with “evermore,” bringing her total to 34 AMA trophies. Olivia Rodrigo, the 18-year-old breakout singer-songwriter who entered the awards as the top nominee with seven nods, was named this year’s New Artist of the Year.

This year marks the fourth consecutive year that BTS is taking home trophies from the AMAs. They earned their first win in 2018, when the group was named the Favorite Social Artist as the first Korean act ever to be nominated and to win at the American awards show. The group went on to secure Favorite Social Artist prize three times in a row until last year, and also grabbed the Tour of the Year prize in 2019 for “BTS World Tour Love Yourself: Speak Yourself.” 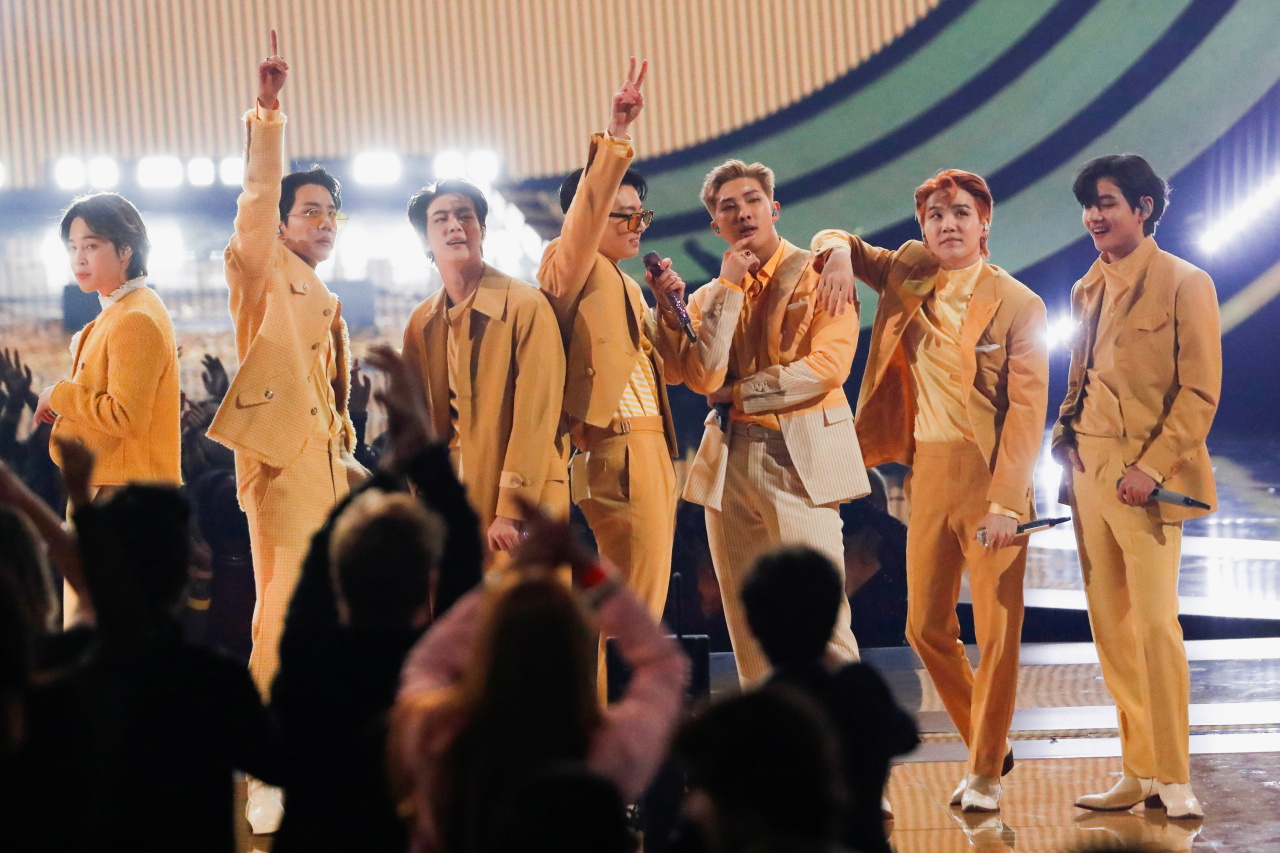 BTS performs during the 49th Annual American Music Awards at the Microsoft Theatre in Los Angeles, California, on Sunday. (Reuters/Yonhap)
“It took four years to be on this stage to get this trophy,” RM said during his acceptance speech for the Favorite Pop Duo or Group award, adding, “it means to us even more because we’re a small boy band from Korea. We just got united by our love for our music and all we wanna do is spread love and good vibes and energy through music and performance. But without you guys, ARMYs, we could not have done nothing. Thank you so much.“

Meanwhile, BTS is set to kick off their “Permission to Dance On Stage” concert series on Nov. 28 at SoFi Stadium in Los Angeles, as their first set of in-person concerts in two years, before taking the stage at the 2021iHeartRadio Jingle Ball tour around the US.