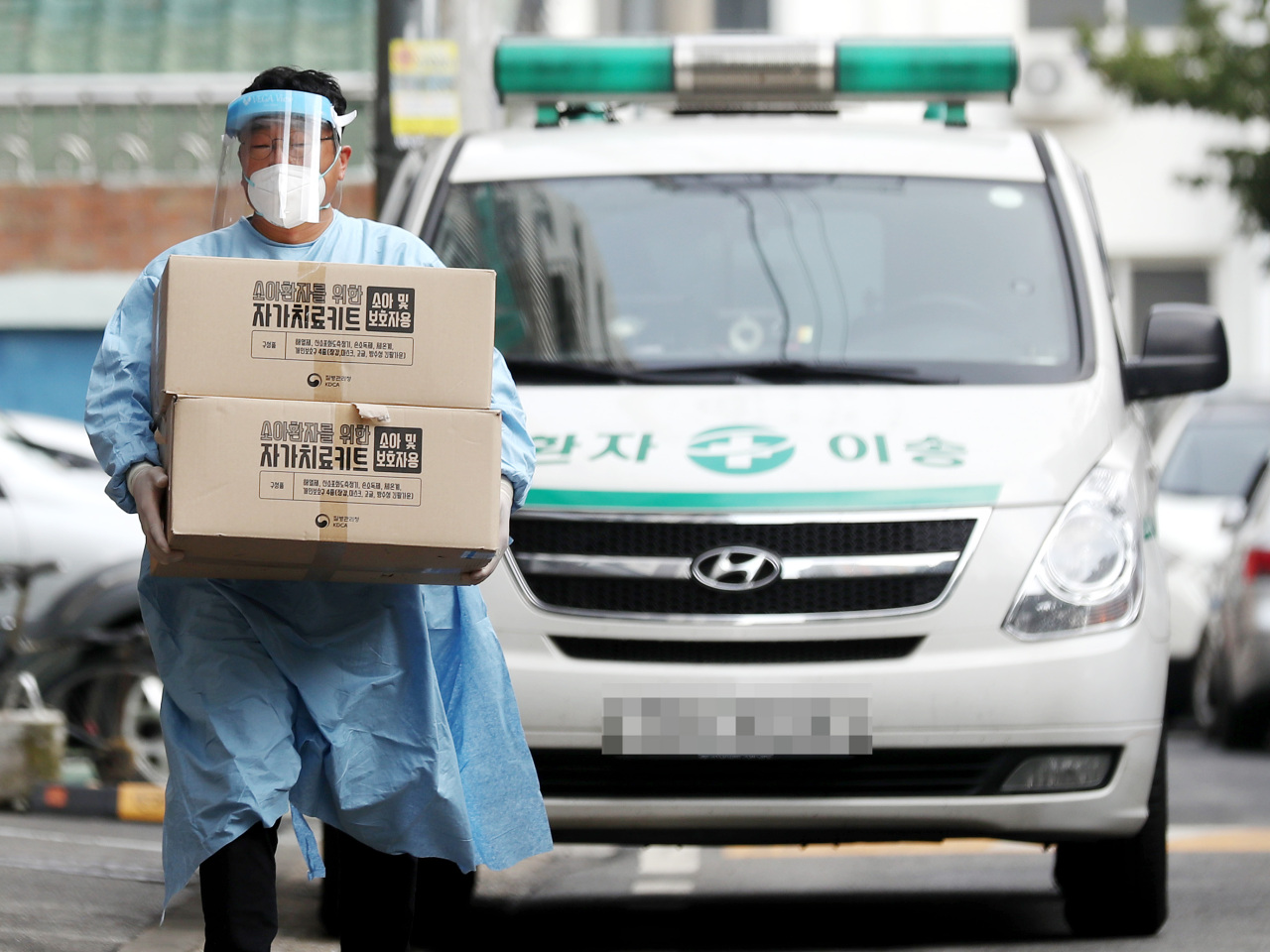 A health worker carries "self-treatment kits" for the coronavirus in Incheon, 40 kilometers west of Seoul, on Tuesday. They will be used by people infected with the coronavirus who have no symptoms or mild ones and are taking care of themselves at home. (Yonhap)

South Korea saw its new coronavirus cases rise by nearly 500 cases Wednesday, but the caseload stayed below 2,000 for the 12th straight day, as the country continued its vaccine campaign aimed at returning to normalcy.

The fourth wave of the pandemic peaked in late September with more than 3,200 daily cases reported, but since then, infections have shown a downward trend. New daily cases have been under 2,000 for 12 consecutive days, largely thanks to rising vaccination rates.

As of Wednesday, 66.7 percent of the 52 million population were fully vaccinated, while 78.9 percent had received their first shot.

In early July, the full vaccination rate stood at about 10.6 percent.

Over 70 percent of South Koreans are expected to be fully vaccinated by the end of this month, which the government believes is a precondition for the resumption of pre-pandemic life.

Jeong Eun-kyeong, head of the Korea Disease Control and Prevention Agency, said during a parliamentary audit session that she expected the country to reach the 70 percent vaccination rate at around Oct. 23-25.

Beginning this week, the restrictions on private gatherings have been lifted to allow up to eight people in Seoul and its surrounding areas to meet, provided that four of them are fully vaccinated. A maximum of 10 people, including six fully vaccinated, are allowed to gather in other regions.

The eased rules will be in effect until the end of this month in what the authorities said would be the last adjustment of social distancing as the country is due to introduce the "living with COVID-19" scheme.

Of the locally transmitted cases, Seoul reported 504 new cases, with the surrounding Gyeonggi Province adding 588 and Incheon, 40 kilometers west of Seoul, 109 cases. The areas took up 76.6 percent of the total.

The number of patients released from quarantine after making full recoveries stood at 316,607, up by 3,175 from the previous day, the KDCA said.

Meanwhile, the KDCA corrected the country's total virus caseload by one due to a duplication of the collected data. (Yonhap)