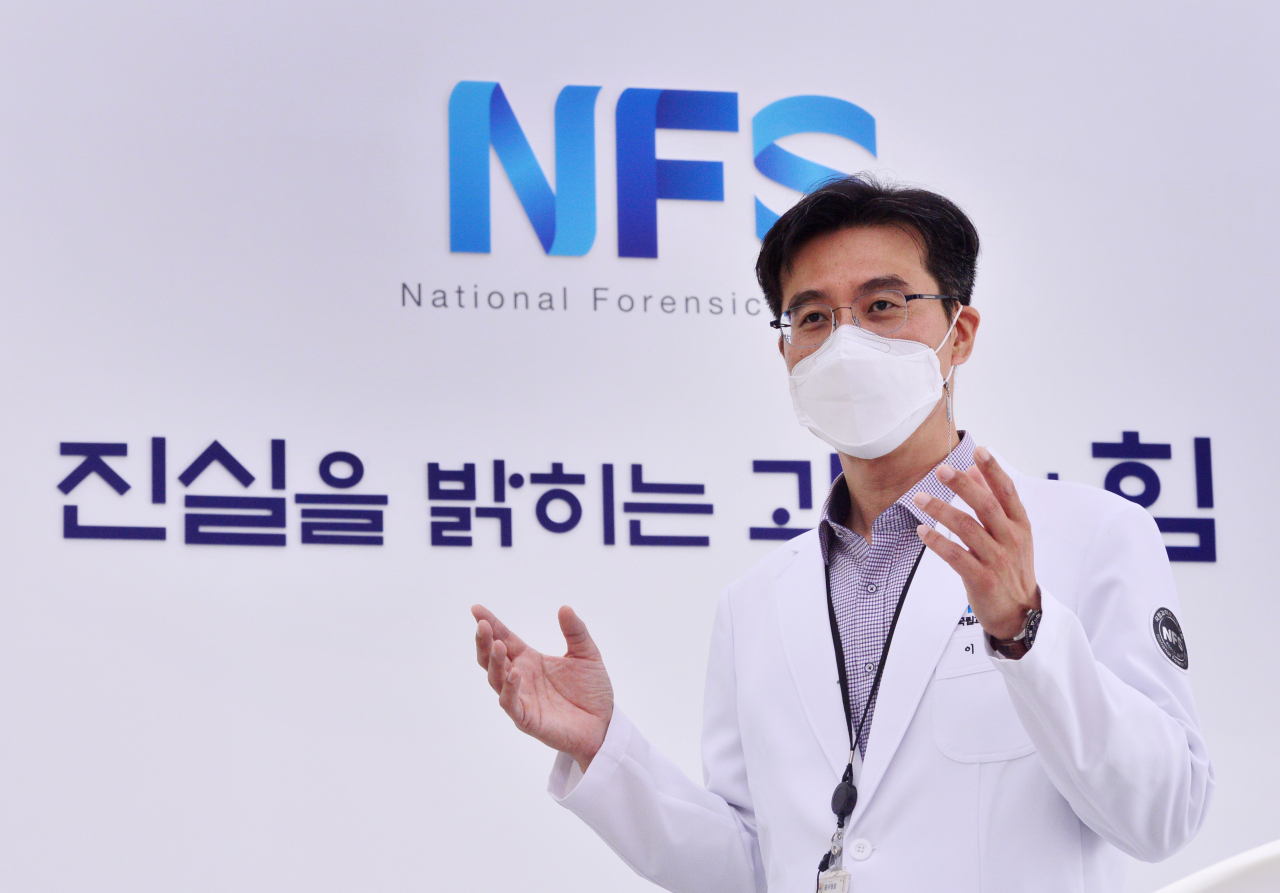 Dr. Lee Sookyoung, director of the National Forensic Service’s forensic medical examination division, poses during an interview with The Korea Herald at the government agency’s headquarters in Wonju, Gangwon Province. (Park Hyun-koo/The Korea Herald)
WONJU, Gangwon Province -- The challenge facing the current stage of the pandemic is to vaccinate as many people as possible against COVID-19. As the vaccination campaign reaches wider populations, deaths are bound to be reported. And postmortem examinations play a pivotal role in ascertaining the safety of the vaccinations by determining if the vaccine is truly to blame.

While the vaccine is extremely unlikely to harm people, every death deserves a thorough investigation, said Dr. Lee Sookyoung, a top forensic pathologist in the country, and that is what forensic medical examinations ultimately aim to achieve.

Lee, the director of the forensic medical examination division within the National Forensic Service, said now that nearly 80 percent of the Korean population had received at least a single dose of a COVID-19 vaccine, deaths that might not normally have stood out were getting noticed.

So many inquiries were pouring in from police stations all over the country that the forensic service was struggling to keep count of the “vaccine cases,” he said.

“But abrupt deaths do happen in healthy people in the absence of vaccination,” he said.

People who appeared healthy are the ones usually referred to the service for examination. “If they had obvious health problems when they were alive,” he said, “then they wouldn’t need to be here.”

So when is a death linked to a vaccine? Because the COVID-19 vaccines are new, the science surrounding them is continually evolving, he said.

At first, no one knew vaccination could be related to blood clots with low platelets, for example. And the task of staying up to date on related information was added to his day, about half of which is typically spent in the autopsy room with the rest writing reports and attending meetings.

“Cases involving a vaccinated individual require more work, in that sense,” he said.

With post-vaccination deaths, getting the clear-cut answer that people expect is not always possible, said Lee, who has also been a part of the government health protection agency’s vaccine injury investigation unit since February.

Myocarditis, inflammation of the heart muscle that is associated with the Pfizer and Moderna vaccines, was a regular screening in non-vaccine-related cases, too. The kind of biopsy that clinicians can conduct was very limited. Forensic pathologists, on the other hand, can look at the organ more extensively.

“An autopsy can find out for certain if myocarditis was present, and where, and see if there might have been other contributing factors, like underlying conditions that health screenings could not pick up.”

Asked if an autopsy could reveal whether a condition was caused by a vaccine, Lee said that at the moment, it could not. For one, there is not a marked difference between vaccine-induced myocarditis and a naturally occurring case. But as cases accumulate, better understanding is expected.

“Simply put, what autopsies do is look for injuries, diseases and other clues that a clinical chart alone may not be able to demonstrate,” he said. “Forensic medical examinations allow a final diagnosis to be given, with much varied and in-depth information gathered from gross morphological observations to microscopic evaluations to toxicology tests.”

Assessing a causal relationship between a death and a vaccine was done over a spectrum of causality from “definitely not related” to “possibly or probably related” to “definitely related,” he said, so interpretations mattered as well.

“Determining whether the death is attributed to the vaccine, to a certain degree, is about how the criteria will apply. It’s not a simple yes or no.” 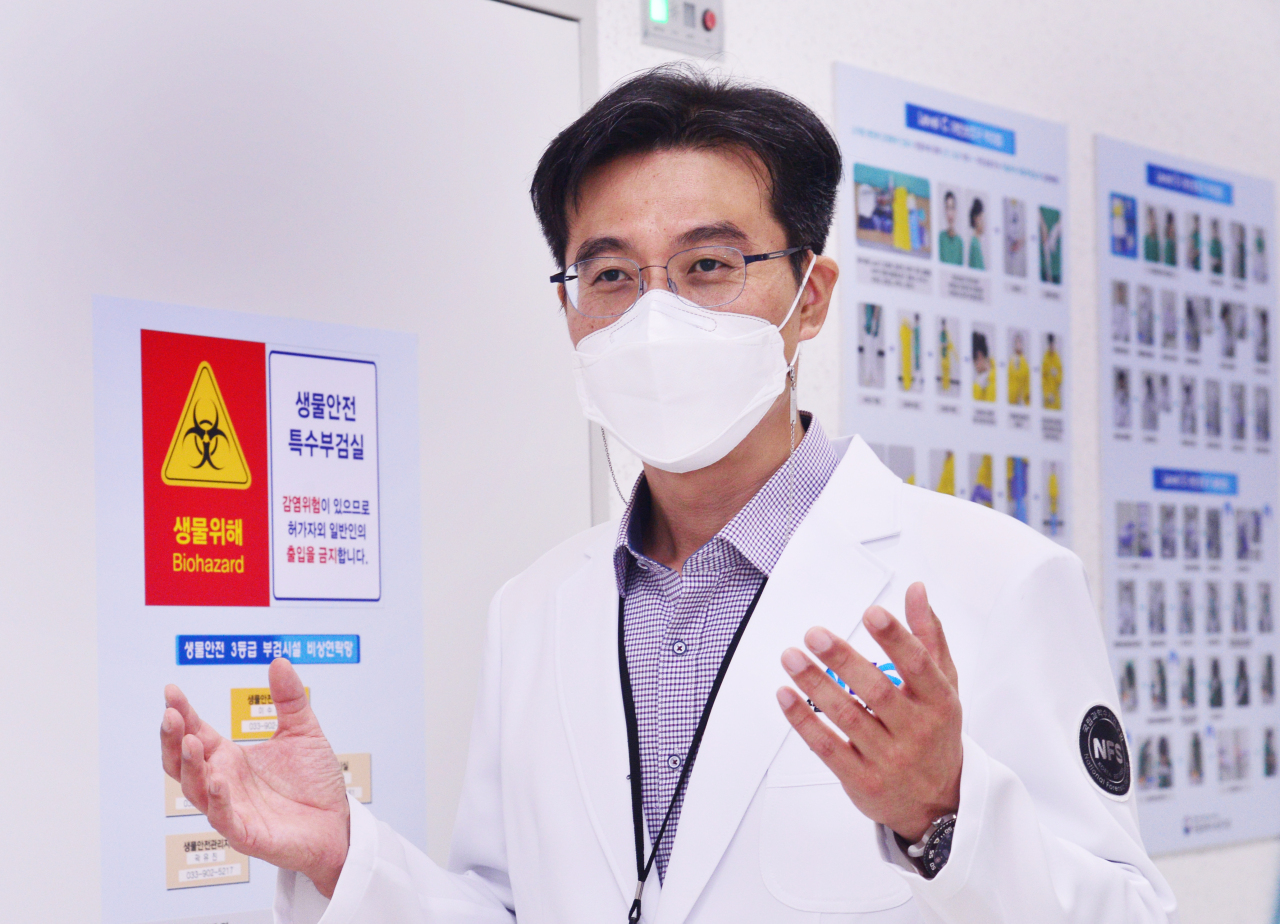 “After an autopsy had already been done, if investigations reveal later on that the dead person had been in close contact with an infectious patient, the whole team has to get tested,” he said. “These are the kind of things that have become a routine occasion.”

Since police carry out preliminary investigations of suspicious deaths, or deaths not from natural causes, the findings from their investigations, together with hospital records if there are any, are handed over to the forensic service. “And then we work from there,” he said.

Testing the dead for COVID-19 is also done with the highly accurate PCR tests, using samples taken from the nasal airways all the way to the lungs.

Korea’s custom of burying a person three days after death forces the examiners to work as expeditiously as possible. “Once the body gets here, it’s a matter of a day or two until everything is completed,” he said. Often, sections of organs and other samples that may hold important clues are kept for a microscopic evaluation.

The state forensic service headquarters in Wonju, Gangwon Province, is equipped with the only biocontainment laboratory in the country that meets the requirements for autopsies of patients with confirmed or suspected infection.

The biosafety level 3 lab, like most national infectious disease infrastructure, was built in the aftermath of the 2015 outbreak of another coronavirus disease, Middle East respiratory syndrome.

Fewer than a dozen autopsies have taken place in the special lab since COVID-19’s onset, Lee said, because “there haven’t been a whole lot of requests.”

“The few cases conducted last year at the biosafety lab were of passengers from overseas who died shortly after arrival -- all of them were found to be negative later on,” he said.

“So far just three were definitely positive,” he said. All three were done this year, to clarify the role COVID-19 played in their deaths.

Korea counts all deaths with a positive test -- pre- or postmortem -- as COVID-19 deaths, “probably out of statistical convenience,” he said. “But dying with COVID-19 is different from dying from it, and autopsies can help draw that distinction.”

In March last year in a small city near Daegu, Korea’s initial epicenter of the pandemic, a 17-year-old died after developing pneumonia. Medics who treated him said he had COVID-19, which would have made him the country’s only teen fatality. The government, concluding that the result was a false positive, said no autopsy was necessary. Incomprehensibly, though, his family was still denied a proper funeral “out of caution.”

The teenager’s high-profile death is an example of a case where an autopsy would have helped elucidate the questions and put the controversy to rest, Lee said.

In Korea, the forensic service has no authority to call for an autopsy -- the court grants that permission, usually at the request of the police. The Korea Disease Control and Prevention Agency’s commissioner can also request the examination, although to date no such request has ever been filed for a COVID-19 patient.

Lee cited the US system, where the medical examiner decides if an autopsy must be performed, as “ideal,” especially amid a complex web of challenges posed by the present pandemic that would not have been a problem in ordinary times.

“In investigations of deaths of COVID-19-vaccinated subjects, for instance, the public health agency can be considered a party of interest. For credibility, it’s better to put a third party in charge of making the related decisions and presenting the results to the public and so on,” he said.

Lee believes the reason that so few autopsies have taken place in Korea is twofold.

“One reason is people’s reluctance toward the idea of autopsies of their loved ones,” he said. “Another is the policy that mandates cremation for everyone who has had a positive test result for purposes of infection control.”

From the beginning of the pandemic, the Korean government has stated that people who have died with COVID-19 must be cremated -- burial is not an option -- despite the World Health Organization guidance that says cremation should be “a matter of choice.”

On a personal level, autopsies offer a “final chance at finding out the truth” in the face of an unexplained death, and “one way to bring closure to the questions that otherwise could not be answered,” he said. They can also provide crucial insights into the many mysteries of the new disease -- which then could lead to lifesaving discoveries, like a treatment.

“In a novel infectious disease emergency, forensic medical examinations can shed light on some key, unanswered questions,” he said.