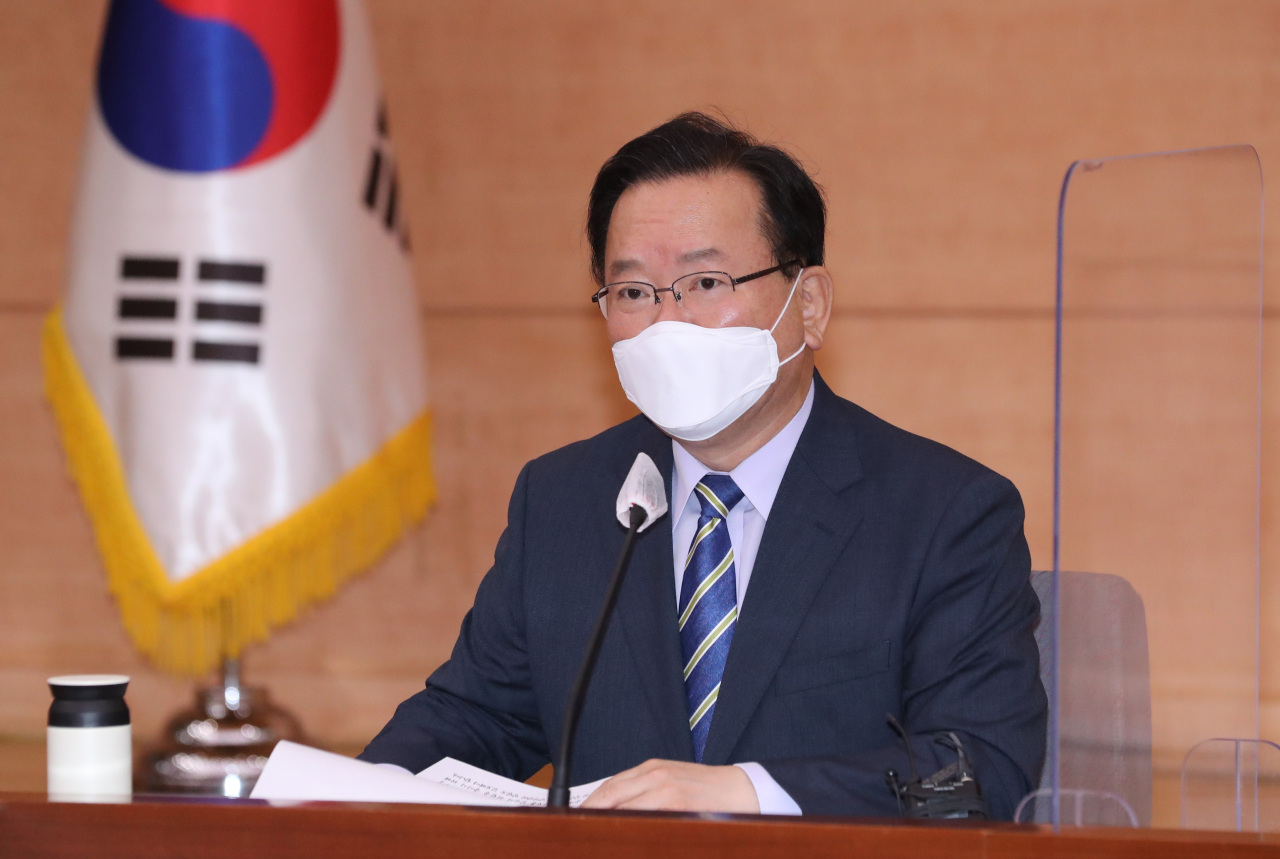 Prime Minister Kim Boo-kyum speaks Wednesday during the first meeting of the government-civilian committee launched to set up guidelines and hold discussions before beginning the normalization process in November. (Yonhap)
South Korea is positively considering a “vaccine pass” system to incentivize people to get vaccinated against COVID-19 as officials look to start the normalization process next month.

The system would entail providing benefits and exemptions to virus rules for those who have completed their COVID-19 vaccinations. The discussion has gained steam as officials believe such a system could boost the nationwide vaccination program and increase the likelihood of successful normalization.

“We will prepare to change COVID-19 from a mysteriously fearful virus to a controllable infectious disease and thereby give back normal lives to people,” Prime Minister Kim Boo-kyum said Wednesday during a meeting of a new committee on normalization after the COVID-19 pandemic.

“We also have to review new virus control measures like introducing a ‘vaccine pass’ while revamping the medical sector.”

Kim’s comments were made during the first meeting of the government-civilian committee, launched Wednesday to set up guidelines and hold discussions before beginning the normalization process in early November.

Eight government officials and 30 experts from the private sector convened for the first meeting to draw up a road map for normalization in various sectors.

The committee has four subcommittees. One is concerned with the economy, one with society and culture, one with administration and safety, and one with the medical and quarantine sectors.

The meeting ran from 9:10 a.m. to 10:50 a.m., and participants evaluated the progress of Korea’s COVID-19 response to date and drew up plans for future measures.

The committee also agreed to have its subcommittees establish plans on the continuation of vaccination efforts, the review of adverse effect response plans, revision of the current social distancing system, and reform of the medical and quarantine sectors.

The general plan set out so far is aimed at carrying out normalization on a gradual basis with ideas gained from countries such as Israel, Germany and Portugal, which have already launched normalization efforts based on high COVID-19 vaccination rates.

The committee aims to announce an official road map for normalization later this month. Even after starting the normalization process in November, the committee plans to hold at least one meeting every month and its subcommittees are to meet at least twice a month.

The authorities are hoping 70 percent of the population will have had second shots by Oct. 23 before the normalization process officially starts next month. Officials have emphasized that herd immunity is essential to the normalization plan.

While some oppose the introduction of a vaccine pass system out of concern about discrimination against unvaccinated people, polls have shown that the majority of the population is in favor of its introduction.

A Realmeter survey of 500 people aged 18 or above showed early this month that 64.4 percent of respondents were in favor of introducing vaccine passes, while 29 percent were opposed.

The country has been reporting new COVID-19 case numbers in the quadruple digits since July 7.

Korea reported 1,584 new cases by Tuesday’s end -- 1,571 locally transmitted and 13 imported from overseas -- raising the total number of cases to date to 335,742, according to the Korea Disease Control and Prevention Agency.

It was expected that the daily new case count would rise after the three-day weekend that ended Monday.