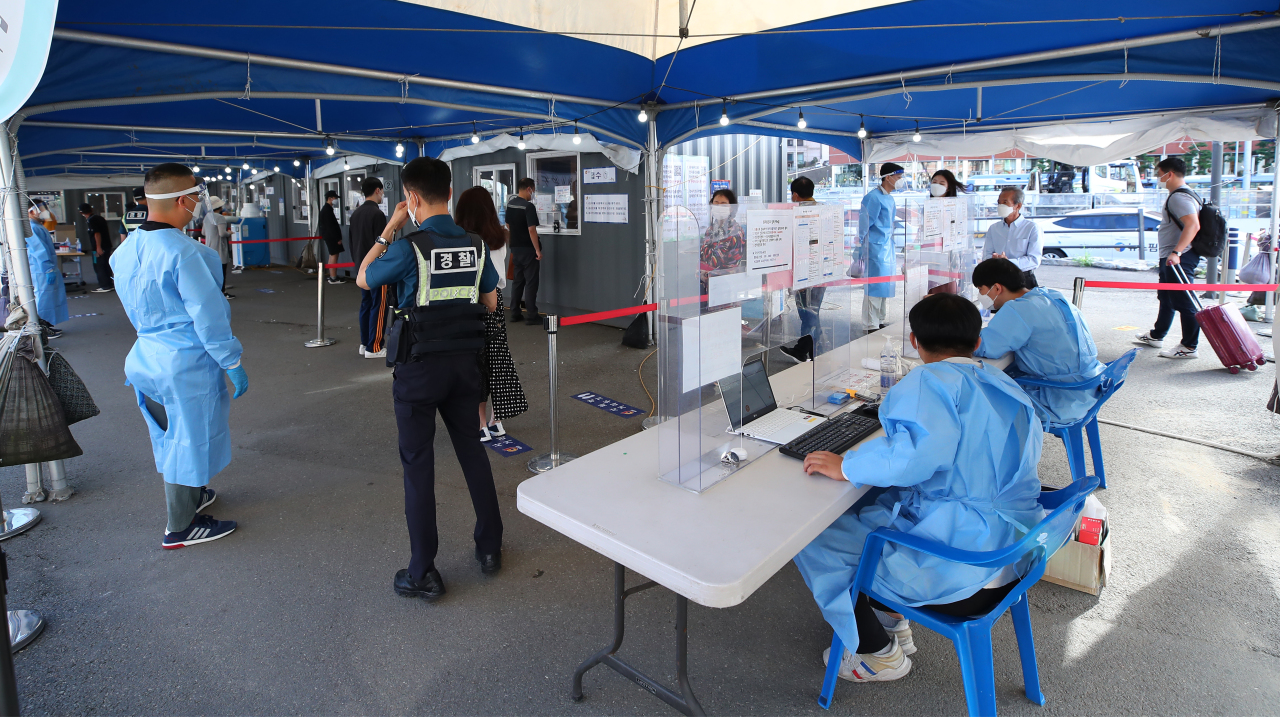 This photo taken Sunday morning shows people waiting at a testing clinic set up outside Seoul Station in the city`s central district. (Yonhap)

South Korea will begin to move past restrictive COVID-19 measures and return to normality in about a month’s time, Prime Minister Kim Boo-kyum said Sunday.

Speaking with provincial and municipal broadcasters, Kim pointed to late October as when life can begin to return to normal in Korea -- a shift in pandemic control strategy also described as “living with COVID-19.”

“About 80 percent of adults aged 18 and above are expected to become fully vaccinated before October ends, by which time normal life can resume in stages,” he said. The adult vaccination rate of 80 percent would “give the virus less space to roam,” he added.

Citing damage to the economy, he said it was “hard to ask small businesses to put up with pandemic-related restrictions any longer.”

According to the prime minister, how Korea would go about normal is twofold: by extending eligibility to groups so far not covered by the vaccination campaign -- minors and pregnant women -- and expanding at-home care for patients with mild illness to reduce the burden on health care systems.

He hinted that the plan for vaccinations for the rest of the year, to be unveiled in detail Monday afternoon, also included an extra round of “booster” vaccinations for older people and front-line health care workers. Soon, the gap between two doses of Pfizer and Moderna vaccines, which are currently administered six weeks apart, will be shortened as well, he said.

The prime minister blamed the Chuseok holiday weekend, which lasted until Wednesday, for cases rising at record-setting levels in the past few days.

“The holiday is taking a serious toll on the COVID-19 situation,” he said.

But the streak of record-shattering days may not be Chuseok’s doing, according to Dr. Jung Ki-suck, who headed the Korea Centers for Disease Control and Prevention in 2016-17. Given COVID-19’s average incubation period of five to seven days, the post-Chuseok surge has probably not begun yet, he said.

“Cases linked to Chuseok are likely not yet reflected in the numbers,” he said, explaining that the warning signs of “a surge upon a surge” were already there before the holiday could make an impact.

Despite testing performed per day dropping by nearly half to about 70,000 to 80,000 during the five-day weekend, there was no decline in cases, with the positivity rate in the period doubling to 2 percent.

He said cases were being traced to places “usually where you’d expect an outbreak would take place, like saunas, bars and other nightlife facilities.”

“Korea is now at a phase where it’s looking to lift, rather than tighten, public health interventions, according to government announcements,” he said, “which means that control of the spread will be more heavily reliant on vaccinations.”

On easing back into normalcy, he pointed out that throughout its course of the pandemic, Korea “never really had to sacrifice normal life too much” compared to other countries such as Australia, which is “undergoing a lockdown over a 100-something daily cases.”

“The closest thing we had to a lockdown was a nighttime curfew for high-risk businesses,” he said.

When Korea was counting an average of about 1,700 cases a day in the weeks leading up to Chuseok, intensive care beds across the country were half full, he warned. By that calculation, a couple of weeks of more than 3,000 cases could fill up beds for patients with severe or critical COVID-19.

As of 5 p.m. Saturday, 48 percent of all ICU beds for COVID-19 patients were occupied. In Seoul, which accounts for the majority of Korea’s cases, the occupancy rate was higher at 54 percent.

“Having normal after Chuseok was widely promoted too early, when barely 40 percent of the population were fully vaccinated,” he said. The “communication mishap” caused people “to let their guards down,” when “the messaging for more caution should have been sustained to motivate people to continue to practice social distancing.”

The good news was that the incidence of severe cases among people in their 70s and older, to whom vaccines were distributed early on, remained relatively low, said Eom, whose hospital saw an onslaught of younger patients in August. Many of the patients ending up at hospitals recently were in their 40s to 60s -- age groups that vaccines had taken longer, or are just getting to reach.

“As more people across demographics become fully immunized against COVID-19, we could expect a similar decline in hospitalizations,” he said.

In an emergency news briefing organized Saturday, the national health protection agency’s commissioner, Jeong Eun-kyeong, said health care capacities had room to cope with 2,500 to 3,000 cases occurring each day for another week or two.

After restrictions were eased earlier this month to permit families to gather over Chuseok, overall movements had increased, she said, and that based on the trends in health data, the number of cases could continue to hover above 3,000 a day this week.

She said whether to ease restrictions next month as planned depended on how much of the population was protected with vaccines by then.

The pressing task at the moment was lessening the caseload, she said, asking those who traveled for the holiday to get tested regardless of an absence of symptoms and cancel plans at least for the next two weeks.

“There’s no way around it but to follow the same safety precautions of wearing face masks, keeping indoor spaces well-ventilated, avoiding crowds and washing hands frequently,” she said.

By Saturday’s end, 74 percent of 51 million people in Korea had received at least one dose of a vaccine while 45 percent had been fully vaccinated, seven months since the vaccine campaign began in February.