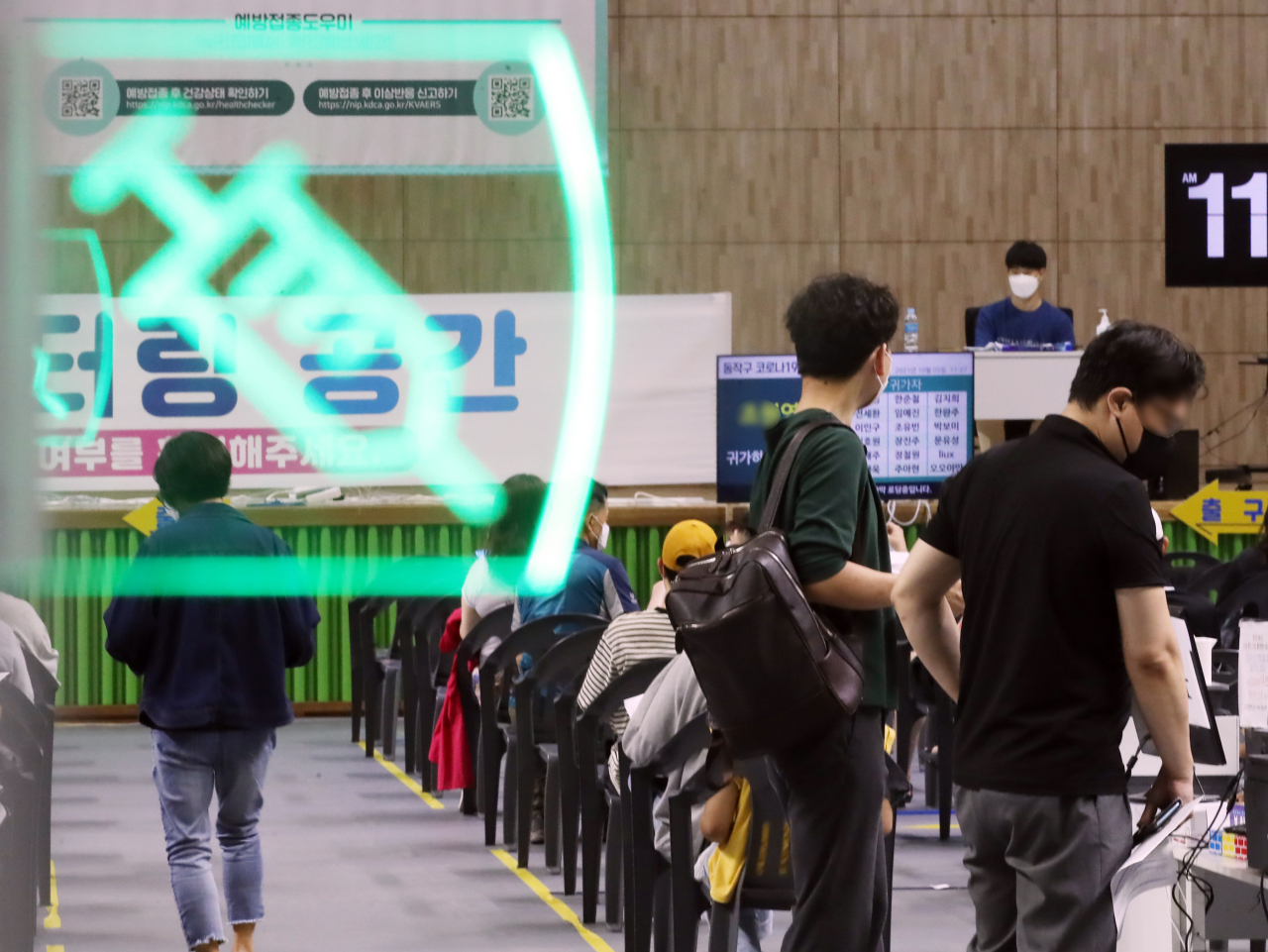 South Korea says that proof of COVID-19 vaccination may soon be necessary for people to enjoy more freedoms as it journeys toward normal.

The digitized vaccine passport would help minimize the disease circulating among the unvaccinated, the Ministry of Health and Welfare’s spokesperson Son Young-rae told reporters Tuesday, “which will determine the success of our ability to contain the pandemic as vaccination rates rise.”

The pass, meant to first and foremost incentivize vaccinations, will be instrumental as Korea shifts to “living with COVID-19,” slated for later this fall, he said.

The announcement has since drawn some protest online in the form of petitions posted on the presidential and parliamentary websites, although an Oct. 1 survey by Realmeter showed nearly two-thirds of 500 respondents saying they supported the idea of having a pass.


Leave no one behind

Dr. Jung Ki-suck, who headed the Korea Centers for Disease Control and Prevention in 2016-17, warned against the vaccine pass working as a tool to punish people who aren’t vaccinated.

“Korea’s version of the vaccine pass, I think, should serve as a thank you to people for partaking in the campaign,” he said, adding that the situations in Korea and countries like the US are different.

“In the US the states and local governments were paying people to get vaccinated,” he said. “For Korea the chief problem was shortages in vaccine supplies, not hesitancy. Once the vaccines became available, the Korean people responded with enthusiasm, as manifested in the high uptake.”

The government anticipates that Korea’s full vaccination rate, standing at 55 percent as of the latest statistics, will eventually parallel the partial vaccination rate of 77 percent, as most first-dose recipients tend not to forgo their second appointments.

Dr. Yang Kwang-mo of the Korean Society for Medical Ethics worried that it would be “difficult to reward people for getting the vaccine in a way that does not discriminate against people who aren’t vaccinated, which in turn would end up having an impact akin to a mandate.”

In other words, although the vaccine pass is not necessarily a mandate, it could compel people to have the vaccine through direct and indirect restrictions, he said.

“Not all of us can take the vaccine, nor can we force anyone to take it.” A coercive approach “can be counterproductive when there is high willingness to be vaccinated,” among other things.

“Since the cost-benefit trade-offs of the vaccine are less clear for healthy children, some may very well choose not to receive it. Rare, severe reactions after a first dose may prevent some people from completing their vaccination series. People allergic to an ingredient in the vaccine can’t get it, either.”

Childhood vaccinations of a compulsory nature have been “proved to be tremendously safe over several prior years,” he said. With COVID-19 vaccines, the safety of which is almost equally reassuring, the same has not been documented yet as their existence is more nascent. New findings are still emerging, with vaccine policy being adjusted accordingly as the rollout progresses.

A return to “normal” later this month, as proposed by the government, “should not leave behind people without vaccine coverage,” he said. “Fortunately for Korea, it looks like they will be a small minority.”

Korea University infectious disease professor Dr. Kim Woo-joo agreed that while vaccines are the most powerful weapons available against the pandemic, at the end of the day, people’s autonomy in deciding whether to receive vaccination should be respected on the condition that they are provided with sufficient, credible information.

“Mandates are the wrong way to bolster public confidence in vaccines,” he said. “Trust is earned through taking people’s concerns seriously, paying close attention to all safety signals, investigating those signals quickly and thoroughly, and then communicating the findings clearly.”

He said the use of a vaccine pass is better limited to risky, nonessential places like nightlife establishments. “As long as masks can be worn, and other safety steps taken, people should not be denied entry at everyday places.”

The digital vaccine pass would be an expansion of the smartphone-compatible QR code-based IDs used for contact tracing that are “based on murky legal grounds,” according to Jeong Hyun-seok, a lawyer specializing in health care.

He said the laws on infectious diseases, passed in the midst of the 2015 outbreak involving another coronavirus, MERS, do not specify the right of the authorities to ask or require people to present their proof of vaccination to physically enter public places.

While officially no such pass has been adopted here, businesses like restaurants and gyms can check people’s vaccination status using the same systems operated by Naver and Kakao for contact tracing. The two IT corporations update the user’s vaccine records via the government’s Immunization Register.

“When the code is scanned, an automated voice announces specifically whether one is partly or fully vaccinated, or not at all,” he said. “So in a sense, Korea already has a kind of a vaccine pass in place.”

Suh Chae-wan of Lawyers for a Democratic Society’s Human Rights Defense Center said the government has yet to offer an explanation on how digitizing personal information -- including health information such as one’s vaccination status -- and then letting private corporations manage them can be justified.

“The extent to which such data can be utilized and how it may be discarded are not at all clearly defined by existing laws,” he said. “Simply raising the possibility of government access to personal data can act as a constraint on privacy protection.”

One of the risks of the government’s greater access to private information was it being abused for purposes other than public health, such as police investigations. Three years ago, Korea’s top court ruled police using National Health Insurance Service records in tracking a suspect to be unconstitutional.

At the same time Suh said he was wary of approaches that often “pit freedom against safety from COVID-19, as if the two are competing goals.”

“Protecting rights does not have to come at the expense of compromising safety, or vice versa,” he said. “Since COVID-19 is an uncharted territory, the government must do more to come up with imaginative measures to balance both goals.”

He voiced concerns about regulations introduced to contain the spread of the disease becoming normalized and lingering well after the pandemic -- or their setting a precedent for readily reintroducing invasive surveillance in a future emergency.

“What’s missing in all these talks of going back to normal is how the government seeks to undo the restrictions that limit rights and freedoms.”

Lim Jie-hyun, a professor of transnational history at Sogang University, said the urgency of COVID-19 has stunned Korea into letting pass the “biopolitics, in which the value of hygiene trumps all else, coupled with high-tech surveillance” for over a year and a half.

“Korea’s efficiency in controlling COVID-19 is ironically what muffled the questions,” he said, but a scrutiny was in order.

“To what extent may authorities execute the powers entrusted to it to protect public health? If a different kind of emergency were to strike us, like a national security or political emergency, could we accept making similar sacrifices to individual freedom to safeguard collective security?”

As the protection provided by the vaccine is thought to wane about six to eight months after the last dose, such a pass would come with an expiration date, Lee Sang-won, another senior official at the agency, said in last week’s briefing. Neither he nor other officials have specified how long the pass could remain valid.

In Monday’s televised briefing, the Korea Disease Control and Prevention Agency’s chief Jeong Eun-kyeong said people in their 60s and older and others with immunocompromising conditions will probably need to get an extra round with a booster shot to be considered fully vaccinated and enjoy benefits associated with the status.

The agency was looking into whether all otherwise healthy adults, as opposed to just those aged 60 and up, should receive another dose after six months or longer of becoming fully vaccinated, she said. “That’s what Israel has done, but we’ll have to see if that’s a fitting or viable option for Korea.”

Jeong said as 70 percent of the Korean population is expected to become fully vaccinated sometime this month, the first week of November may be when the country could pivot to normal.

People who haven’t been vaccinated can present negative results of a PCR test performed within two to three days of a visit to social venues.