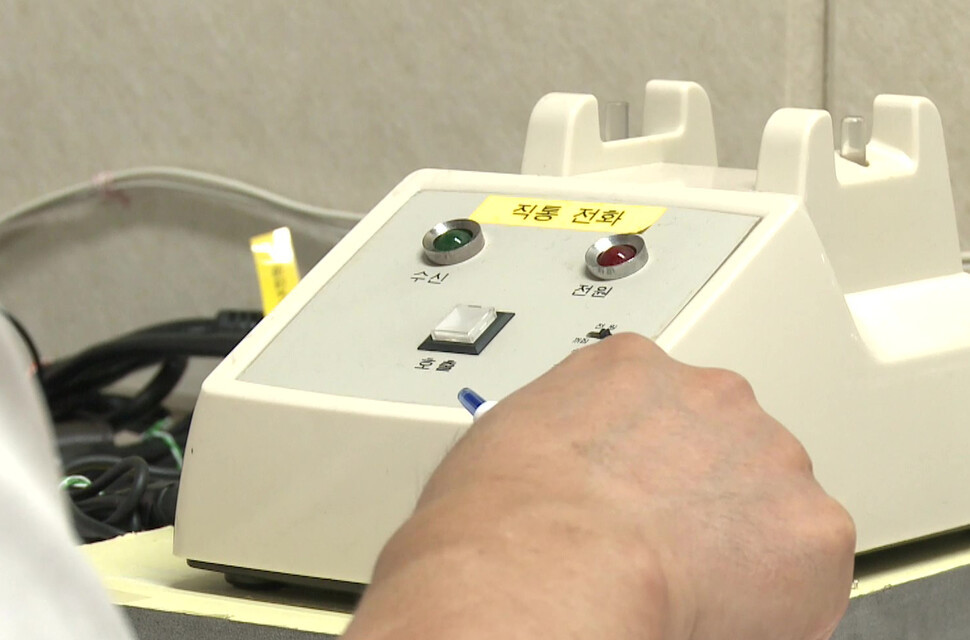 A phone at the Seoul bureau of the inter-Korean liaison office that connects to the North Korean side. (Unification Ministry)
Communication between South Korea and the North was restored Monday about two months after Pyongyang unilaterally cut off contact in August, raising cautious hopes of an inter-Korean rapprochement.

Liaison officials from both Koreas held two phone calls via a cross-border channel on Monday, one at 9 a.m. and one at 5 p.m., the Unification Ministry said, after previous calls from the South went unanswered. The two sides agreed to hold regular phone calls twice a day as they had in the past.

“I am very happy that the communication lines are restored,” a South Korean liaison officer told his North Korean counterpart on the phone. “As the hotlines are restored, we expect inter-Korean relations to develop to a new stage.”

The Defense Ministry also said both direct military communication lines -- the western and eastern hotlines -- had been reactivated. But Pyongyang has not answered Seoul’s calls via radio links shared among international merchant ships.

The North’s state-run Korean Central News Agency had earlier announced that the North would resume contact with its southern neighbor in the morning, using all the hotlines. It also called on Seoul to do its part.

“The South Korean authorities should make positive efforts to put the North-South ties on a right track and settle the important tasks which must be prioritized to open up the bright prospect in the future, bearing deep in mind the meaning of the restoration of communication lines,” it said.

The government here welcomed the move, saying it “laid the ground” for the restoration of inter-Korean relations and stability on the Korean Peninsula.

“Through the stable management of the communication lines and swift resumption of talks, the government hopes to start substantive discussions on implementing agreements between the two Koreas, improving inter-Korean relations and making peace on the Korean Peninsula,” the Unification Ministry said in a statement.

North Korean leader Kim Jong-un said Thursday that he was willing to restore the severed inter-Korean hotlines in October, adding that he believed this would help “realize the expectations and desire of the entire Korean nation.”

But at the same time, Kim said it would be up to the South Korean authorities whether inter-Korean ties would be restored, and he urged Seoul to drop its “double-dealing attitude” and “hostile viewpoint” toward his country.

Observers said Kim’s latest overture was aimed at pressing Seoul to take action in its favor, such as to convince Washington to ease sanctions.

In June last year, Pyongyang blew up an inter-Korean liaison office in its border town of Kaesong and cut off all communication with Seoul, in protest over defector groups here sending anti-Pyongyang leaflets into the North.

Over a year later, on July 27, the two sides announced that all hotlines were back in use -- the outcome of months of letters exchanged between South Korean President Moon Jae-in and the North’s Kim. It was the most noteworthy recent exchange between the two Koreas.

But the revived communication was short-lived, and in early August the North stopped answering the South’s calls in protest of the joint military drills between Seoul and Washington. Pyongyang has labeled the drills rehearsals for an invasion.

In the meantime, Pyongyang continued with a flurry of missile tests last month -- its first weapons launches in six months. It tested a new cruise missile, followed by two short-range ballistic missiles on Sept. 15, in defiance of UN Security Council resolutions banning the North from developing or testing nuclear weapons or ballistic missiles.

Last week the North fired what it called a new “hypersonic” missile, followed by a new type of anti-aircraft missile.

Despite the escalation of tensions, President Moon is pushing for greater engagement with the North as he prepares to leave office in May. He has called for the swift resumption of the stalled denuclearization talks with the North and has also proposed declaring a formal end to the Korean War. The two Koreas are still technically at war because the 1950-53 conflict ended not in a peace treaty but in an armistice agreement signed by the US-led United Nations Command, China and North Korea.