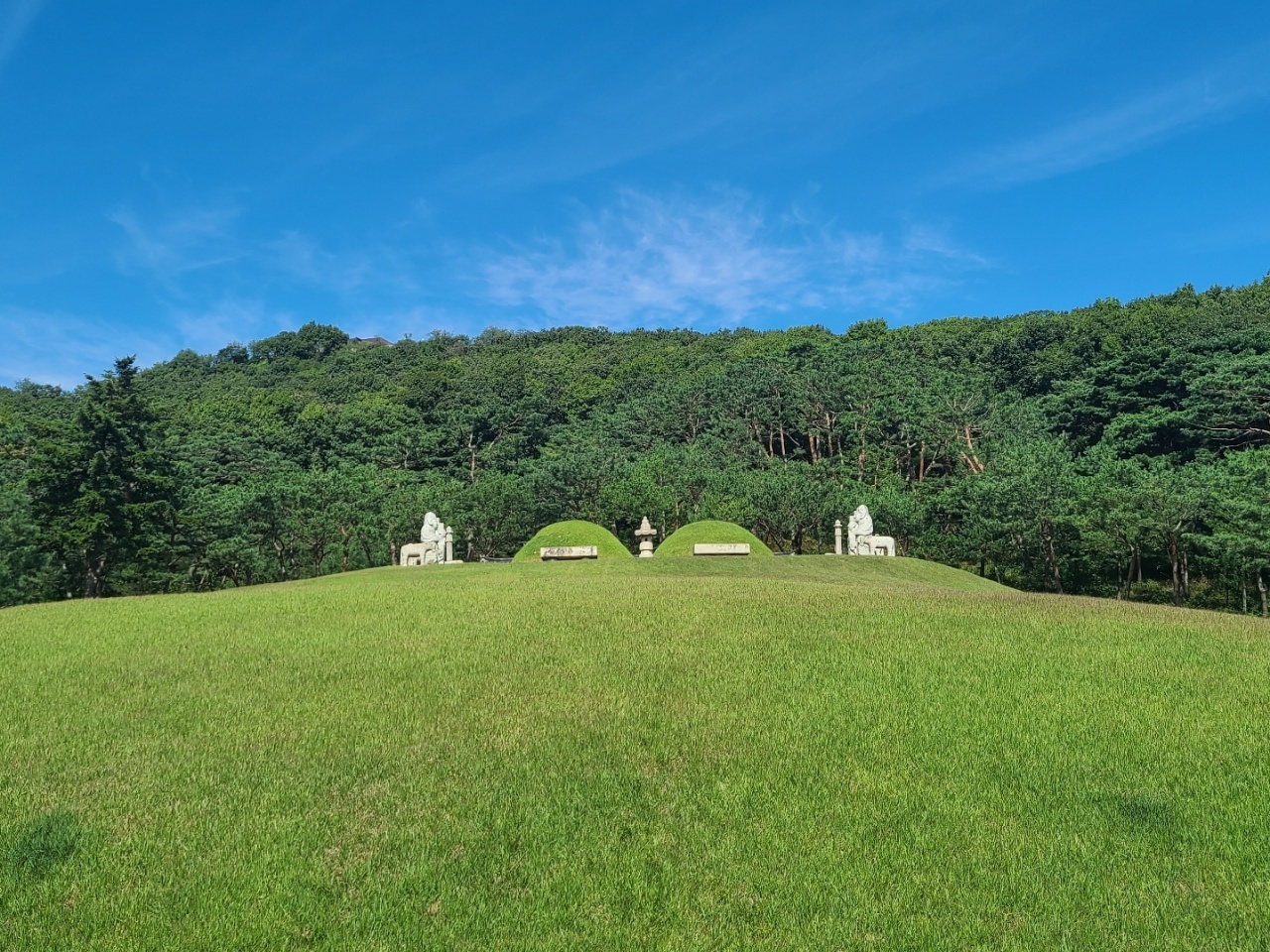 The tomb houses the parents of King Injo, the 16th ruler of Joseon, and was designated a UNESCO World Heritage Site in 2009 along with several other Joseon royal tombs around the country.

While children and parents posed for photos in front of Jangneung, which like most royal tombs stands at the foot of a mountain ridge -- its location was decided based on “pungsu jiri,” a Korean version of feng shui, which attempts to harmonize life energy with physical surroundings -- some people gazed through the treetops at the nearby cranes at a construction site in Incheon’s new town Geomdan.

“I came here after hearing news about a construction site near the royal tombs. As a person who is studying pungsu jiri, I think those apartments should be demolished because they are blocking the mountain view. Our ancestors created the tombs taking into consideration the surrounding environment. We should protect that,” a 58-year-old woman who wanted to be identified by her surname, Jung, told The Korea Herald on Sunday.

On Sept. 17 an online petition was posted on the Cheong Wa Dae website requesting the demolition of the buildings under construction, arguing that they lower the value of the UNESCO site. As of Monday, over 127,000 people had signed.

According to the CHA, under the law, construction companies must obtain permission from the agency before building any structure over 20 meters tall within a 500-meter radius of a designated cultural property. The three companies did not follow this procedure.

The construction companies say they are being falsely accused and that they obtained approval from Gimpo City in 2014 when they purchased the land from the Incheon Housing and City Development Corporation. Construction began after a 2019 review by the Seo-gu Incheon Metropolitan City Office, they say. 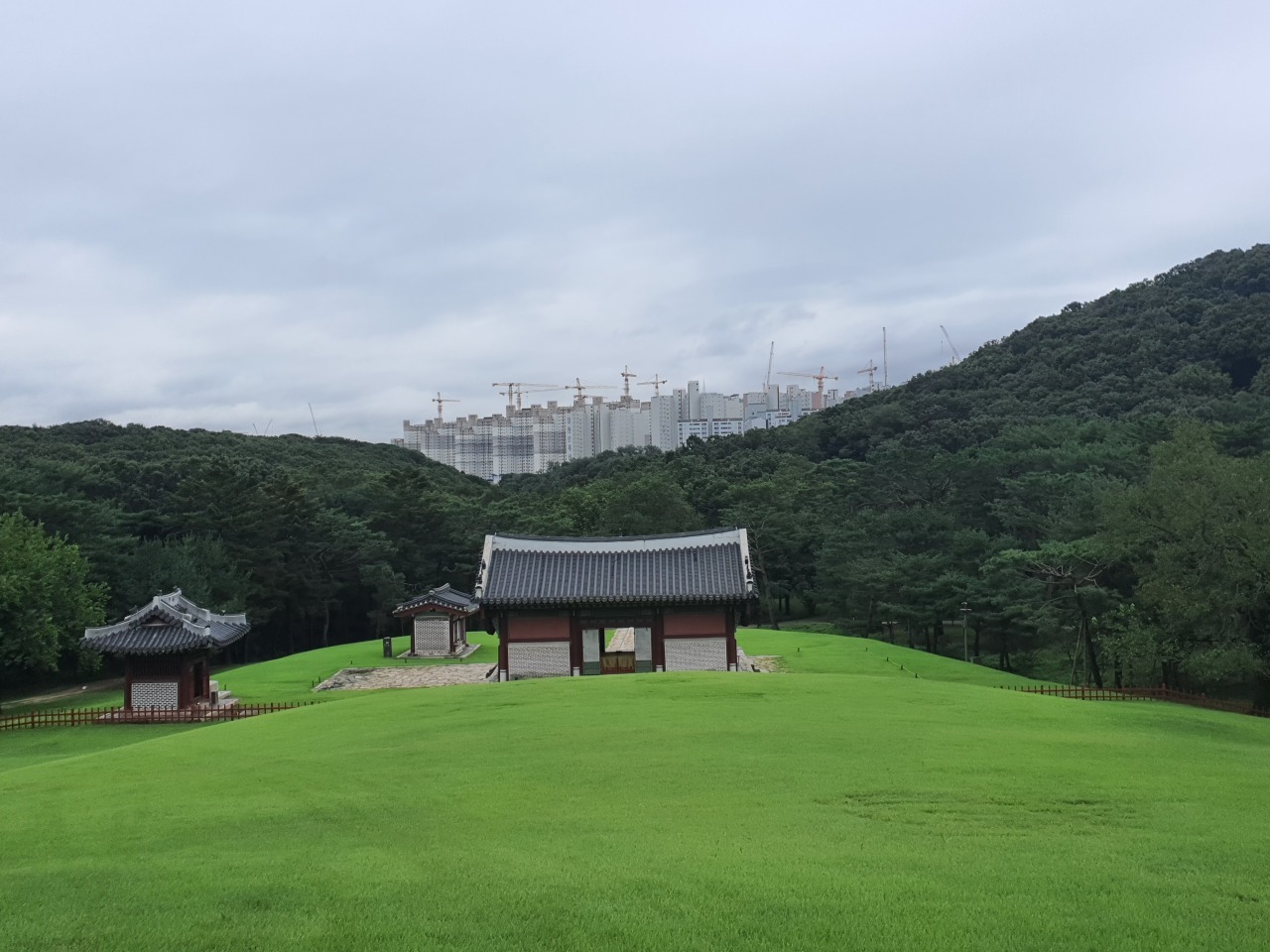 Across from the royal tomb Jangneung in Gimpo, Gyeonggi Province, construction of an apartment complex in Incheon’s new town of Geomdan is visible through the tops of the trees. (CHA)
“We will have to wait for the court’s decision and decide what we will do after that. Also, in August, we reviewed the situation and asked the construction firms to submit improvement plans by Oct. 11,” Park Chang-un, a CHA official, said. Park added that the CHA expects to receive the improvement plans without much resistance.

But concerns are growing as over 3,000 households were scheduled to move into the apartments in Geomdan next year.

“I live in Hoban Summit apartment in Geomdan new town, which is right next to the construction site. We also moved in recently and I understand their worries,” a man, 63, who wanted to be identified by his surname, Kim, told The Korea Herald. “I do worry that it will wreck the natural scenery because I think the apartment buildings will be more apparent when the winter comes. But I think simply demolishing them is too cruel.”

Kim’s wife, who declined to give her name, said the CHA should have suspended construction earlier.

“I think it is too late. I wonder what the CHA has been doing until now,” she said.

As to why the agency did not tackle the issue earlier, the CHA blamed the Seo-gu Incheon Metropolitan City Office.

“According to the cultural heritage protection law, the corporations have to report and go through the process and whether they follow the law is watched by the local governments. We don’t have enough personnel to watch over all the sites,” CHA official Park said.

Seo-gu officials could not be reached for comment on Monday morning.