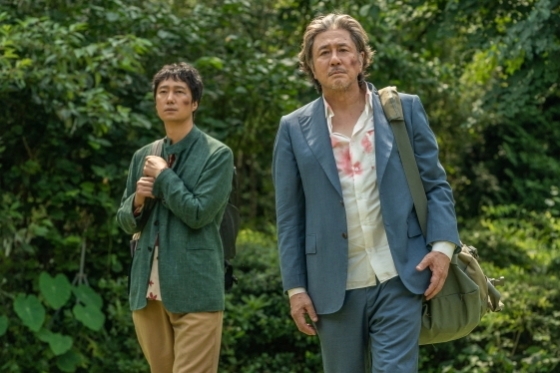 행복의 나라로: A scene from this year’s BIFF opener “Heaven: To the Land of Happiness,” directed by Im Sang-soo (BIFF)
The 26th Busan International Film Festival will return nearly to how it previously operated before the pandemic.

The festival is set to be held from Oct. 6 to 15 in Korea’s second city, Busan.

Last year, the BIFF organizer had to scale down and hold the fest without large crowd-gathering events such as the opening and closing ceremonies, outdoor greetings and open talk sessions. Each film was also screened only once at the Busan Cinema Center.

“This year we are screening all 100 percent of our selected movies offline,” BIFF chief program director Huh Moon-yung said during an online press conference held Wednesday. “This is because we value offline screening. Film festivals are all about gathering to watch a film and share feelings about it with each other.” 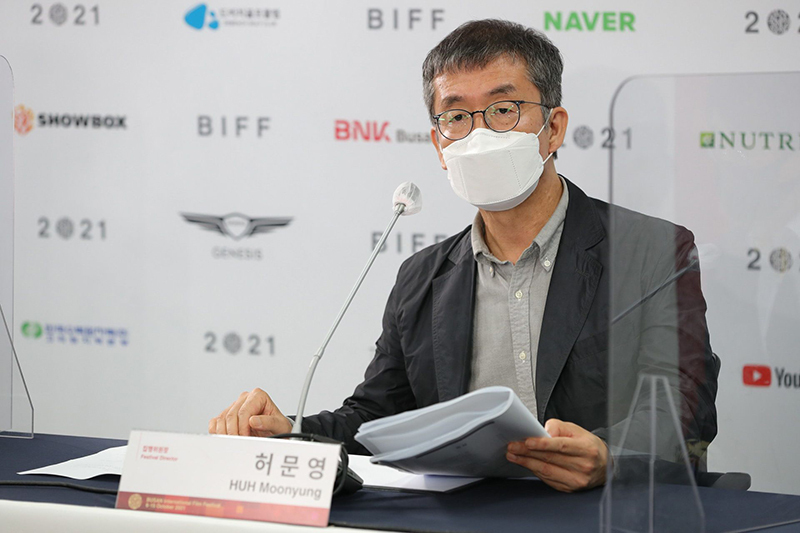 허문영: BIFF chief program director Huh Moon-yung talks during an online press conference Wednesday. (BIFF)
Huh explained that all invited features will be shown in six selected theaters in Busan and will not be screened online. Only short films will be made available for online screening on platforms YouTube and Naver Series On.

He added that the offline opening ceremony will be held normally at Busan Cinema Center this year.

Concerning whether guests like filmmakers and actors will be in attendance, the program director said many will be there for onsite events.

“Even some foreign guests will come. Because the COVID-19 situation in some Asian countries is not great, Asian guests from those countries cannot come. But many will come from America and Europe,” he said. The program director added that all Korean filmmakers will participate in the fest.

“The number of our 2021 selection fell slightly from over 300 films that we used to screen before the pandemic,” Huh said. “But I’m confident about the quality of our lineup.”

Eleven films from 10 countries, including “The Absent Director” from Arvand Dashtaray and “My Hometown” directed by Wang Er Zhuo, will vie for the prize in this year’s New Currents competition section.

During the press conference, Huh also talked about this year’s opener, Korea buddy drama ”Heaven: To the Land of Happiness, directed by Im Sang-soo.

“The moment when we watched the film we knew that it is perfect for our opener. It has artistic value and can also appeal to the public. It is an ensemble film with a great director and actors,” he said.

The closing film of BIFF is ”Anita,“ a biopic film on Hong Kong star Anita Mui, directed by Leung Longman.

During its prestigious Gala Presentation, the fest organizer will screen three films -- ”Annette,“ directed by Leos Carax, and ”Wheel of Fortune and Fantasy“ and ”Drive My Car,” both directed by Ryusuke Hamaguchi. The festival organizer highlighted that Hamaguchi will have a special discussion session with Oscar-winning director Bong Joon-ho during this year’s festival.

To adapt to a changing film industry, BIFF said it also established a few new programs this year.

The On Screen program is one of them. During this program, three selected highly anticipated drama series from streaming platforms will be up on the big screen. They are “Hellbound,” directed by Yeon Sang-ho, “My Name,” directed by Kim Jin-min, and “Forbidden,” co-directed by Anucha Boonyawatana and Josh Kim.

A day after the press conference, BIFF confirmed that its opening ceremony will be hosted by Hallyu star Song Joong-ki and Park So-dam, who had a breakthrough year in 2019 for her role in the Academy Award-winning film “Parasite.”

Meanwhile, the festival organizer planned to hold a special event Wednesday night to sell its tickets 20 percent cheaper than the normal price while streaming a special sales program on Naver’s home shopping platform for an hour. However, due to technical difficulties, the event was canceled.

“We plan to hold this event again next week, but a detailed schedule has not been fixed yet,” a BIFF spokesperson said.