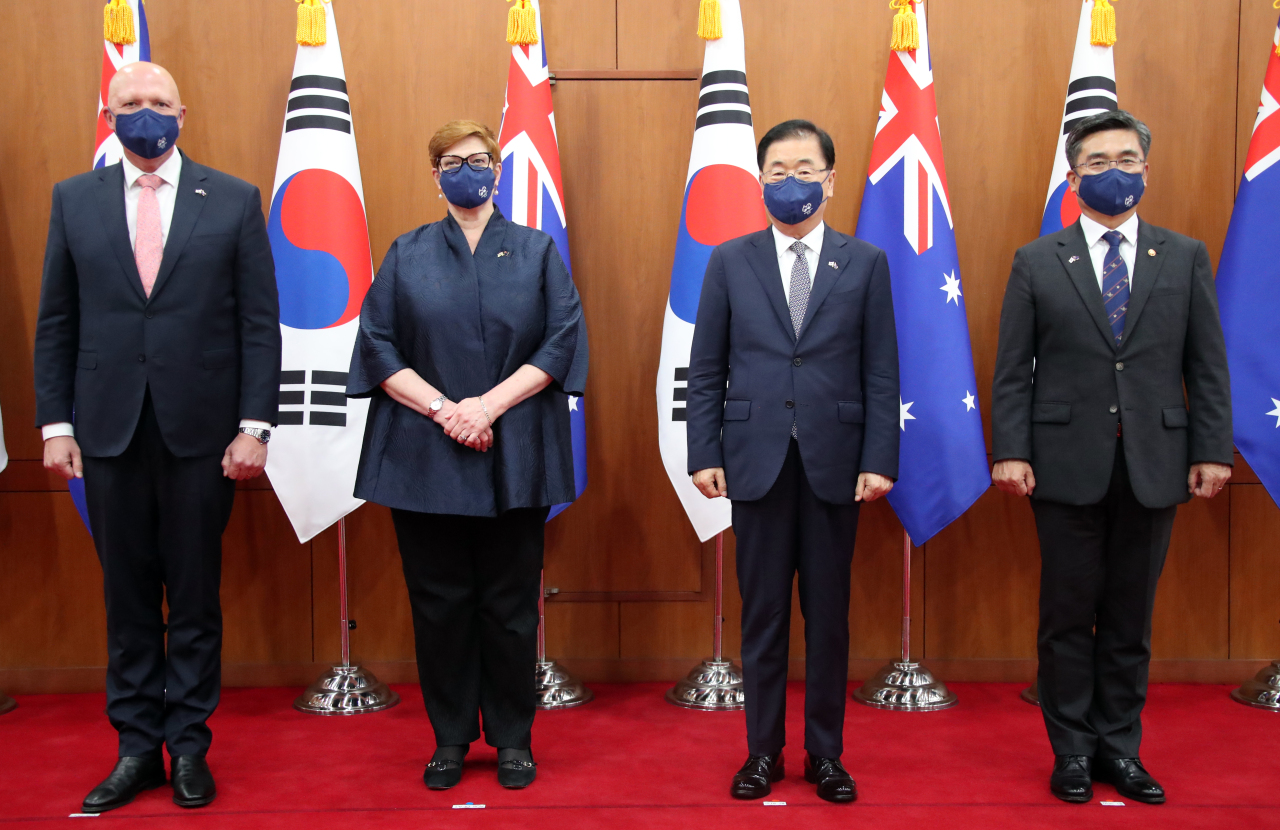 This year marks the 60th anniversary of the establishment of diplomatic ties between the two countries, which last held similar security talks in Sydney in December 2019.

“We share democratic values. We are committed to international rules and norms. We champion free and open trade. We understand the value of multilateralism,” Payne said at the start of the meeting. “Our leaders agreed at the G-7 Plus Summit in Cornwall to elevate our important relationship to a comprehensive strategic partnership.”

She said there had been “significant change” since the last “two-plus-two” meeting in 2019, such as the COVID-19 pandemic and “foreign interference that threatens regional peace and stability,” an apparent reference to China’s growing clout in the Indo-Pacific region.

“This two-plus-two meeting will be important in shaping how Australia and the ROK can progress an agenda of cooperation that contributes to and supports regional peace,” she said, stressing that the forum was an “essential” component of its bilateral architecture. ROK stands for South Korea’s official name, the Republic of Korea.

“There is economic coercion and foreign interference. There are cyberattacks and tactics that our respective countries are very familiar with,” he said, without specifying any country by name.

“We need to build capabilities to meet the challenges of today and the future,” said Dutton. “And we should enhance defense cooperation across the maritime, air and space domains. In particular, the defense industry, science and technology will be force multipliers and enablers.”

In turn, Chung called South Korea and Australia “middle powers that represent the Indo-Pacific region,” highlighting the expansion of cooperation both bilaterally and on the international stage, based on common values and strategic interests.

“With the global pandemic and escalating uncertainty in the international situation, it is very timely to have this two-plus-two meeting between the two countries as the need for communication and cooperation between middle powers like Korea and Australia is coming to the fore,” said Chung.

Suh also stressed that defense cooperation between the two countries would contribute to regional security, and that the two sides would discuss ways to cooperate for a stable regional environment.

Earlier in the day, the two visiting ministers met with President Moon Jae-in. During their meeting Moon said diplomatic and security cooperation with Australia were high priorities.

Moon, recognizing Australia’s support for the South Korean government’s peace efforts on the Korean Peninsula, requested Australia’s unchanging support and cooperation so that the efforts to restart talks with North Korea could bear fruit, according to Cheong Wa Dae.