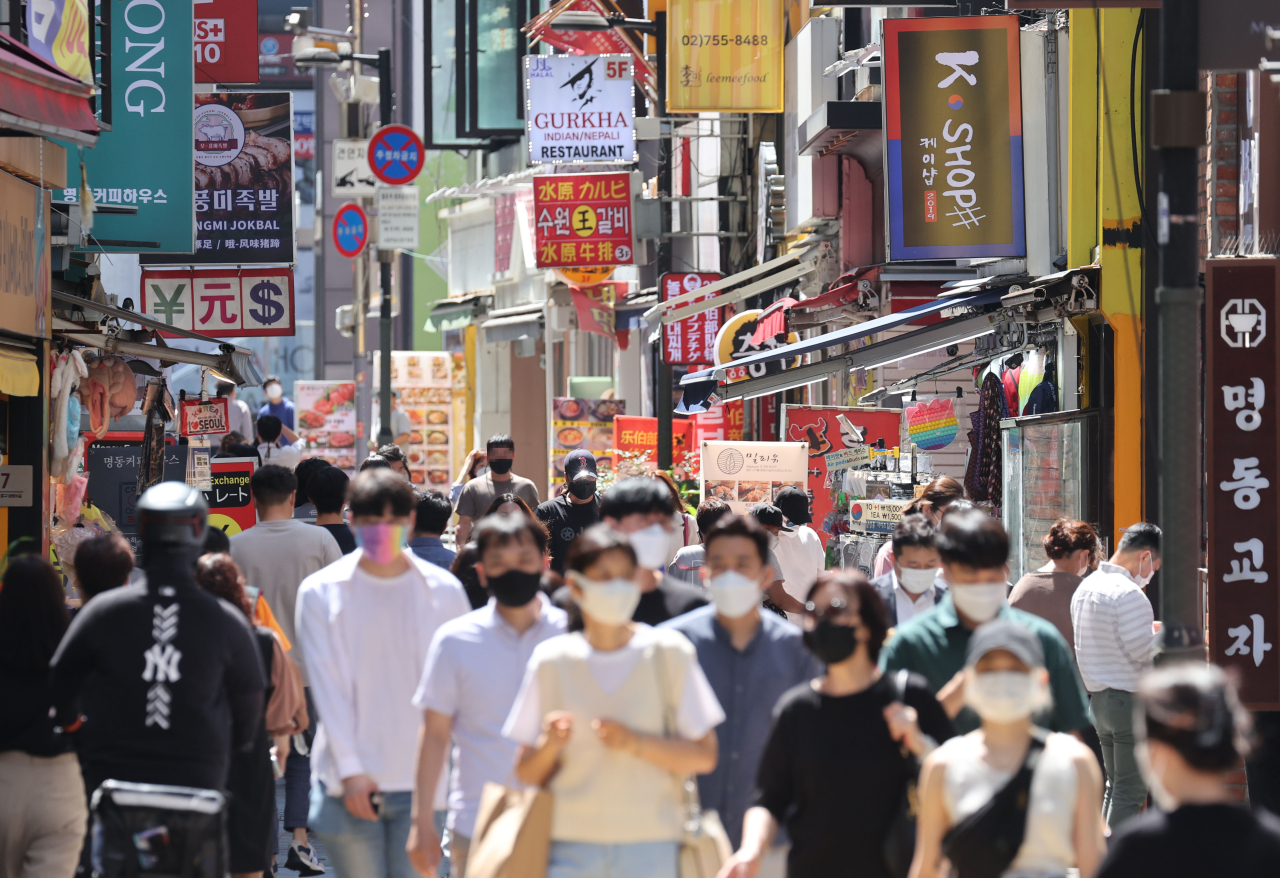 People walk in the streets of Myeong-dong in central Seoul during lunchtime on Friday. (Yonhap)
Fully vaccinated people will be allowed to have larger private gatherings starting Monday as Korea inches toward herd immunity.

The government on Friday announced its decision to extend the current social distancing rules -- Level 4 in Seoul, Gyeonggi Province and Incheon and Level 3 for the rest of the country -- for four weeks until Oct. 3.

But health authorities made a few adjustments to the guidelines in consideration of the prolonged distancing restrictions and the increasing number of vaccinated people.

In the Greater Seoul area, where Level 4 distancing guidelines will stay in place, the slightly eased rules allow private gatherings of up to six, but it has to include at least four fully inoculated people.

For instance, a gathering of three after 6 p.m. will have to include at least one fully vaccinated person.

Under Level 3 distancing rules, up to eight people can get together, but there must be at least four people who are fully inoculated in that case.

"If we can get by the next four weeks and control the (virus wave) at an appropriate level, I believe we can adjust distancing to a direction that is closer to our daily life from October and the government plans to push for that," Health Ministry spokesperson Son Young-rae said in a briefing Sunday.

"Whether this adjustment of distancing will result in a somewhat hasty easing of quarantine or a period of taking steps to stably expand our daily lives depends on all of our efforts."

Also from Monday, restaurants and cafes in the Greater Seoul area will be allowed to stay open until 10 p.m., unlike the past two weeks when they had to close at 9 p.m. Takeout and delivery services are permitted after the curfew.

For weddings, the government will allow up to 99 guests to attend if no meals are provided. Otherwise, the current cap of 49 guests will still apply.

For the upcoming Chuseok holiday slated for Sept. 20 to 22, family gatherings of up to eight, including four fully vaccinated people, will be allowed nationwide from Sept. 17 to 23.

The daily tally of COVID-19 infections has stayed in the four-digit range for two consecutive months since the country’s fourth virus wave broke out in early July.

According to the Korea Disease Control and Prevention Agency, the country logged 1,461 new cases of the coronavirus from Saturday, with Seoul and Gyeonggi Province reporting 505 and 441, respectively.

Meanwhile, applications for the government’s COVID-19 emergency relief funds will open from Monday.

Last week, the government announced that it will provide 250,000 won ($216) for each person in the bottom 88 percent income bracket to help people cope with the economic fallout due to the pandemic.

In order to avoid confusion or delays, a five-day rotational system based on the final digits of the residents’ year of birth will be implemented for the first week of application. People with the last digit of their birth year ending in 1 and 6 will be able to apply for relief funds on Monday. Tuesday is for those with birth years ending in 2 and 7, Wednesday for 3 and 8, Thursday for 4 and 9 and Friday for 5 and 0.

People can find out whether they are eligible for relief funds on websites and mobile apps of card companies and the National Health Insurance Service.

The relief funds can be deposited into a credit or check card, or residents can also apply for a prepaid card or gift card that can only be used at certain local stores.

The application period for the financial aid is until Oct. 29. If the money is not used by the end of the year, it will be returned to the state.

The relief funds can be used at designated offline businesses including traditional markets, restaurants, hospitals and convenience stores. But the money cannot be spent at department stores, large online malls and duty free stores.

More detailed information on where people can spend their relief funds is available on Naver and Kakao maps.