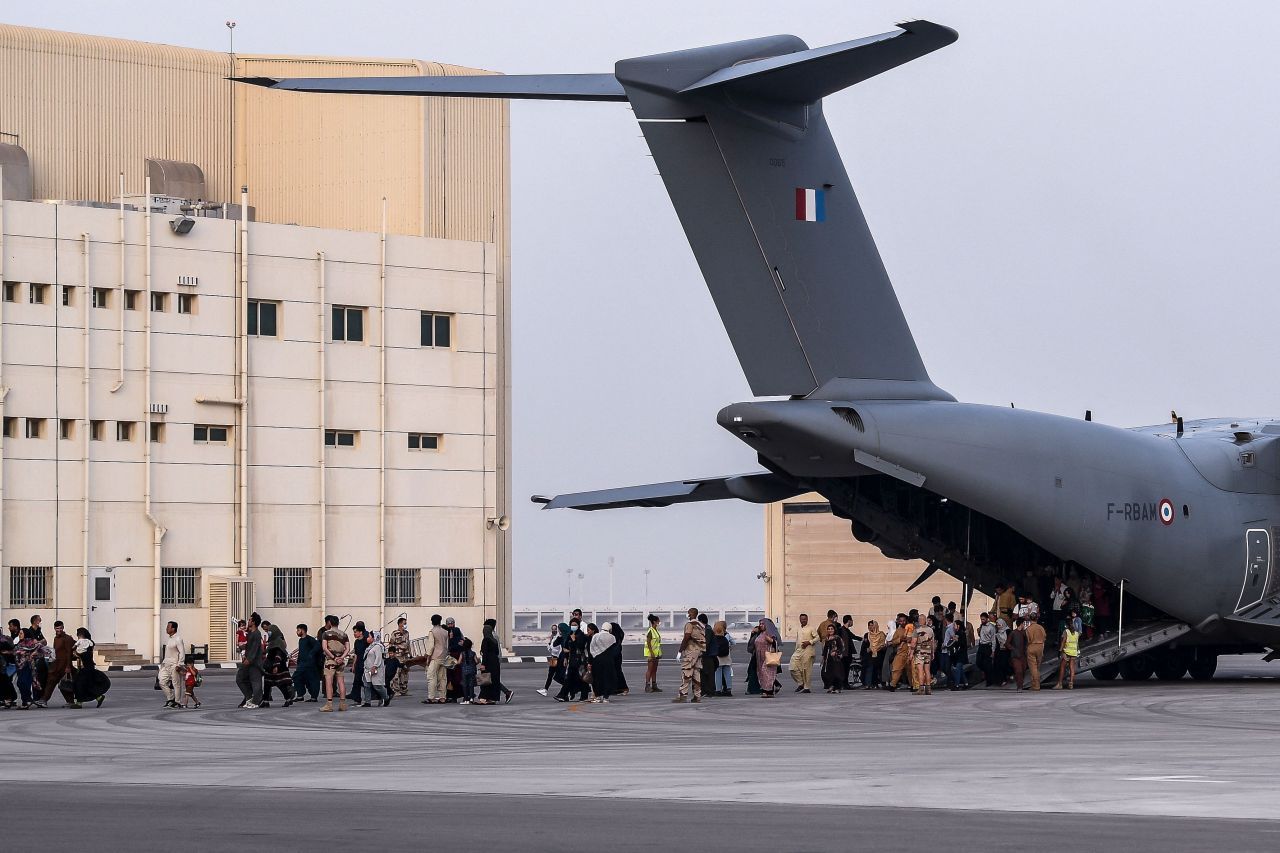 This AFP photo by Bertrand Guay shows Afghan people walking on the tarmac as they disembark from an Airbus A400M military transport aircraft at the French military air base 104 of Al Dhafra, near Abu Dhabi, on Monday, after being evacuated from Kabul as part of Operation Apagan. (AFP-Yonhap)
South Korea is airlifting a total of 391 Afghans out of the war-ravaged country, the Foreign Ministry said Wednesday, as part of Seoul’s mission to evacuate civilians who worked alongside the Korean government and are therefore vulnerable to retaliation.

Afghan allies and their families were expected to arrive at Incheon International Airport aboard military jets Thursday. In the operation, code-named “Operation Miracle,” Korea deployed three military planes to Afghanistan and Pakistan on Monday. They began ferrying Afghans out of Kabul to the Pakistani capital, Islamabad, Tuesday and were set to depart for Seoul on Wednesday.

“Fulfilling our moral responsibility to Afghans who helped us is something we must do and is meaningful,” President Moon Jae-in was quoted as saying, according to his spokesperson Park Kyung-mee.

Expressing gratitude to Koreans for their understanding and support for hosting Afghans, Moon said he was glad to be able to safely bring back Afghan employees who worked with the Korean government and their families.

The evacuees are translators, medical personnel, engineers and vocational trainers who have worked for years with the Korean Embassy in Afghanistan, the Korea International Cooperation Agency, Bagram Korean Hospital, the Korean Vocational Training Center and a provincial reconstruction team in Charikar, and their families. There are some 100 children in the group, including three newborns.

“As the situation in Afghanistan deteriorated, they have appealed to our embassy in Afghanistan for safety issues and requested assistance for flights to Korea,” said Second Vice Foreign Minister Choi Jong-moon.

“The government decided to accept them into our country, taking into account the moral responsibility for the serious situation facing the colleagues who have worked with us, the responsibility as a member of international society and our international stature as a leading nation of human rights, as well as considering many other countries are transporting the Afghans.”

Upon arriving here, the evacuees will be tested for COVID-19 and undergo quarantine and security screening. They will stay at a government-designated facility in Jincheon, North Chungcheong Province, for six to eight weeks, during which time they will undergo a mandatory two-week self-quarantine.

They will not be entering Korea as refugees, but as “persons of special merit,” according to Choi.

The Afghans will initially receive short-term visas valid for up to 90 days and then switch to long-term ones later, according to a ministry official. The government is also considering granting permanent residency. But it is still unclear whether the evacuees will want to settle in Korea or move on to other countries.

While all the evacuees will have undergone background checks upon their arrival, the government will verify their identification again in Korea, amid rising concerns about security and whether Seoul is ready to accept an influx of foreigners.

In mind of the public’s concerns, a ministry official stressed that these evacuees had worked along with the Korean government for seven to eight years and would have undergone background checks -- both when they started working and again before they left Kabul.

The government had planned to use foreign chartered flights to pull out the Afghans from Kabul. But it decided to dispatch three military jets Monday, after commercial flights were suspended as the situation in the country quickly worsened when the Taliban took over the country Aug. 15 amid the ongoing US troop withdrawal.

Initially, the government estimated the number of Afghan evacuees at 427. But 36 of them chose not to leave, instead either staying with their families in the country or moving to a third country, the official said.

At the beginning of the operation, the authorities weren’t sure how many people would make it to the airport on time amid the precarious situation on the ground. Access to the airport has been limited, with Taliban forces heavily guarding checkpoints to stop Afghans from fleeing the country. But later, the ministry was able to arrange a bus service for safe passage to the airport.

Seoul’s evacuation mission comes as the US and other countries are scrambling to evacuate their own citizens and Afghans who are deemed in danger of falling victim to retaliation by the Taliban for associating with Americans and US allies, ahead of an impending Aug. 31 deadline the US has set to complete the withdrawal of its forces from the country.

Seoul temporarily shut its embassy in Afghanistan on Aug. 15 and evacuated its diplomatic staff to Qatar.

Meanwhile, the government here on Wednesday decided to grant special stay permits to 434 Afghans residing in Korea on humanitarian grounds, until the political situation in Afghanistan stabilizes.

The Justice Ministry said of the total, 72 Afghans are staying illegally and 169 have less than six months left before their short-term or long-term visas expire.

The ministry will allow extensions after a screening process. Those whose stays have already expired will not face deportation, but they will be encouraged to leave the country voluntarily when the situation stabilizes and it is safe.