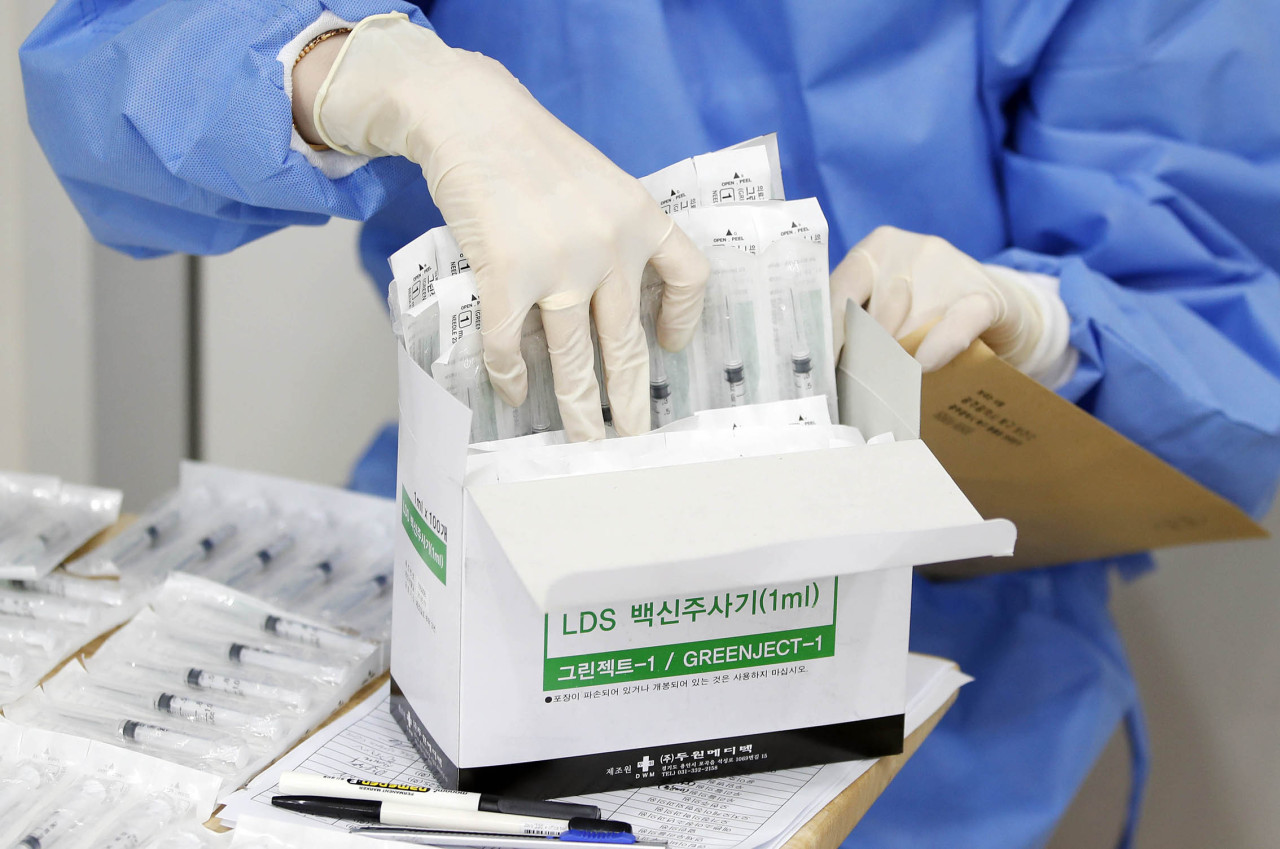 A medical worker prepares low dead space (LDS) syringes at a clinic in Gwangju, 329 kilometers south of Seoul, on Wednesday, in this photo provided by the Buk Ward of the city. (Buk Ward)
South Korea's new daily coronavirus cases fell back below 700 again Thursday, but the country is grappling with sporadic cluster infections amid the rising number of travelers enjoying warm weather.

There were three additional virus deaths, raising the total to 1,943. The fatality rate came to 1.4 percent.

Daily caseloads have been stuck in a tight range since late March with no significant signs of a letup, going through some ups and downs between the 400s and 700s.

Currently, the greater Seoul area, home to more than half of the country's 52 million people, is under Level 2 social distancing, the third highest in the five-tier scheme, while the rest of the country is mostly subject to Level 1.5 distancing.

With South Korea seeking to flatten the curve through mass vaccinations, the country will offer a set of benefits to those who have been inoculated.

Among others, those who have received their first jabs will be allowed to take their masks off outdoors starting in July. Those who are fully vaccinated will not be subject to the restrictions on their use of gyms, other facilities and religious gatherings.

The country's vaccination rollout has been sluggish compared to global peers.

South Korea has completed the inoculation of 2.01 million people, or 3.9 percent of the country's 52-million population.

AstraZeneca's vaccine has been given to 2.07 million people, while 1.96 million have received that of Pfizer.

Under the country's vaccination blueprint, the country aims to inoculate 13 million people by the end of June and achieve herd immunity by November.

Health authorities started to offer shots to South Koreans aged from 65 to 74 on Thursday.

South Korea also started to allow younger people who are not yet officially eligible to receive shots to apply for leftover AstraZeneca jabs through popular mobile platforms, including Kakao and Naver.

The country plans to offer inoculations to those aged from 50 to 59 starting in July. High school seniors will also receive shots ahead of the college entrance exam scheduled for later this year.

Health authorities said they reviewed 190 cases of side effects caused by COVID-19 vaccines and decided to provide compensation for 166 cases. Of them, 154 patients will each receive payment of below 300,000 won (US$268).

Of the locally transmitted cases, 216 came from Seoul and 168 from the surrounding Gyeonggi Province.

Over the past two weeks, around 26.4 percent of the newly added cases have had unknown transmission routes.

Imported cases came to nine, raising the total to 8,975.

It marked the first time for the figure to fall below 10 in seven months.

The number of patients in serious or critical condition came to 154, up three from the previous day.

The total number of people released from quarantine after making full recoveries was 128,180, up 606 from a day earlier. Around 92.7 percent of the COVID-19 patients reported here have been cured.