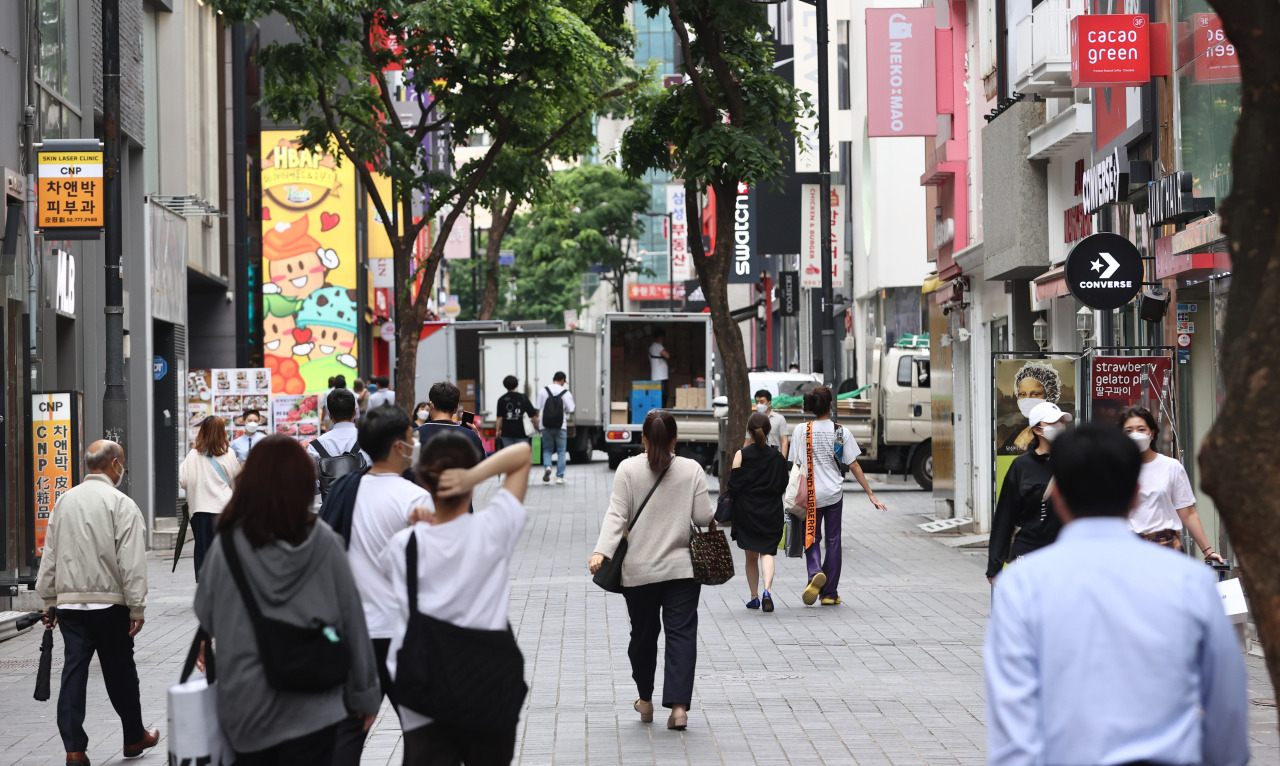 South Koreans who have received at least one COVID-19 shot will get to enjoy some of the perks of vaccinated status this summer.

The Ministry of Health and Welfare said Wednesday that two weeks after receiving a first dose of either one of the vaccines offered in the country -- from AstraZeneca or Pfizer -- people will be able to relax on social distancing and face mask-wearing. Both AstraZeneca and Pfizer vaccines require two doses for maximum protection.

More specifically, semi-vaccinated people can engage in larger family get-togethers and religious events from June, and go maskless outside from July, the ministry said. They will also be exempt from limits on the number of people that can gather at one time in cafes, restaurants and other public spaces.

Fully vaccinated people, meaning two weeks have elapsed since the second dose, can forgo masks in outdoor settings and socialize without restrictions. They won’t be subject to quarantine after traveling overseas or coming into close contact with an infected individual either, the ministry said.

Kwon Deok-cheol, the health minister, told a press briefing that Korea could ease out of most social distancing regulations come July. The goal is to administer first doses to 13 million people by June 19, and then to 36 million people by September or possibly earlier, he said.

“In summer when about a quarter of Koreans will have had at least one dose, we can move on to less restrictive social distancing rules. Then we can expect ease the restrictions further in fall, when more than 70 percent are vaccinated,” he said.

Experts advise caution against granting exemptions from social distancing and mask mandates before people have received their second doses.

So far 3.9 million people, or 7 percent of the Korean population, have received at least one dose of either AstraZeneca’s or Pfizer’s vaccine. The number of fully vaccinated people stands at 1.9 million, or 3 percent of the population.

“There’s no way to tell who is vaccinated and who isn’t,” Eom said, adding that non-socially distanced activities should be “strictly limited to fully vaccinated people, and amongst themselves only.”

Dr. Paik Soon-young, a virologist at Catholic University of Korea, pointed out that half-vaccinated people may not be as well protected against variants that are now circulating through communities.

Over a third of patient samples analyzed tested positive for variants last week, the Korea Disease Control and Prevention Agency said Monday. The variant first spotted in the UK, which is more transmissible than the original strain of the virus, is already dominant in southern coastal cities such as Ulsan and Busan.

People in their 60s and early 70s, who are the main targets of the vaccination efforts in June, have to wait until September before they can receive a second AstraZeneca shot, Paik said. Two doses of the AstraZeneca vaccine are administered 12 weeks apart.

“In the meantime, they remain relatively vulnerable to the threats of variants,” he said.

Park Young-joon, who heads the KDCA’s contact tracing team, admitted that letting partially vaccinated people off some of the safety precautions did not take into account the scenario of the vaccine-evasive variants becoming dominant across the country.

He said in response to The Korea Herald’s question that there needs to be “separate assessments for the possibility variants dominate infections spreading in the country.”

“If different conclusions are reached with variants in the equation, some adjustments might be necessary,” he said.

Paik of the Catholic University of Korea called for “vaccine incentives that do not compromise the safety of half-vaccinated and unvaccinated people until the vaccination campaign can reach the wider public.” The vaccinations haven’t even begun yet for people in the 60 to 74 age group, he said.

“Before we can fully vaccinate at least 70 percent of people 60 and up, it’s too early to loosen public health protocols.”