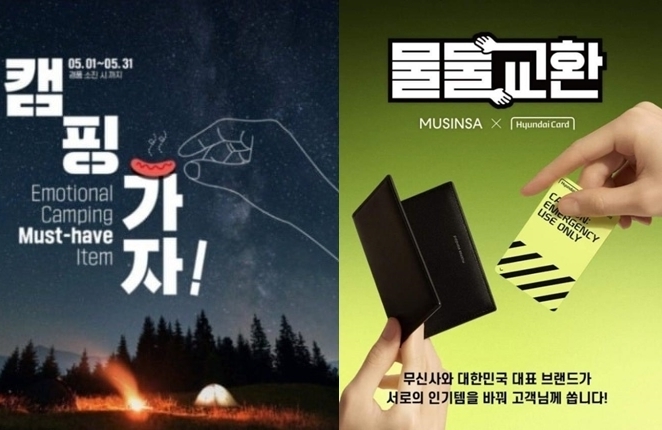 GS25 and Musinsa's pormotional images have been branded by some consumers as 'misandry.' (GS25, Musinsa)
Several South Korean retailers including convenience store GS25 and an online fashion store were forced to delete advertisements after critics accused “pinching hand signs” of being a symbol of misandry.

In a statement to store owners on Tuesday, GS25 CEO Cho Yoon-sung apologized for the design of a poster that caused “pain” and “inconvenience” to customers and vowed to “thoroughly” investigate those involved in making the image.

The now-deleted promotional image for camping items was criticized over the depiction of a hand picking a Vienna sausage, which critics say resembled the logo of Megalia -- a controversial radical feminist online community that was closed in 2017.

The logo was largely seen as a mockery of the size of male genitalia.

The controversy has also prompted an online petition on the presidential office’s website calling on the Navy to cut business ties with the convenience store chain.

“We should no longer give profits to the evil company hurting the morale of our military who are sacrificing their youth for this country,” the petition read.

Others, many of them women, have pushed back.

“With all the content pointing out man-bashing lately, I feel like the bastards who are so good at finding hidden metaphors have been gaslighting those who took issue with content that openly hates and mocks minorities, as if they don’t see it and pretend to not understand, which makes me more upset,” one viral tweet read.

The logo of controversial radical feminist online community Megalia (Megalia)
This is not the first time that a seemingly innocuous gesture has become a cultural war topic in South Korea.

Last year, broadcaster MBC’s educational platform iMBC Campus was forced to apologize after an advertisement banner featured on its website showed a logo that was associated with a controversial far-right online community known as Ilbe.

Hanyang University also came under fire in 2019 after featuring a version of its own emblem that was edited in the shape of the initial letters of Ilbe in Korean.

Online fashion store Musinsa issued a statement Monday to defend a promotional image for a collaboration event with Hyundai Card that depicts a hand picking a credit card.

“There has been no other intention than to promote the event behind the making of the image,” the company said on its website.

Sharing works of reference that inspired the image, Musinsa said both male and female staff were involved in the process and urged critics to refrain from “baseless criticisms.”

Kwak Geum-joo, a professor of psychology at Seoul National University, said the latest controversy surrounding the retail industry is an example of the deepening gender war in the country.

“It began as the voice of a small group of young men but it is now growing and snowballing with gender issues and division in society. These issues existed in the past of course but it is worsening, causing gender wars over something trivial and the vicious cycle continues,” Kwak said.

Kwak, however, added that politicians should refrain from fanning the flames.

“Whether we talk about whether the companies were in the right or wrong or whether to apologize or not, politicians should refrain from politicizing the issue at least and should focus on finding ways to unite instead.”

As more companies find themselves in a precarious situation, boycotting could only end up hurting store owners, instead of moving gender equality forward, warned Lee Young-ae, a professor at the department of consumer science at Incheon National University.

“We need to change the framing of the story a little here in that when we see companies as siding with one gender, those who end up being most affected are small business and franchise store owners,” Lee said.

In a further sign of the seriousness of the issue, McDonald’s Korea’s latest video on YouTube featuring TV personality Jaejae has racked up 24,000 dislikes against 47,000 likes as of Tuesday afternoon.

The fast food franchise became the latest gender war topic after a now-deleted post on an online forum declared a “war with feminists” and called to boycott McDonald’s for working with Jaejae, who has been branded by critics as a feminist figurehead.