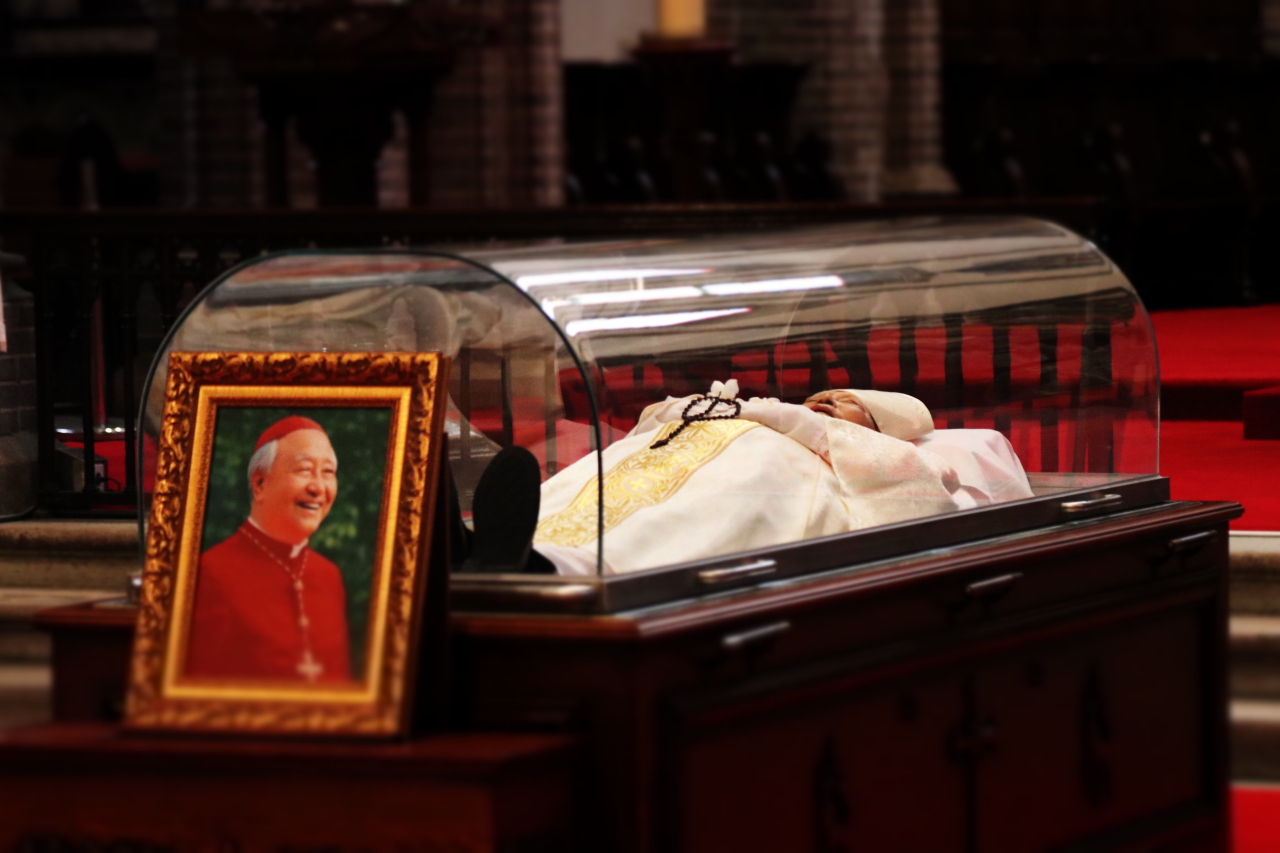 A requiem Mass for the cardinal took place at Myeongdong Cathedral in Seoul on Wednesday in the early morning hours, celebrated by Cardinal Andrew Yeom Soo-jung, the incumbent archbishop.

“If Cardinal Kim Sou-hwan was our father, Cardinal Cheong Jin-suk was our mother,” Yeom said during the requiem Mass.

Cheong currently lies in a glass coffin at Myeongdong Cathedral in central Seoul ahead of his funeral Mass on Saturday at 10 a.m.

“Cardinal Cheong said multiple times that living a happy life is living according to God’s will, and those were his last words,” Huh Young-yeop, a spokesman for the Archdiocese of Seoul, said Wednesday during a press briefing. “From today to Friday between 7 a.m. and 10 p.m., anyone who wishes to visit can freely come in and offer their condolences while following social distancing guidelines.”

After the funeral, Cheong will be moved to a cemetery for Catholic priests in Yongin, Gyeonggi Province.

Born into a Catholic family in 1931, Cheong studied chemical engineering at Seoul National University before he decided to change the course of his life. He made the decision after witnessing piles of corpses and narrowly escaping death while serving as a commissioned officer during the Korean War, which broke out in June 1950.

Cheong entered the priesthood in 1961 after graduating from Catholic University of Korea. In 1968, he went to Italy to study canon law at the Pontifical Urbaniana University for two years.

In May 1998, after Cardinal Kim stepped down, Cheong was appointed as the new archbishop of Seoul, a post he served in for 14 years until his retirement in 2012.

Cheong signed up to donate his corneas in 2006 and a surgeon removed them upon his death, according to the office of the Seoul Archdiocese.

In 2018, when he signed a paper refusing to be put on life support, he once again said he would like to donate his corneas.

After being admitted to Seoul St. Mary’s Hospital, Cheong had his entire bank account balance donated to a number of different organizations, including a soup kitchen run by the Seoul Archdiocese.

Huh from the Seoul Archdiocese said that around 8 million won ($7,000) remains since Cheong received additional money in April as a retired priest and also from the Ministry of Patriots and Veterans Affairs for his service during the Korean War.

The Seoul Archdiocese official explained that the remaining money will be used to buy gifts for nurses and doctors at the hospital where Cheong was treated, in accordance with his wishes.

“He was a truly gentle and loving elder. His death is very regrettable as he gave peace not only to Catholics but also to (non-Catholic) people throughout his life, since his ordination as a Catholic bishop in Korea at the age of 39,” Moon wrote.

Moon also added that people could learn a valuable lesson about sharing and coexistence from the cardinal’s life.

“His saying, ‘The most important thing is a policy that centers around people, not money,’ was deeply engraved into people’s minds,” Moon said. “I will remember the cardinal’s spirit. Rest in eternal peace.”

Other religious leaders also paid their respects to the late cardinal.

“We send condolences on the death of the cardinal, who pursued living happily while respecting life,” the United Christian Churches of Korea said in a statement.

The UCCK is one of the biggest associations of Protestant churches in the country.

“He always wanted churches to be the light and salt of society and gave a lot of attention to providing social welfare services to the poor,” Ven. Wonhaeng, president of the Jogye Order of Korean Buddhism, said in a statement. “Our religious leaders will pass on his faith in peace and reconciliation that Cardinal Cheong left behind. Rest in peace.”

“Gratitude and love that the cardinal planted in people’s hearts and our society lead all of us to the road to happiness,” a Won Buddhism official said in a statement.