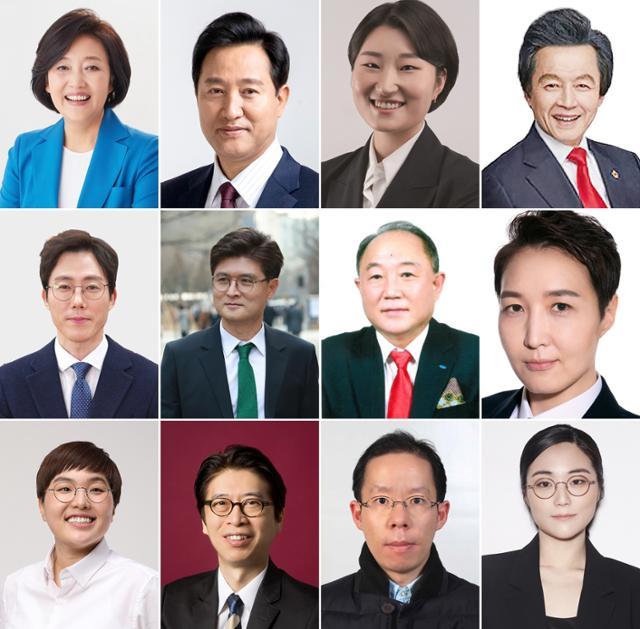 The candidates running in the April 7 Seoul mayoral by-election, from left, are (top row) Park Young-sun of the Democratic Party of Korea, Oh Se-hoon of the People Power Party, Shin Ji-hye of the Basic Income Party, Huh Kyung-young of the National Revolutionary Party, (middle row) Oh Tae-yang of the Mirae Party, Lee Su-bong of the Minsaeng Party, Bae Young-kyu of the New Liberal Democratic Union, Kim Jin-ah of the Women’s Party, (bottom row) Song Myung-sook of the Jinbo Party, and independent candidates Chung Dong-hee, Lee Do-yeop and Shin Ji-ye. (Yonhap)
As the April 7 by-election to choose Seoul’s next mayor approaches, a fierce battle is ongoing between the ruling and main opposition parties. At the same time, 10 minor parties and independent candidates are appealing to voters by talking about gender equality, LGBTQ rights, basic income and the environment.

The 10 candidates, whose combined approval rating is less than 5 percent, are getting voters’ attention with issues that major candidates haven’t paid much attention to.

Socially liberal politician Shin Ji-hye of the Basic Income Party has pledged to provide a monthly basic income of 250,000 won ($220) for all Seoul citizens to build a better social safety net and remedy social disadvantages. Identifying herself as a feminist candidate, Shin also vowed to make free sanitary pads and the abortion drug mifepristone available at 25 health centers in the city.

Another feminist politician, Kim Jin-ah of the Women’s Party, has made pledges concerning women’s safety. She would launch three organizations to respond to violence against women and would ensure that 50 percent of public housing units went to female buyers.

Oh Tae-yang from the Mirae Party, a pacifist who became the first conscientious objector in South Korea to refuse military service on secular grounds, promised to make Seoul a free city for sexual minorities. He would work for an ordinance to support same-sex marriage and wants the city to officially sponsor the Seoul Queer Culture Festival.

Independent candidate Shin Ji-ye, who ran as a candidate for the Green Party in the 2018 Seoul mayoral election, vowed to set up a dedicated gender violence organization under the mayor and to officially sponsor the Seoul Queer Culture Festival.

Lee Su-bong of the Minsaeng Party said if elected he would launch a campaign to reduce waste in the city by 50 percent. Song Myung-sook of the Jinbo Party pledged to convert Teheran-ro in Gangnam-gu to a two-lane road from the current 10 to reduce carbon emissions.

To run as a candidate in Seoul’s mayoral election, a person must provide a 50 million won deposit. Candidates who get less than 10 percent of the votes won’t get any money back. Why are these candidates running in an election knowing they are likely to lose money? Experts say it is a chance for the minor parties, which have no seats in the National Assembly, to promote themselves and their policies.

“This is a huge opportunity for minor parties to promote their political agenda to people and make their identity stand out through the election campaign,” said Bae Jong-chang, a chief of research firm InsightK.