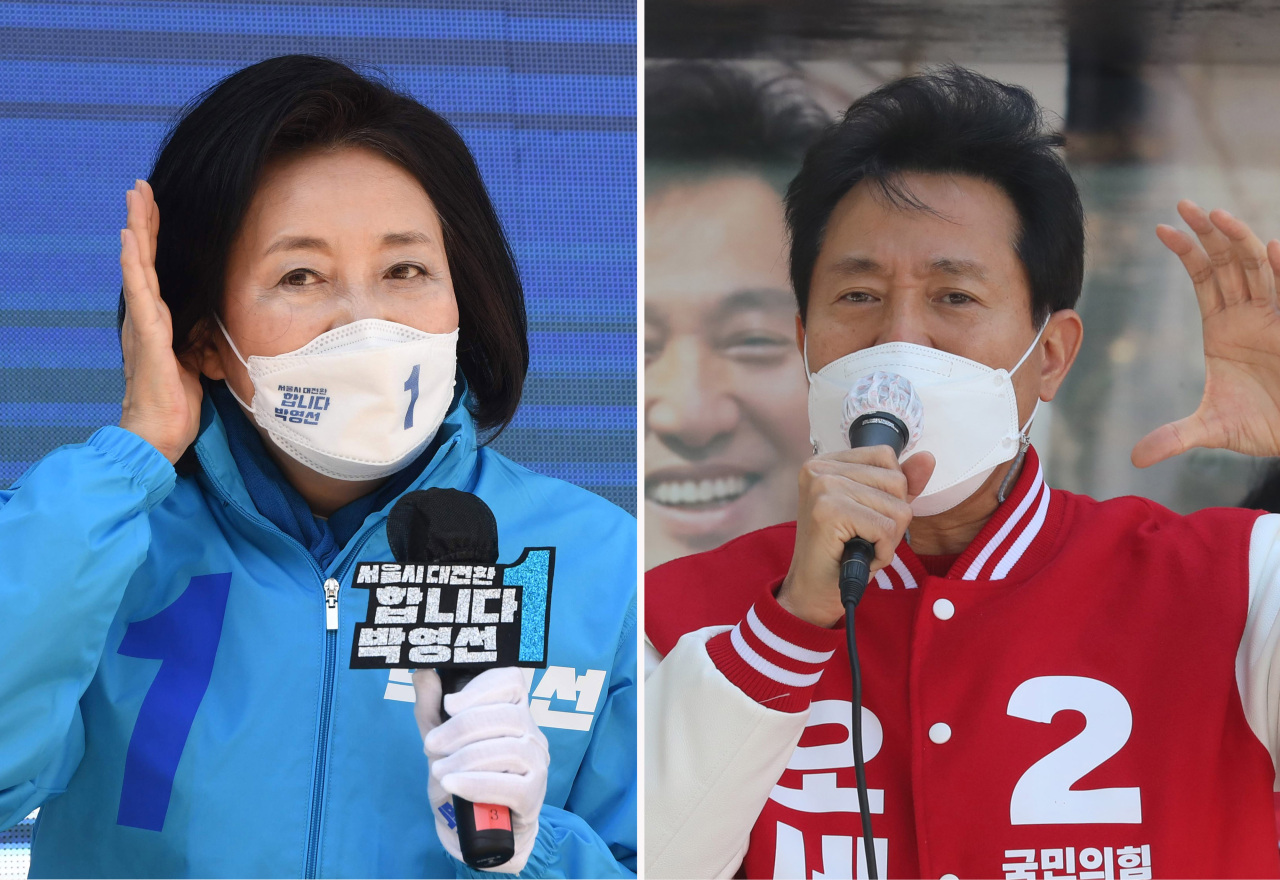 These photos provided by the National Assembly press corps show the Democratic Party's Seoul mayoral candidate Park Young-sun (L) and People Power Party candidate Oh Se-hoon during their election campaigns on Tuesday. (Yonhap)
Rival parties were rushing to rally support in their last-minute election campaigning Wednesday, with the Seoul and Busan mayoral by-elections, seen as a potential game changer for next year's presidential election, only a week away.

Some 8.4 million voters in Seoul are set to vote for a new mayor on April 7 in the by-elections that come about a year ahead of the 2022 presidential poll.

The mayoral seat in Busan, South Korea's second-biggest city, is also up for grabs in the elections, along with two regional administrative posts and 17 seats on regional legislative councils.

The results of the upcoming elections are sure to serve as a key barometer of public opinion in the lead-up to the presidential election set for March 2022.

Candidates from the conservative main opposition People Power Party (PPP) were leading their rivals from the ruling Democratic Party (DP) by wide margins for both of the high-stakes Seoul and Busan mayoral seats, according to latest opinion polls.

Angling for a potential reversal of public opinion, the DP's Seoul mayoral candidate Park Young-sun, backed by her party, has been trying to appease the public, angered by skyrocketing housing prices under the Moon Jae-in administration and his ruling party.

"I am well aware how angry and upset you are over the real estate issues," Lee Nak-yon, the co-chairman of the DP's campaign committee for the coming elections, told voters while campaigning for Park at a market in northern Seoul a day earlier.

"I am dying of anger myself. I am also very regretful and heartbroken at the same time. ... We will repent and correct whatever we can (to normalize the market)," he said.

Lee again officially apologized to the public at a press conference at the National Assembly on Wednesday over his party and the government's failure to curb soaring housing prices, as well as the real estate scandal.

Many experts are, however, taking the DP's election bids as an uphill battle.

"The DP can only start gaining ground after shaking off negative factors facing the party. But it seems to be still trapped in the real estate issue," Bae Cheol-ho, an analyst at local pollster Realmeter, told Yonhap News Agency.

"With the real estate issue remaining unsettled, the public mentality (prioritizing the need to pass) a judgment against the government is still in progress," he noted.

The PPP and its Seoul mayoral candidate Oh Se-hoon were, meanwhile, continuing their efforts to leverage the relentless public outrage over the real estate issue to consolidate their election dominance.

Many expect the pressing real estate issue could turn swing votes in favor of the opposition bloc, running on the election platform that zeroes in on the ruling bloc's unsuccessful real estate and housing policies.

The PPP's recent enlistment of Ahn Cheol-soo, the leader of the minor opposition People's Party who lost a bipartisan primary against Oh, is expected to further help the party soak up moderate voters.

"Not many people would be affected by mudslinging campaigns (by the rival parties against each other) now that their effects have almost run out ... a key element (determining the election results) will be on how strongly the supporters of the ruling bloc will stand together in the face of the sense of crisis," said Yoon Tae-gon, an analyst at Themoa, a think tank on political issues. (Yonhap)