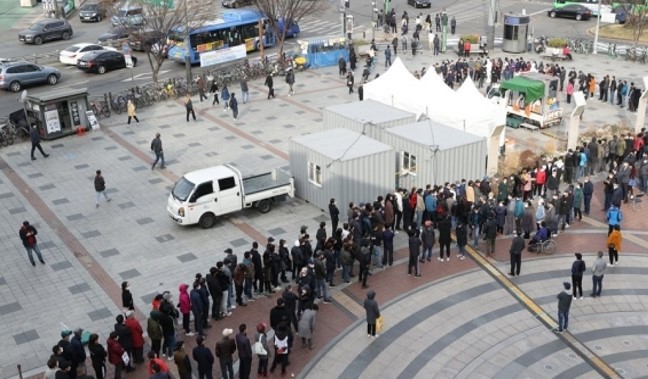 People line up for COVID-19 tests in Guro-gu, Seoul, March 19. (Yonhap)
The Seoul city government on Friday withdrew an order requiring mandatory coronavirus testing for all foreign workers after facing criticism from foreigners, medical workers and the human rights commission.

The Seoul Metropolitan Government released a statement on Friday afternoon, saying, “We changed the administrative order issued on March 17 after the Central Disaster and Safety Countermeasures Headquarters requested the withdrawal of the order.”

“We changed from the mandate to test all foreign workers to recommendation on testing (workers) in high-risk workplaces,” it said.

The government now only recommends that foreign workers at high-risk workplaces, such as those in close, dense and enclosed work environments, undergo diagnostic tests by March 31.

It also recommends Koreans employed at the same business establishments to get tested.

The change came after the National Human Rights Commission of Korea also launched an investigation on Friday into the city government’s decision to mandate coronavirus tests for all foreign workers, after some foreigners filed a petition against the administrative order.

“Foreigners have filed a petition with the NHRC, saying that they feel hatred and racism,” NHRC Chairperson Choi Young-ae said in a statement. “In response, the NHRC will quickly determine whether discrimination and human rights violations are committed.”

Earlier on Tuesday, the Seoul government issued an administrative order requiring all foreign workers in the city to undergo diagnostic tests March 17-31 to prevent the spread of the coronavirus. Fines of up to 2 million won ($1,778) will be imposed if they fail to get tested during the period.