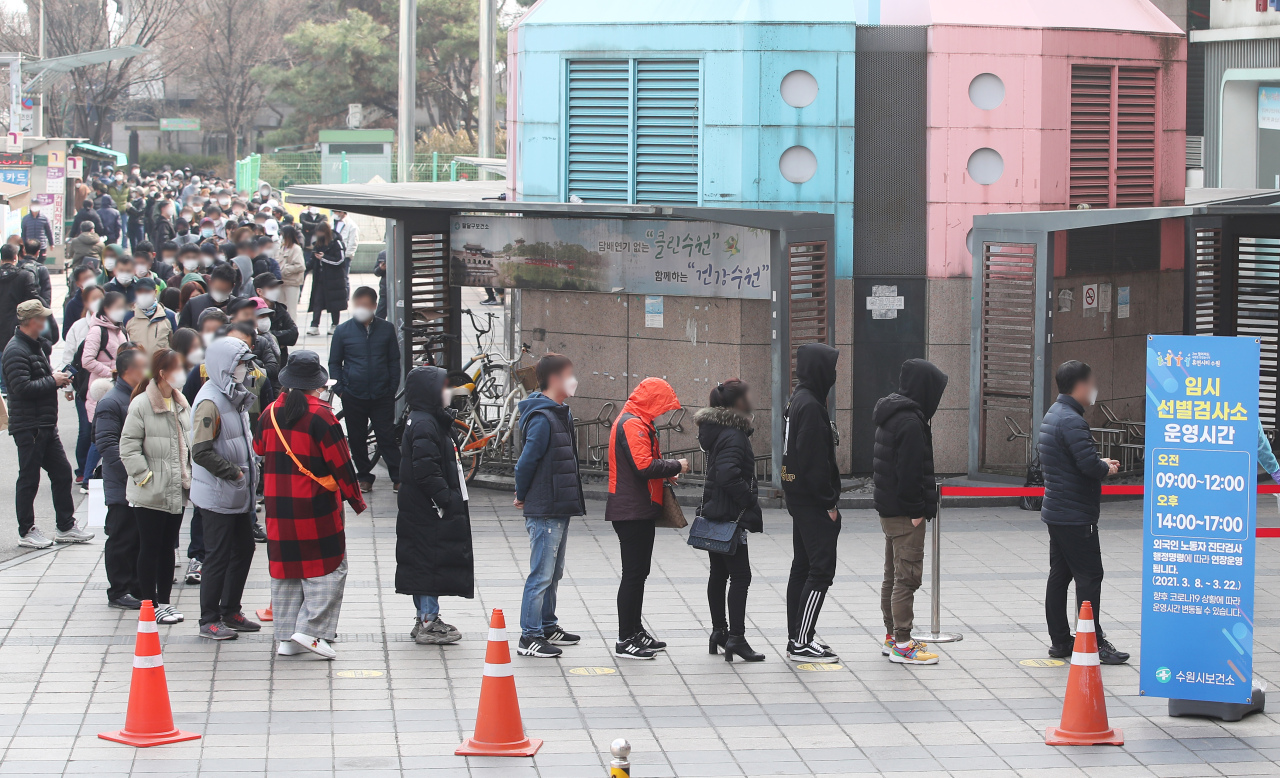 Korean and foreign nationals line up by a testing center in Suwon, Gyeonggi Province, on Sunday as they wait to be diagnosed for COVID-19. (Yonhap)
Local expat communities are expressing anger and disappointment over the Seoul and Gyeonggi Province government mandates for all foreign workers to submit themselves to be tested for COVID-19.

The Seoul city government said Tuesday that all foreign workers will be required to take COVID-19 tests by the end of this month. The measure follows Gyeonggi Province’s order made days earlier to have all foreigners in the province undergo COVID-19 testing by March 22.

The measures drew mixed response among expat residents, with many infuriated with the administrative order for being “blatantly racist.” Throughout this year until Wednesday, foreigners accounted for 6.3 percent of the infections in Seoul.

“I understand the government wants to identify cases of COVID-19 among undocumented workers ... and maybe extending the rule to all foreigners was a way for them to encourage undocumented workers in getting tested,” an English teacher in Seoul named Anne told The Korea Herald.

“But it puts the blame squarely on foreigners for the virus, where really it’s the conditions in which they are living.”

Anne, a Canadian, said the mandates have put migrant workers like her in a vulnerable position. As seen in many cases since the pandemic started, those confirmed with COVID-19 saw their residential and employment statuses threatened.

And while carrying out the latest orders, foreign workers are likely to be blamed by others as scapegoats and treated as catalysts for businesses to close and people to lose jobs. Anne said the policy is discriminatory as it draws “this obvious line between the foreign and native citizens of the country.”

“Foreigners are a convenient scapegoat for the shortcomings of the government,” she added. “I think it would be fine to test everyone who may have been in contact with each other, like normal contact tracing methods that test both foreigners and Korean nationals.”

Another expat named Dmitri Kim living in Ansan, Gyeonggi Province, found the mandates themselves acceptable, but the Russian national of Korean descent said the scheme must be more organized and thought through, as evidenced by the chaos experienced at temporary testing centers throughout the province.

“When this order came out from Gyeonggi Province, every foreign worker rushed to nearby testing centers the next day, and it was absolutely crowded with a lot of people,” Kim said.

“Most of us had to wait for like six hours without being allowed to go to toilet or get something to eat, and there wasn’t any safe distance among those in line. And even then, only a few people ended up getting the test that day.”

Kim said the government needs to be better at organizing testing centers and recruit more medical workers to actually collect samples from foreign workers on time. If lines remain long, many foreign workers won’t be able to meet the deadline of this coming Monday set by the Gyeonggi Province government.

In light of such worries, some expat representative groups have openly asked the governments of Seoul and Gyeonggi Province to protect foreign workers from being disadvantaged or becoming infected with the coronavirus while following the orders.

“We urge (the Seoul Metropolitan Government) to request the concerned employer to provide a paid leave and avoid the situation of ‘chaos & overcrowded’ and understaffed at testing centers, and also to guarantee the social distancing in order to avoid the putting visitors at risk of potential infection,” the Non-Resident Nepali Association-South Korea said in a tweet Tuesday.

A public petition to the Blue House asked the two administrative orders to be removed and replaced with a new order to make COVID-19 testing mandatory for all people regardless of nationality in areas with a high prevalence of the virus.

“This blanket mandate for foreigners is dangerous, as many who show no signs of having COVID-19 must go to COVID-19 testing sites with people who potentially are infected,” the petition reads.

“This discriminatory testing mandate clearly violates the rights of foreigners in Gyeonggi-do, in relation to their safety and health. I call for the blue house to remove this mandate in Gyeonggi-do, and prevent any future blanket mandates requiring only foreigners to be tested.”

Some foreigners said they were bothered by the order’s lack of clarity in terms of scope and that it was not available in other languages. Some expats contacted by The Korea Herald were still not sure if they needed to be tested.

“I don’t think I ever saw any English version of the official administrative order,” said a Seoul-based freelance graphic designer from Australia, who wished to remain anonymous for this story.

“I only had to read it through online news, and even then, my friends and I were debating for hours if this was true. And I’m still not sure if I am included in this order, how I am supposed to check in with local testing centers and who is going to pay for the test. I just don’t know.”

An English version of the administrative order -- which had become effective as of Wednesday -- did not become available until Thursday on the Seoul Global Center website.

Expats also stressed that the latest debate sparks memories of how xenophobic Korea has been, with different standards and rules applied to foreigners.

“At the start of the pandemic, the South Korean government issued harsher quarantine restrictions for foreign residents coming from abroad, whereas Koreans coming back home from overseas, were met with little restrictions -- some leaving their quarantine after three days to go to a cafe,” said Lateisha Howe, an owner of a travel blog named “Travels of the People.”

“Different rules for foreign residents of Korea has always been a thing though. In Korea, sometimes you will walk past a restaurant, sauna, club or gym -- only to be turned away because you are not Korean.”

The Seoul Foreign Residents Council, which was launched by the Seoul city government in 2015, said in a statement sent to The Korea Herald on Thursday that its representatives have not defined the order from the Seoul Metropolitan Government as discrimination against foreign nationals.

“It should be noted, that ahead of issuing such an order, our representatives in the Foreign Residents Council have worked closely in cooperation with the working group from mayoral office and were able to propose some amendments which we think were crucial in the interests of all foreigners residing in Korea,” Boqiev said in the statement.

The council chair added that most foreign residents have apparently perceived the order as discriminatory and racist, causing “huge misunderstandings and critics in our foreign community.” However, the number of foreigners affected by the virus has risen day by day, which justifies the order being imposed, he wrote.