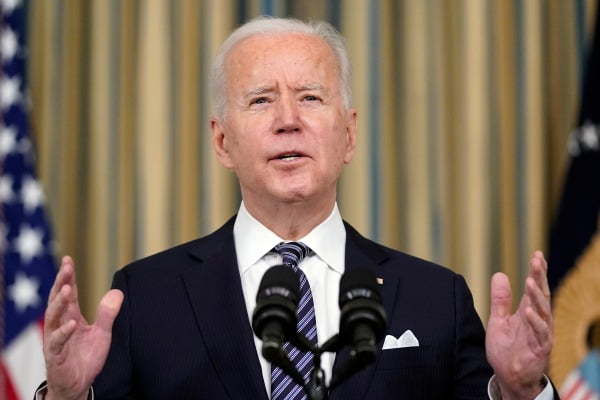 "The investigation is ongoing. And the question of motivation is still to be determined," Biden said after speaking to the US. attorney general and director fo the Federal Bureau of Investigation about their ongoing investigation of the shootings on the previous day that killed eight people, including four people of Korean descent.

"But whatever the motivation here, I know that Asian Americans are very concerned, because as you know I've been speaking about the brutality against Asian Americans for the last couple of months and I think it is very troubling," the president added.

White House spokeswoman Jen Psaki earlier said the president had been briefed overnight about the "horrific shootings" that took place at three spas in Atlanta, Georgia.

A 21-year-old suspect, identified as Robert Aaron Long, has been taken into custody. He was charged with four counts of murder and one count of aggravated assault, according to the local sheriff's office.

Psaki explained the reason the president did not declare the shootings a hate crime against the Asian American community was because an investigation is ongoing.

Law enforcement officials in Georgia earlier said it was too early to determine the motivation of the shootings.

Still, it did not change the nature of the "horrific" attacks committed against the Asian American community, the White House spokeswoman noted.

"That doesn't change the fact that this news was horrific. And broadly speaking, there has been an increase, as you have noted and we have all seen, in attacks in crimes, and hate crimes as well and other circumstances, against Asian Americans," she told a daily press briefing at the White House.

The spokeswoman added hate-motivated crimes against Asian Americans will be part of an ongoing review on domestic violent extremism.

"Broadly speaking, as you know, there's also an ongoing review of domestic violent extremism that is wide ranging, that is a 100-day review that will take a look at a range of issues and that will also be a longer term strategic comprehensive look at how that impacts our society and this will certainly be a part of that," said Psaki.

She also noted the recent increase in violence against Asian Americans was partly due to an "inaccurate" or "unfair" description of the COVID-19 pandemic by the previous Trump administration.

"I think there's no question that some of the damaging rhetoric that we saw during the prior administration...calling COVID the Wuhan (China) virus or other things that led to perceptions of the Asian American community that are inaccurate or unfair, has elevated threats against Asian Americans and we're seeing that around the country," said Psaki.

A congressional caucus of Asian Pacific Americans earlier said more than 3,000 anti-Asian hate incidents have been reported in the US since early 2020.

Vice President Kamala Harris also offered her condolences to the those killed in the shootings and their families.

"It is tragic. Our country, the president and I and all of us, we grieve for those lost. Our prayers are with the families of those who have been killed," the vice president said, according to White House pool reports.

Harris also noted the exact motive of the suspect has yet to be determined, but underscored the shock it must have inflicted on the Asian-American community.

"The investigation is ongoing. We don't yet know, we're not yet clear about the motive. But I do want to say to our Asian-American community that we stand with you and understand how this has frightened and shocked and outraged all people," she said to reporters at the White House. (Yonhap)