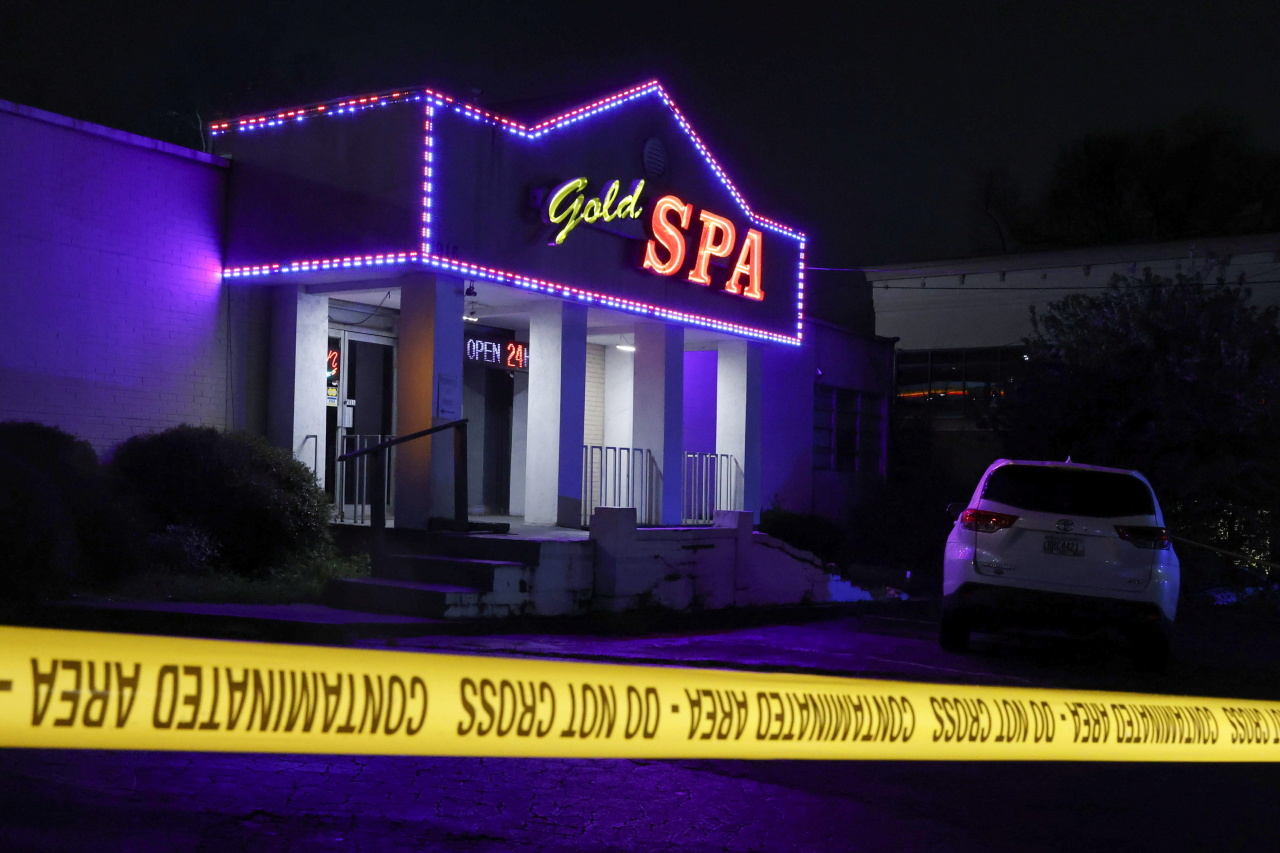 Crime scene tape surrounds Gold Spa after deadly shootings at a massage parlor and two day spas in the Atlanta area, in Atlanta, Georgia, US Tuesday. (Reuters-Yonhap)
Four people of Korean descent were among those killed in a series of deadly shootings in the US state of Georgia, Seoul’s Ministry of Foreign Affairs said Wednesday.

South Korea‘s Consulate General in Atlanta sent consular staff members to check if there were any other Korean causalities in the shootings, the ministry said.

In the shootings, at least eight people, most of them Asian women, were killed at three different spas in the Atlanta area.

According to reports, a 21-year-old white man has been taken into custody on suspicion of staging all three attacks.

Four of the victims were killed at Young’s Asian Massage near Acworth, an Atlanta suburb, the Atlanta Journal-Constitution reported.

Captain Jay Baker of the Cherokee County sheriff’s office told the paper the victims were two Asian women, a white woman, and a white man, while a Hispanic man was wounded.

Police told the Atlanta Journal-Constitution that all four Atlanta victims were Asian women.

Authorities have identified Robert Aaron Long as a suspect in all three shootings.

Based on the pattern of surveillance video from the shooting scenes, Atlanta police spokesman Sgt. John Chafee told AFP: “It is extremely likely our suspect is the same as Cherokee County‘s, who is in custody.”

“We are working closely with them to confirm with certainty our cases are related,” he added.

Long was taken into custody after a “brief pursuit” about 240 kilometers from Atlanta, according to a statement by the Georgia Department of Safety on Facebook.

According to reports, the Federal Bureau of Investigation is assisting in the investigation.

The shootings come as reports of attacks against Asian Americans, primarily elders, have spiked in recent months -- fueled by the Covid-19 pandemic, activists believe, and by talk of the “Chinese virus” by former president Donald Trump and others.

The New York police department’s counterterrorism bureau said it was “monitoring the shooting of Asian Americans in Georgia” and deploying officers “to our great Asian communities across the city out of an abundance of caution,” though it added there was no known link to the city.

While racial motivation can be hard to establish, a study by the Center for the Study of Hate and Extremism at California State University San Bernardino found that reported anti-Asian hate crimes nearly tripled from 49 to 122 cases last year across 16 major US cities including New York and Los Angeles -- even as overall hate crime fell seven percent.

Georgia is home to nearly 500,000 Asian residents, or just over four percent of its population, according to the Asian American Advocacy Fund.

“As details continue to emerge, this attack sadly follows the unacceptable pattern of violence against Asian Americans that has skyrocketed throughout this pandemic,” said Congresswoman Nikema Williams, who is also the state party’s chairwoman.

“Today‘s tragic killings in #Atlanta reaffirm the need for us to step up and protect ALL of America’s marginalized minorities from racism,” tweeted Ben Crump, a lawyer known for representing several high-profile Black victims of police brutality in the United States in recent years.

In an address to the nation last Thursday, President Joe Biden forcefully condemned what he called “vicious hate crimes against Asian Americans who have been attacked, harassed, blamed and scapegoated.”

“It‘s wrong. It’s un-American. And it must stop,” he said. (From news reports)