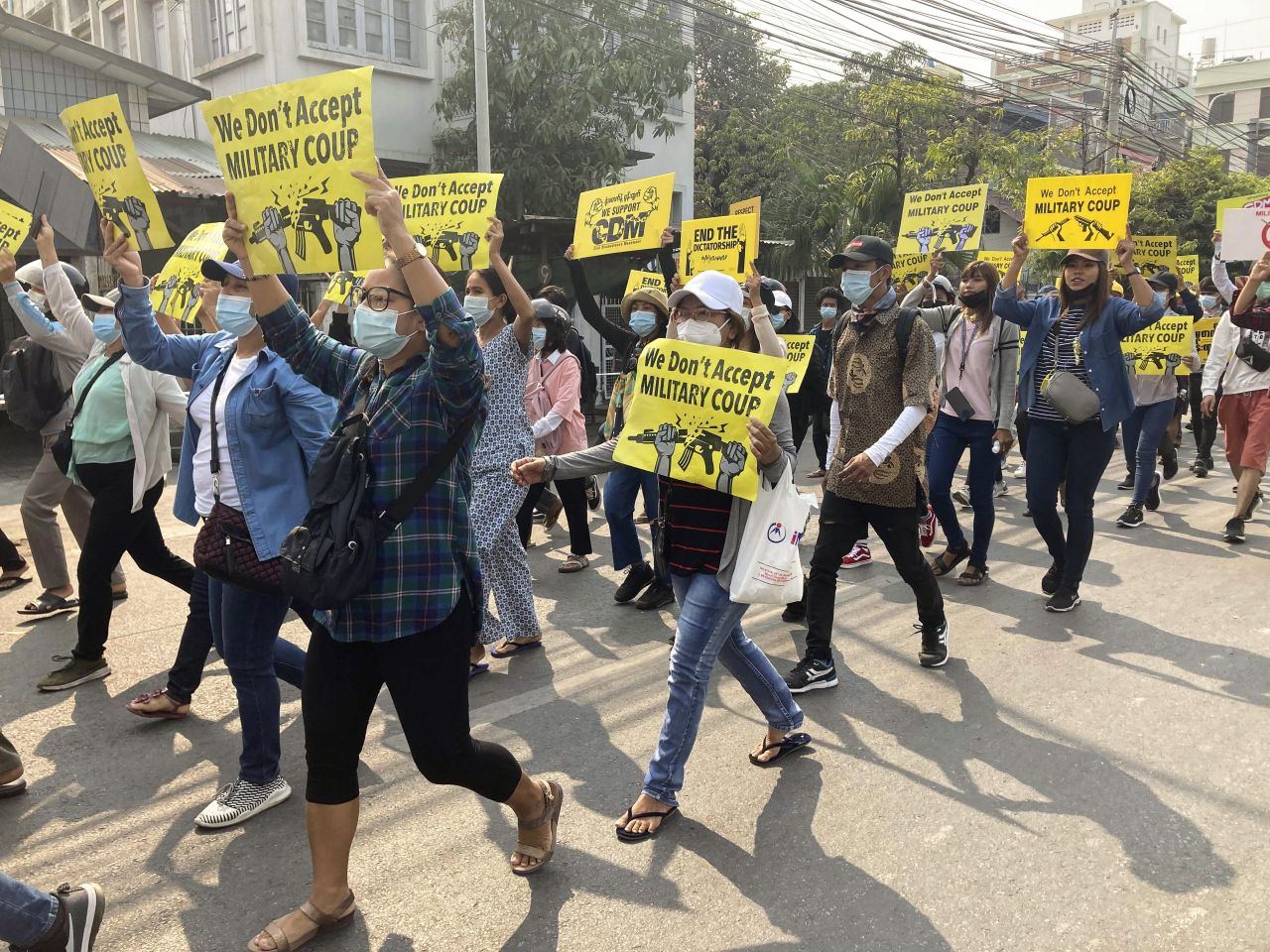 Anti-coup protesters display signs and shout slogan as they protest against the military coup in Mandalay, Myanmar. Myanmar's ruling junta has declared martial law in parts of the country's largest city as security forces killed more protesters in an increasingly lethal crackdown on resistance to last month's military coup. (AP-Yonhap)
YANGON (AFP) -- Myanmar's junta late Sunday imposed martial law in two densely populated Yangon townships after at least 18 protesters were killed in one of the deadliest days since the February 1 coup.

Sunday's violence brings the number of people killed in mass protests since the military wrenched civilian leader Aung San Suu Kyi from power to around 100, though activists and rights groups believe it could be higher.

The junta has repeatedly justified its power grab by alleging widespread electoral fraud in November's elections, which Suu Kyi's National League for Democracy (NLD) party won by a landslide.

The vast and impoverished townships are known as factory hubs and home to garment factories.

The junta "gives administrative and judicial martial law power to the Yangon regional commander... to perform security, maintain the rule of law and tranquility more effectively," said an announcer on state-run TV.

Soldiers and police have in recent weeks been staging near-daily crackdowns against demonstrators calling for a return to democracy, using tear gas and firing rubber bullets and live rounds to quell anti-coup protests.

In Hlaing Tharyar township police and soldiers clashed violently, with protesters wielding sticks and knives and rushing for protection behind makeshift barricades.

Protesters using cut-out trash cans as shields managed to rescue some demonstrators wounded when the security forces opened fire, but a doctor said not all could be reached.

"I can confirm 15 have died," the doctor told AFP, adding that she had treated about 50 people and expects the death toll to climb.

The Assistance Association for Political Prisoners monitoring group -- which verifies arrests and fatalities since the coup -- gave a higher death toll.

Residents hiding at home heard gunshots continuously throughout the day, while military trucks were seen driving through the smoky streets.

The United Nations' envoy for Myanmar strongly condemned the bloodshed, stating that the international community, "including regional actors, must come together in solidarity with the people of Myanmar and their democratic aspirations."

Envoy Christine Schraner Burgener said in the statement that she had heard "heartbreaking accounts of killings, mistreatment of demonstrators and torture of prisoners" from contacts in Myanmar.

The ongoing brutality "severely undermines any prospects for peace and stability" in the country, she said.

Former colonial power Britain said it was "appalled" by the use of force "against innocent people."

A statement signed by British ambassador Dan Chugg called for an "immediate cessation" of violence and for the regime to return power to the elected civilian officials.

Hours before violence erupted in Hlaing Tharyar a police officer posted a TikTok video saying in a voiceover that security forces would be bringing heavy weaponry into the township.

"I will not have mercy on Hlaing Tharyar and they will fight back seriously too because there are all kinds of characters there," said the officer under the account @aungthuraphyo40.

"We should not have mercy on them."

The video, which was seen and verified by AFP fact checkers, was removed hours later.

State-run media said that five factories in the garment-producing township had been razed.

Among the burned buildings were Chinese-owned factories, Beijing's embassy in Myanmar said. It condemned actions of the "destroyers" in a statement posted on their official Facebook account.

The embassy "quickly urged local police to guarantee the security of Chinese businesses and personnel," it said.

The evening news in Yangon confirmed a death in Tamwe township, saying that security forces opened fire when hundreds of protesters tried to torch a police station.

Elsewhere a man was shot dead in northern Hpakant city, and a woman was killed from a headshot in Mandalay.

"I've seen the fallen heroes give their lives," said 21-year-old Ma Khine Lay, admitting she was afraid even as she rebuilt barricades out of bricks and bamboo poles in a Yangon township.

"I will fight until the end."