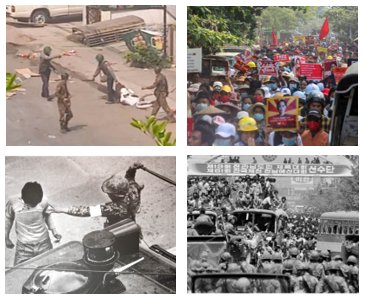 Photos taken from Myanmar's anti-coup protests in March (top) and the Gwangju civil uprising in 1980 in Korea (bottom). (Reuters-Yonhap, Yonhap)
The nationwide crackdown and shootings at protesters in Myanmar against the military rulers’ overthrow of an elected government last month are becoming increasingly reminiscent of what happened in Gwangju 41 years ago.

Scores of people have been killed and about 1,800 others have been detained since the military coup on Feb. 1 that ousted Myanmar’s civilian leaders including state councilor Aung San Suu Kyi.

The Southeast Asian country had been under military rule for nearly half a century until 2011.

Following a series of reforms implemented by the military from 2011, including the release of Aung San Suu Kyi from house arrest and relaxation of press censorship, the National League for Democracy won a sweeping victory in the general elections in 2015.

The NLD won the 2020 general election too in a landslide, but the military argued that it found over 8 million irregularities in voter lists.

On Feb. 1, Myanmar’s military led by Senior Gen. Min Aung Hlaing staged the country’s third coup since independence from Britain in 1948, and declared a one-year state of emergency.

Telephone and internet access as well as most television broadcasts were suspended in major cities, while the stock market and commercial banks were shut down. Domestic and international flights were canceled.

A civil disobedience movement that encouraged people to stop going to work, boycott businesses owned by the generals and join protests spread across the country in the weeks that followed.

Two unarmed protesters were killed by security forces on Feb 20, leading to a general strike on Feb. 22 when millions of people took to the streets.

The military responded by stationing snipers at rooftops, and police raided houses at night.

At least 38 people were killed just on March 3 as Myanmar security forces fired at the protesters.

The United Nations has called on the military to exercise maximum restraint and release the trapped protesters, while governments such as the US, Britain and Canada have imposed sanctions on Myanmar’s generals.

In South Korea, Chun Doo-hwan, a brigadier general who had taken control of the military, staged a coup in December 1979, and declared martial law in May 1980.

Protests against military rule spread quickly nationwide, with the southwestern city of Gwangju becoming the center of the uprising.

The military took control of universities in Gwangju on May 18, 1980, and barred students from going to school. Students were beaten up by the soldiers, and they took to Geumnam-ro in downtown Gwangju.

The soldiers also assaulted and arrested Gwangju citizens who supported the student protesters.

More people joined the protests which got more aggravated the next day, with the protesters’ bus killing four police officers. Two citizens were shot to death in the Gwangju Station plaza.

On May 21, representatives of the protesters sat down to negotiate with the governor, but the talks broke down as the soldiers did not keep their promise to retreat by noon.

The soldiers began shooting afterward, killing and injuring many civilians.

The protesters then extorted weapons from reserve forces storages in nearby Naju and Hwasoon, and began to arm themselves.

What began as pro-democracy protests turned into an armed struggle.

On May 27, troops from five divisions entered downtown Gwangju and defeated the civil militia within 90 minutes.

What was happening in Gwangju was not immediately known to those outside as people were barred from entering the city.

It was reported by the press from the third day.

In 1988, the government said 191 people were killed and 852 people were wounded during the Gwangju Democratic Uprising.

On Monday, a group of 72 lawmakers of the ruling Democratic Party including Rep. Song Young-gil urged UN Secretary-General Antonio Guterres to take strong action such as having the UN Security Council issue a joint statement or adopt a resolution against the Myanmar military’s violence.

“We care deeply about this issue due to our past experiences with democratic movements and the subsequent military violence from the 1960s to 1980s in South Korea. Especially the May 18 Gwangju Democratization Movement shares many similarities with the current situation in Myanmar,” they wrote in a letter addressed to Guterres.

“We strongly condemn the coup d’etat of Myanmar’s military as a serious challenge to democracy. While we acknowledge that several nations are condemning Myanmar’s military commander-in-chief Min Aung Hlaing, we underline that there have not been any public statements or resolutions by the UN Security Council to address this issue.”

If the UNSC does not take joint action against the violence in Myanmar, it will “leave a dangerous precedent for other military groups in the world that they can simply disregard democracy and international order to overthrow a democratically-elected government and seize power,” they wrote.