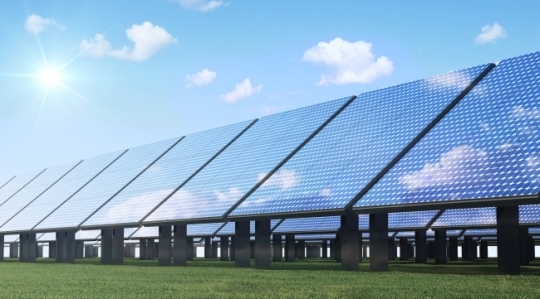 A visual concept image of solar panels. (123rf)
South Korea has less potential to decarbonize autonomously than its Asian peers due to the insufficiency of its solar resources and seasonal variations in electricity demand, showed an analysis by Asia Investor Group on Climate Change on Thursday.

“In Asia, we believe that China, India and Vietnam have the most realistic chance of reaching their 2030 wind and solar capacity targets as their current installed capacities are already 45 percent, 19 percent and 66 percent of their 2030 targets, respectively,” read a report by the investor engagement initiative on climate change.

“Japan and South Korea, who have less solar resources and greater seasonality of energy demand, are likely to require green energy imports to decarbonize.”

The AIGCC also noted that Asia‘s “uneven availability” of wind and solar resources pose challenges to Asia’s decarbonization. The analysis labeled Korea‘s potential to make use of solar power resources as “low” and of wind energy as “medium.” This showed contrast with China and India, which had “high” potential to use solar and wind energy.

The report is designed to shed light on decarbonization investment opportunities in Asia.

According to AIGCC, a Paris Agreement-aligned transition consistent with keeping average global warming to 2 degrees Celsius above pre-industrial levels could create $26 trillion in new investment opportunities in Asia, while the world’s 1.5-degree Celsius goal could engender $37 trillion in opportunities.

The estimate was based on studies by International Energy Agency, Tsinghua University and Integrated Assessment Models.

AIGCC used Tsinghua‘s method to extrapolate China’s decarbonization investment to the rest of Asia. The 1.5-degree Celsius goal may create $1.8 trillion worth of opportunities in Korea, but the approach fails to take into account specific conditions in Korea that are different than China, according to AIGCC.

“Each country has different input costs. For example, decarbonizing Japan and South Korea may cost more than China on a per unit basis due to their higher land and labor costs,” noted the report.