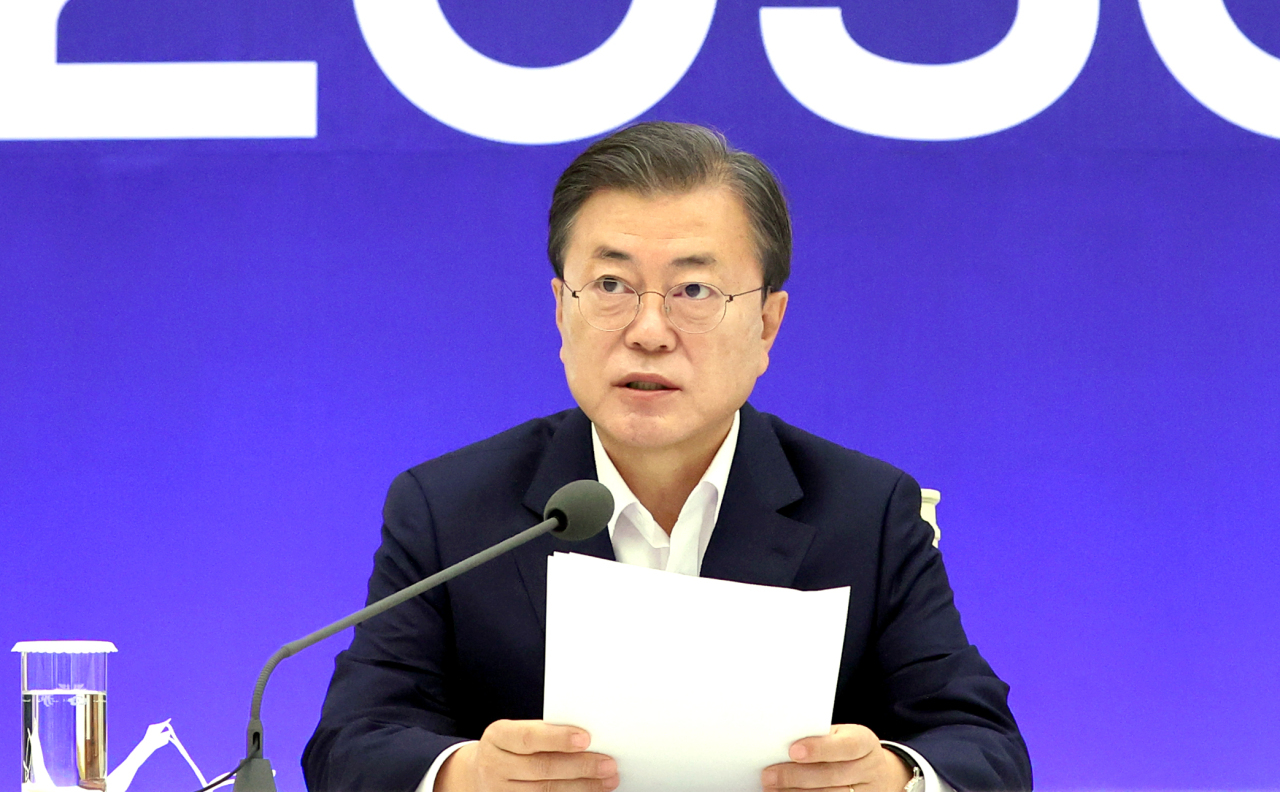 President Moon Jae-in speaks at a meeting on South Korea’s aim of going carbon neutral by 2050, at Cheong Wa Dae in Seoul on Nov. 27. (Yonhap)
Renewable energy will take up nearly 42 percent of South Korea’s power generation capacity by 2034, according to a blueprint for the national energy mix unveiled Tuesday.

The final draft of the Ninth Basic Plan for Electricity Supply and Demand for the years 2020-2034, drawn up and released by the Ministry of Trade, Industry and Energy, reaffirms President Moon Jae-in’s commitment to move away from nuclear power and toward renewables.

While the country’s electricity generation capacity is projected to surge to 185.3 gigawatts by 2034, from 120.5 gigawatts this year, renewables will account for 41.9 percent followed by liquefied natural gas at 31.8 percent and coal at 15.6 percent. Nuclear power is projected to provide 10.4 percent.

That represents a major change in the energy mix, which currently depends on coal.

Last year, coal, LNG and nuclear power were the mainstay of electricity generation in Korea, contributing 40.4 percent, 25.9 percent and 25.6 percent respectively. Renewables made up just 6.5 percent of total electricity production.

The plan will be finalized after a public hearing Dec. 24 and a policy review Dec. 28.

In detail, the plan envisions the shutdown of 30 coal-fired power plants by 2034, which will have reached their operational lifetime limit of 30 years by then. To ensure a stable electricity supply, 24 of the facilities will be turned into liquefied natural gas power plants.

However, the seven coal-fired power plants currently under construction will be built as planned. As a result, the generation capacity of coal-fired plants, which stood at 35.8 gigawatts this year, will shrink to 29 gigawatts by 2034, while that of LNG power plants will increase 59.1 gigawatts from 41.3 gigawatts in the same period.

Meanwhile, the number of nuclear power plants will reach its peak of 26 in 2024 and diminish to 17, as the Moon administration banned the construction of new nuclear plants and the lifetime extension of existing ones.

As a result, the generation capacity of nuclear power plants will be reduced to 19.4 gigawatts by 2034 from this year’s 23.3 gigawatts. The Shin Hanul plants No. 3 and No. 4, whose construction is on hold due to the administration’s nuclear phaseout policy, have been excluded from the plan.

To compensate for the smaller numbers of coal-fired plants and nuclear plants, the government will roll out renewable energy generation facilities with a combined capacity of 77.8 gigawatts by 2034, almost quadruple the current 20.1 gigawatts.

Though the government’s midterm goal was to increase Korea’s capacity for solar and wind power to 29.9 gigawatts by 2025, the target has been adjusted to 42.7 gigawatts, as President Moon Jae-in’s Green New Deal initiative is expected to add an additional 12.8 gigawatts.

Despite the significant role of renewables, they are expected to account for only 20.8 percent of electricity supply in 2030. Korea will still be dependent on coal, nuclear power and LNG, which will respectively generate 29.9 percent, 23.3 percent and 25 percent of all electricity in the same year.

With total electricity demand expected to rise to 102.5 gigawatts by 2034 from this year’s 89.1 gigawatts, Korea’s transition to green energy will cut 193 million tons of greenhouse gases from projected levels.

To further boost clean energy, the government aims to install more power grids in regions where renewable energy facilities are concentrated, such as Sinan and Yeonggwang counties in South Jeolla Province, and lay out immediate plans to support solar farms that are currently unable to access power grids due to grid shortages.