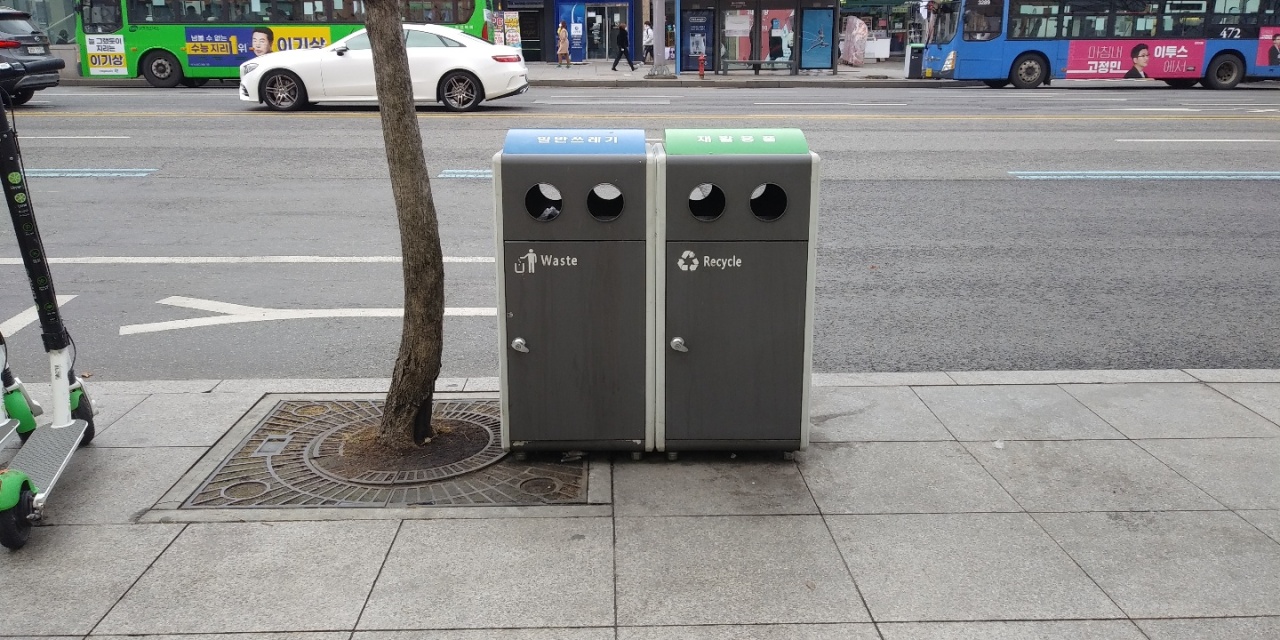 A public trash can, a rather rare find in Seoul, is placed on the street in Gangnam District, southern Seoul. The city is believed to have fallen behind other major metropolitan cities overseas in terms of the availability of trash cans on the street. The lack of the public amenity over the years has become one of the challenges of living and traveling in Seoul. (Ko Jun-tae/The Korea Herald)
Finding a trash can in Seoul is much harder than it would seem for many citizens and visitors, which has limited 27-year-old Yook Jimin from caring to buy and eat snacks during the day.

He became accustomed to carrying trash inside his backpack, all of which had to be taken care of after arriving home. What was consumed on the streets ended up in his own trash bag back in his room, and he is one of many Seoul citizens unhappy with the lack of public trash cans.

“I really do try to look for trash cans. I really do,” said Yook, a resident of Jongno District, central Seoul. “On most days, I carry trash in my backpack or my pockets until finding a trash can to throw them away, but when that isn’t an option, I just litter.”

Since coming back from Chicago last year, Yook said he made earnest efforts to stay civil-minded and responsible, but he was left inconvenienced and angry. Melted chocolate leftover in plastic wrap soaked his pocket, and his backpack reeked of sausages after carrying around the packaging.

“Is it that hard to set up more trash cans?” he asks. “All of these problems can be taken care of if I could just find more trash cans on the street.”

Yook is certainly not the only one in Seoul confronting this issue, as seen from many travel guides and tips for those visiting Seoul. Many social media users and travel guide writers ask their readers to be aware of the fact that it is nearly impossible to find places to dispose trash.

“In my three-month stay here, I’ve realized that there are almost no trash cans in public,” a Reddit user wrote in a post back in September.

“I do find trash cans here and there especially in subway stations, but when I go outside, trash cans are nowhere to be found, so I usually look for the nearest convenience store for trash.”

Seoul, like South Korea as a whole, has its reasons to put fewer trash cans on the street. The city introduced the Jongnyangje system in 1995 to cut the amount of waste by levying financial responsibility on individuals producing trash.

The system requires residents to buy special bags for disposing of trash, which are more expensive than regular bags. To prevent people from using public trash cans to bypass the system, Seoul removed a total of 3,900 trash cans until 2007.

However, faced with continuous complaints from residents and tourists, the city began to install more after that, adding more than 2,500 new public bins as of this month.

But the city falls behind in terms of availability when compared to comparable cities overseas, which has led to calls from experts to increase the municipal budget for managing public trash.

While enforcing heavy fines for those who litter, Singapore has been installing trash cans every 30 meters apart. Tourist-heavy areas like Paris and Berlin, both of which have fewer residents than Seoul, have more than 20,000 public trash bins and they still experience problems with overflowing trash in their streets.

“I don’t remember having to worry about finding a place to throw away trash in most major cities overseas, and it was natural for people in those places to easily walk over to public trash bins to take out their garbage, but not here,” said Jeon Hwi, a 26-year-old resident of Jung District, central Seoul.

“It is disgusting to see how cigarette butts and plastic wrapper are scattered in every corner of the street, and all of this could be taken care of if there actually are places to throw away trash.”

Experts agree more trash bins should be installed, but they argue the city has to be more delicate in enforcing it. They say demand should be accurately measured on where more trash cans are needed and where they are not.

“District governments must be willing to spend time and measure out what areas within their districts are overflowing with trash on the street. That, to me, seems like what should be prioritized rather than indiscriminately installing more trash bins in unspecified locations.”

Phae suspects that the public consciousness has stayed mostly unchanged and that Seoul city government should not naively assume that household trash will not end up in newly installed trash cans.

He suggested trash bins be designed with smaller openings to prevent people from disposing their household trash in them, while the city government allocates more funds to apply the design.

“But overall, people should be promoting a eco-friendly lifestyle and voluntarily work to reduce the amount of trash,” Phae added. “After all, we need trash bins because we have trash.”