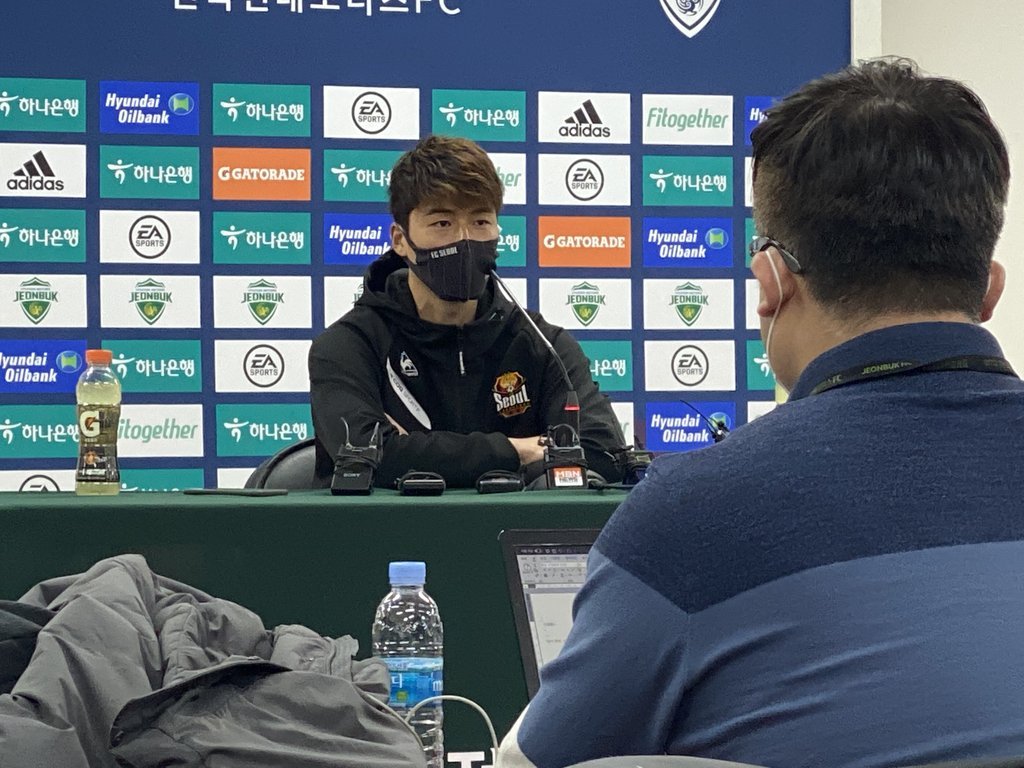 FC Seoul midfielder Ki Sung-yueng speaks at a press conference at Jeonju World Cup Stadium in Jeonju, 240 kilometers south of Seoul, after a K League 1 match against Jeonbuk Hyundai Motors last Saturday. (Yonhap)
A bitter court battle is potentially on the horizon for the South Korean football star Ki Sung-yueng against his two former teammates accusing him of sexual and physical assault, following an about-face by the lawyer representing the two on Tuesday.

Ki, midfielder for FC Seoul in the K League 1, has repeatedly denied those assault charges, first levied against him by two elementary school teammates last Wednesday. They claimed that Ki ordered them to perform sexual acts on him and beat them up when they didn't oblige and said the incidents took place between January and June 2000.Ki has called on the two alleged victims to disclose evidence against the player that they claim they have. And Park Ji-hun, attorney for the two alleged victims, said Tuesday that evidence will only be disclosed in court. He had previously said he was prepared to reveal it in public for all to see, in response to Ki's repeated denials.

"I'd like to ask Ki Sung-yueng to file civil and criminal suits against my clients as soon as possible," Park said. "Evidence will then be presented to investigative authorities and the court so that only Ki and his legal representatives will be able to see it."

The lawyer explained that evidence against Ki includes individuals other than Ki and the two alleged victims and that he wanted to protect rights of the others.

Park added that he didn't want the two sides to waste any more time and energy in the court of public opinion and he wanted the truth to come out in an actual court.

When Park first made allegations against Ki, he acknowledged that it'd be difficult to press charges against the player because the statute of limitations has expired. Park said his two clients only wanted a "sincere apology" from Ki.

But Ki hasn't budged an inch from his denials and vowed all legal measures necessary to clear his name. If he decides to take the matter to court, he will likely press defamation charges against the two.

Ki started FC Seoul's season opener last Saturday but was replaced after just 36 minutes against Jeonbuk Hyundai Motors. Ki called a press conference after the match to address the issue in person for the first time, after first releasing a statement through his agency and then posting an Instagram message to deny allegations. (Yonhap)