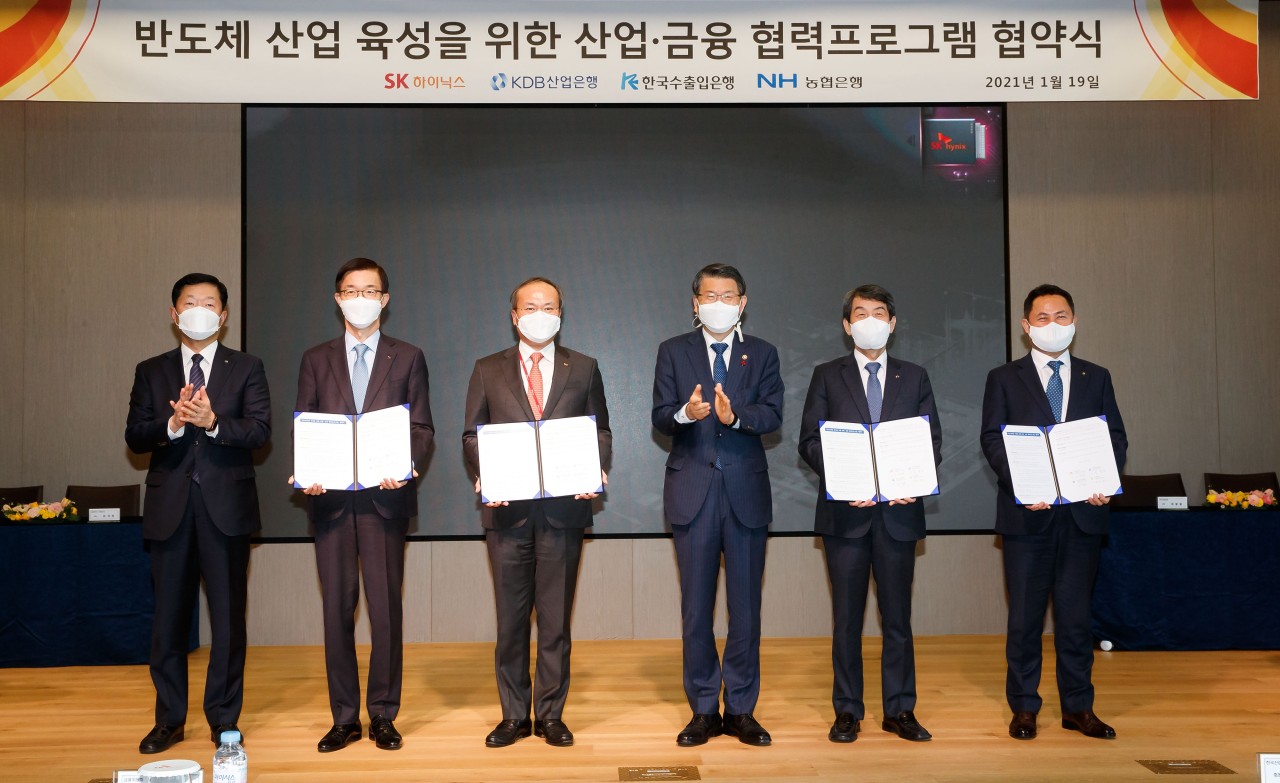 Financial Services Commission Chairman Eun Sung-soo (third from right) and SK hynix CEO Lee Seok-hee (third from left) pose after signing an agreement to provide $3 billion in loans to support the chipmaker‘s M&A deals in Icheon, Gyeonggi Province, Tuesday. (FSC)
A group of South Korean lenders pledged on Tuesday to earmark a combined $3 billion over the next five years to spur global investment into local semiconductor maker SK hynix as part of the nation’s bid to shore up growth of futuristic technology.

South Korea’s top financial regulator, the Financial Services Commission, said the lenders’ agreement with the country’s second-largest semiconductor chip manufacturer will pave the way for future economic development as the country is in search of new growth engines in the post-pandemic era.

The pledge to muster up foreign currency-denominated dry powder is an “aggressive step to pioneer the futuristic industry and secure the upper edge” through mutual efforts by an industry player and financial circles, FSC Chairman Eun Sung-soo said in a ceremony held at SK hynix’s Icheon campus.

“In the face of crises and challenges such as low births, an aging society and the fourth industrial revolution, we should not only keep pace with the economic rebound but also create a blueprint for the new future,” he said.

The announcement comes as SK hynix is facing a growing need to diversify its product pipeline as its NAND flash memory chip business is experiencing a chronic oversupply. SK hynix is one of the Korea’s semiconductor powerhouses along with Samsung Electronics.

During the event, SK Hynix also vowed to take part in a government initiative to achieve a national supply chain autonomy.

Under the plan to create a 500 billion won ($454 million) fresh fund this year, SK hynix will set aside 30 billion won along with KDB and Eximbank. The fund is part of the initiative launched in 2020 to stimulate growth of small-and mid-sized enterprises devoted to producing materials, parts and equipment. A 400 billion won fund was established in its first batch.