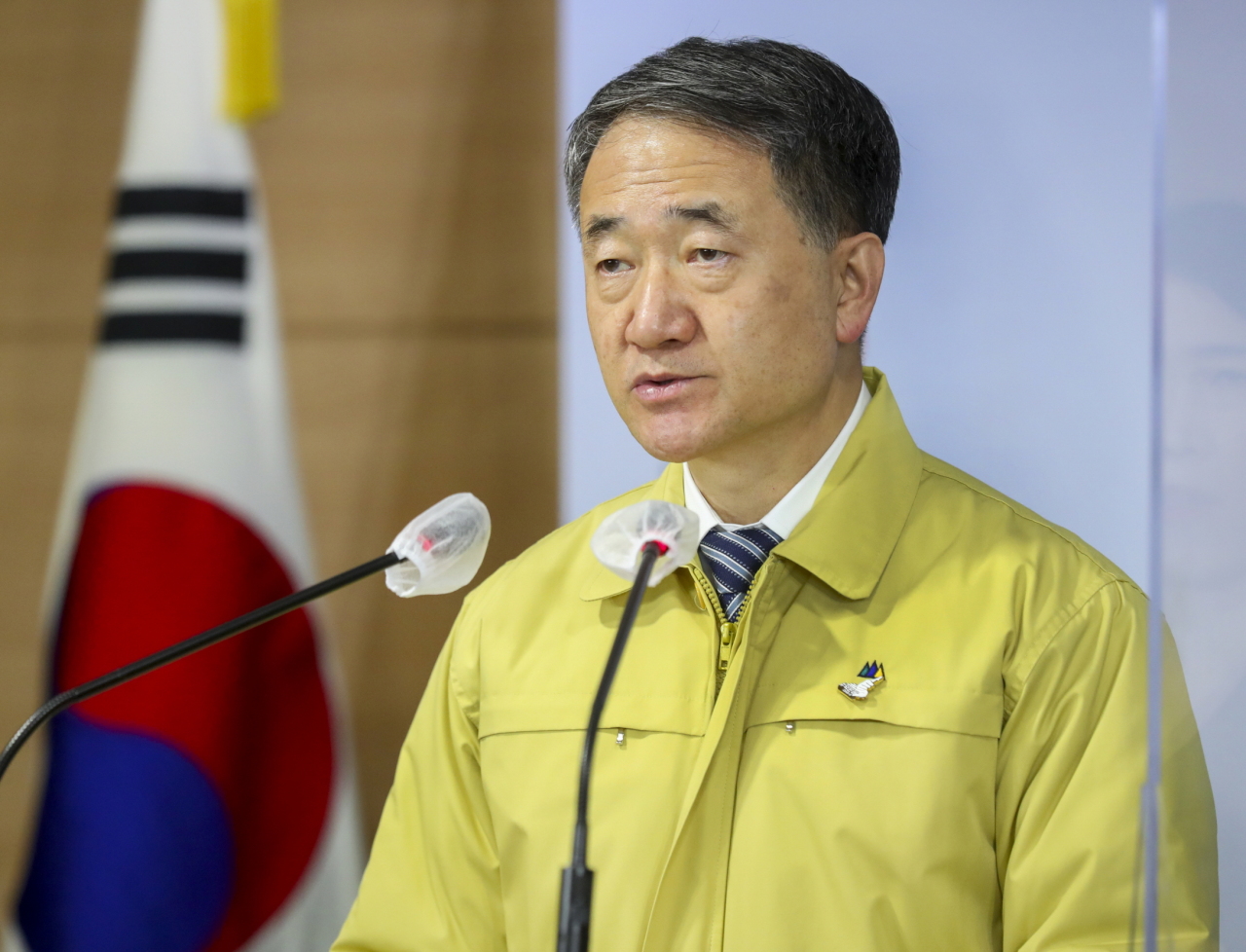 Health and Welfare Minister Park Neung-hoo speaks during a press briefing Sunday afternoon. (Ministry of Health and Welfare)
The second-strictest social distancing rules in South Korea’s COVID-19 playbook will be imposed across the Seoul metropolitan area for the next three weeks from Tuesday, the government said Sunday.

The Minister of Health and Welfare Park Neung-hoo told a news briefing escalating the country’s response to the pandemic was necessary to “keep the health care systems from collapsing.”

The next tier of restrictions, which is set to last until Dec. 28 at midnight, reduces the number of people allowed to gather indoors to 50 or less, bans indoor sport activities and advises employers to support telecommuting. These are in addition to the middle tier restrictions currently in place, which limit indoor dining past 9 p.m. and shutter nightlife venues such as bars and clubs.

Park also apologized for the impact of the social distancing measures on small businesses, saying, “I am sorry to all the businesses that have had to face such hardship this year.”

“But I fear that failing to take immediate action at this point could exact a greater toll,” he said.

Korea on Sunday confirmed 631 new cases of the coronavirus infections -- 599 locally transmitted and 32 imported -- after conducting 14,371 tests, according to the Korea Disease Control and Prevention’s situation report, which is the third-highest total in a single day since the onset of the outbreak here. The cumulative number of official cases is now 37,546.

The test positivity rate, the percentage of people who test positive out of all those that have been tested, was 4.39 percent. The threshold for the percent positive being “too high” is 5 percent, according to the Johns Hopkins Bloomberg School of Public Health.

In the recent week, 514.4 cases tied to community transmission were reported a day on average. Over 70 percent of those cases were traced to Seoul and nearby cities.

Seoul logged the most number of cases with 253, bringing the case count in the capital to 10,204. As there are 9.67 million people in Seoul, according to the Interior Ministry’s November data, this means roughly one out of every 1,000 Seoulites has or has had COVID-19.

“Seoul stops at 9 p.m. starting this weekend,” acting Seoul mayor Seo Jeong-hyup told a news conference on Friday, imposing a semi-curfew that shuts down libraries, malls, grocery stores and other establishments in the evenings. Public transportation operations were scaled back by 30 percent after 9 p.m. as well.

Health experts complain Korea was slow to act despite having already met the benchmarks for toughened interventions last month.

Respiratory disease specialist Dr. Chun Eun-mi of western Seoul’s Ewha Womans University Medical Center said had Korea “taken the right steps at the right time,” the country might have been better prepared for the winter resurgence.

“The government lifted most measures in October, against its own guidelines, instead of using the time earned from intense social distancing to prepare for winter,” she said.

Jung also pointed out the government failed to impose measures based on the phased guidelines. “We are quick to open up and slow to restore restrictions. We set out those guidelines for a reason -- what’s the point of having them if we’re going to make arbitrary adjustments?”

The third wave of infections is pushing hospitals to the brink of capacity. The health authorities said at the current pace of case growth, the remaining beds may run out in less than two weeks.

The number of patients severely sick with COVID-19 rose by four to 125, leaving only 36 critical care beds available. Nearly 65 percent of beds at nonhospital treatment centers for patients with mild illness have also been filled, with room for just 1,467 more people.

People placed under home quarantine after coming into close contact with a patient climbed to a record high of 7,873, up 415 from a day prior.

Five more people died, putting the death toll at 545 and the death rate at 1.45 percent.