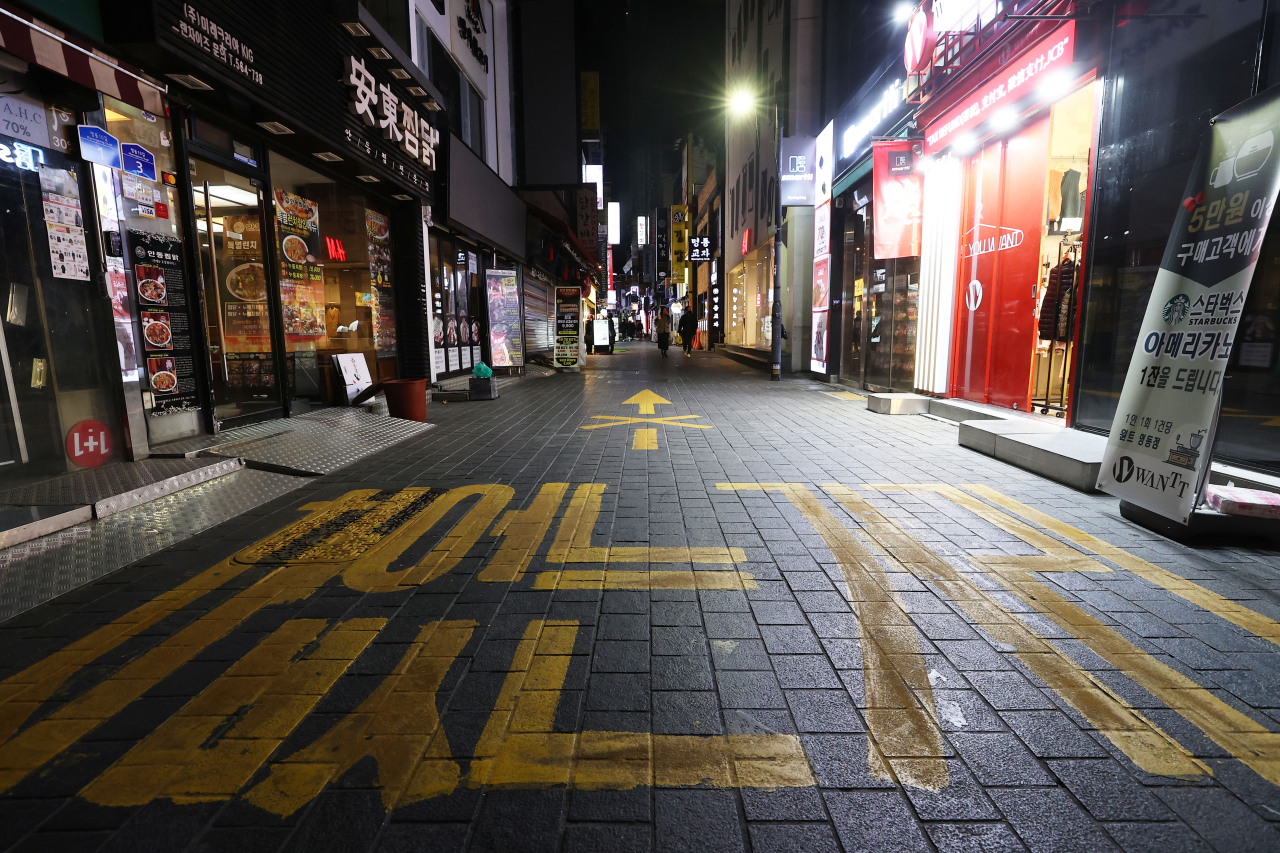 Shop lights are out at Myoung-dong, a usually busy tourist district in central Seoul, on Saturday evening. (Yonhap)
South Koreans are due to find out later today whether or not more social distancing restrictions will be implemented as the country reels under third wave of the coronavirus.

Korea on Saturday conducted 14,371 cases and confirmed 631 new infections -- 599 locally transmitted and 32 imported --, according to the Korea Disease Control and Prevention Agency’s Sunday situation report, which is the third-highest total in a single day since the onset of the outbreak here. The cumulative number of official cases is now 37,546.

Saturday’s test positivity rate, the percentage of people who test positive out of all those that have been tested, was 4.39 percent. The World Health Organization recommends the percent positive remain below 5 percent.

Seoul continues to account for the most number of cases, with the case count in the capital reaching 10,204. There are 9.67 million people in Seoul, the Interior Ministry’s November data shows, which means roughly one out of every 1,000 Seoulites has or has had the coronavirus disease, or COVID-19.

“Seoul stops at 9 p.m. starting this weekend,” acting Seoul mayor Seo Jeong-hyup told reporters on Friday, imposing a semi-curfew that shuts down libraries, malls, grocery stores and other establishments and scales back public transportation operations in the evenings.

Seoul retreated back to the second-least strict tier of the country’s five-tier system for social distancing on Nov. 19, after keeping the least strict tier for over a month following a national holiday in October. Then, a week later on Nov. 24, a further climb in cases forced the city to move another tier backward.

Under the middle tier restrictions currently in place, some businesses considered high-risk such as karaoke joints, gaming centers and theaters can stay open until 9 p.m. with limited seating. Indoor gatherings of up to 100 people are permitted.

The next tier of restrictions -- which is imposed when new cases per day average over 400 for a week -- will be mulled at a government meeting later this afternoon. For the last two weeks, Korea has been eligible for the second-strictest tier which reduces the number of people allowed to gather indoors to 50 or less.

The number of patients seriously afflicted with COVID-19 increased by four to 125, leaving only 36 critical care beds available. Nearly 65 percent of beds at nonhospital treatment centers for patients with mild illness have also been filled, with room for just 1,467 more people.

People placed under home quarantine after coming into close contact with a patient rose to a record high of 7,873, up 415 from a day prior.

Five more people died, putting the death toll at 545 and the death rate at 1.45 percent.

Meanwhile Kwon Deok-cheol, a career health official who was a key player in Korea’s response to the 2015 outbreak of the Middle East respiratory syndrome, was tapped on Friday as the new Minister of Health and Welfare to replace Park Neung-hoo.