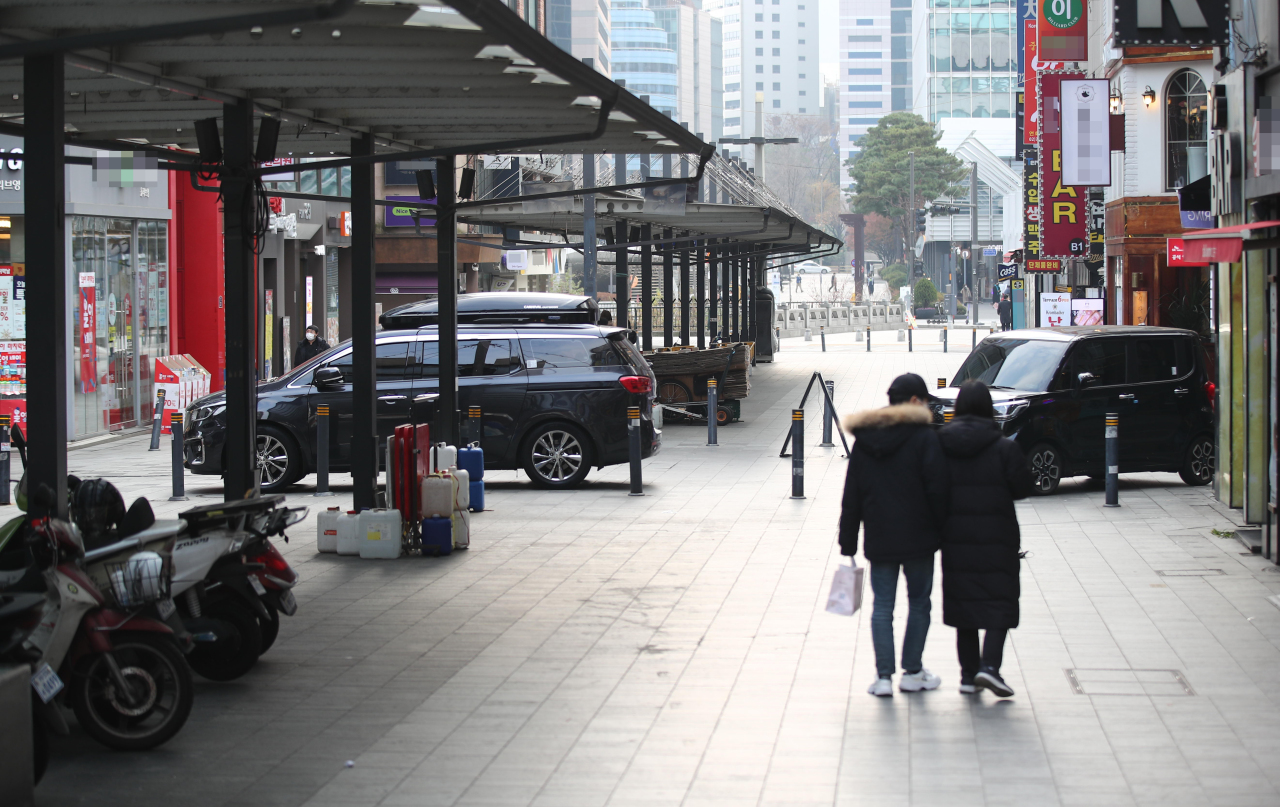 A street in downtown Seoul is relatively empty on Sunday. (Yonhap)
South Korea on Sunday decided to raise distancing regulations for the greater Seoul area to the second-highest level as part of its utmost efforts to stem a resurgence of the novel coronavirus.

The government announced that the Level 2.5 distancing, the second highest in the country's five-tier COVID-19 alert system, will be applied to the nation's capital area, which covers Seoul, Incheon and Gyeonggi Province, for the next three weeks. Health authorities are expected to announce when the upgraded rules will come into force during a press briefing scheduled for 5:30 p.m.

The government is also reviewing upgrading the distancing level in other areas.

"We've come upon a critical period in the fight against COVID-19," Prime Minister Chung Sye-kyun said during a government COVID-19 response meeting. "Despite our efforts to tighten social distancing, the daily number of infections rose to more than 500 last week from 400."

The prime minister asked South Koreans to refrain from having private meetings and activities for the ensuing weeks and join the nationwide campaign to curb the virus spread.

"I'm deeply worried that a hike in the distancing level will restrict the daily lives of our people and weigh heavily on small businesses," he said. "But we can go back to our everyday life only after overcoming this crisis."

The enhancement came as South Korea has been struggling with more than 500 daily new COVID-19 cases in recent days amid the third wave of the pandemic.

Earlier in the day, 631 more infections were reported, including 599 local infections, raising the total caseload to 37,546. Among the local infections, 253 cases were from Seoul and 176 from the surrounding Gyeongi Province, while Incheon, just west of Seoul, added 41 more cases.

Under Level 2.5, gatherings with 50 or more people are prohibited, while door-to-door sales businesses, karaoke rooms, indoor fitness facilities and indoor concert venues that offer standing shows will be forced to close, in addition to nightclubs and bars that allow dancing.

Restaurants cannot receive customers after 9 p.m. but can offer takeout and delivery. Cafes are only allowed to serve takeout at all hours.

The nighttime curfew for those facilities has already been in place in Seoul since Saturday, a day after the metropolitan government announced measures to preemptively curb the soaring infections in the capital area. The city's public transportation service was also reduced by 30 percent.

Sports events are allowed without spectators while religious services are only available online or via broadcasts. In-person religious activities, if needed, are permitted with 20 or less participants. (Yonhap)