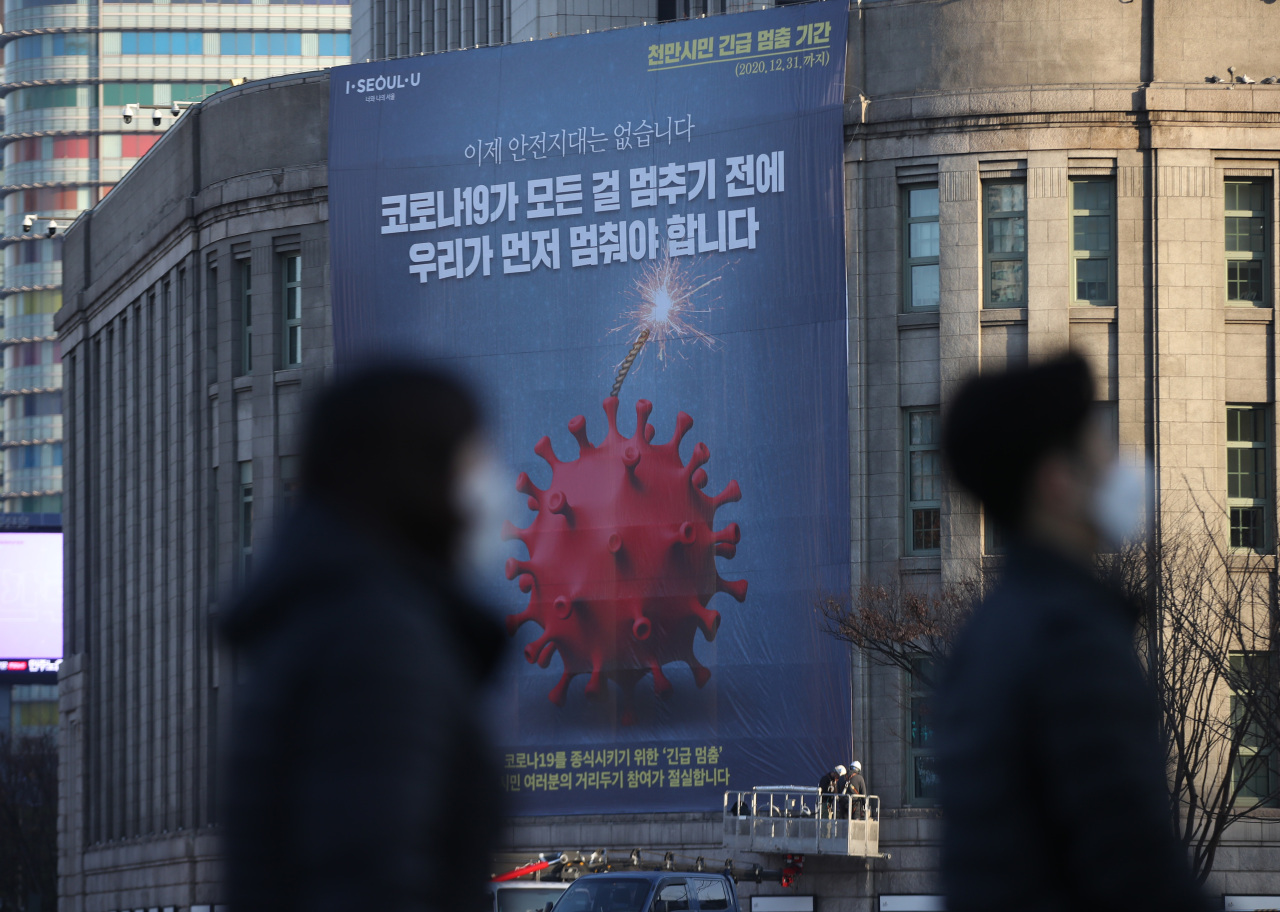 A massive banner emphasizing the enhanced social distancing campaign hanging on Seoul Metropolitan Library in central Seoul on Wednesday. (Yonhap)
South Korea reported the highest number of new daily COVID-19 cases since late August on Wednesday, amid the continued emergence of infection clusters from every corner of daily life.

The country reported 382 new coronavirus cases -- 363 locally transmitted and 19 imported from overseas -- in the 24 hours ending Tuesday at midnight, according to the Korea Disease Control and Prevention Agency.

Wednesday’s case tally marked the highest figure since Aug. 27, when it stood at 434 amid a resurgence of the virus triggered by a massive rally in central Seoul and the activities of a Seoul-based church. The figure marked an increase from 349 a day earlier and 271 for the 24 hours of Sunday.

The government continues to struggle to keep pace with the spread of the virus as clusters of infections are being reported in connection with public saunas, churches, cafes, hospitals, an adult establishment, workplaces, a prison, a group trip, a high school and a music studio.

Sohn Young-rae, an official from the Health and Welfare Ministry, said at a briefing Wednesday that the ministry has yet to expand the Level 2 social distancing measures nationwide, adding that the priority is to get the virus situation under control in the capital region, home to about half of the country’s population.

The daily average figure for domestic infections stood at 316.3 in the most recent one-week period, with an average of 222 coming from the Greater Seoul area, where Level 2 social distancing measures went into effect Tuesday.

Transmission routes for 14.5 percent of the cases reported Nov. 12-25 remained unknown as of Wednesday.

Of Wednesday’s locally transmitted cases, the majority were in Greater Seoul -- 139 in Seoul, 77 in Gyeonggi Province, which surrounds the capital, and 39 in Incheon. Outside the Seoul metropolitan area, virus cases were registered in all parts of the country except Sejong.

Of the 19 imported cases reported Wednesday, seven were detected at the border, while the other 12 were identified in individuals under mandatory self-quarantine in Korea. Six cases were from elsewhere in Asia, while nine were from the Americas, three came from Europe and one was from Africa.

The number of COVID-19 patients in serious or critical condition here stood at 81.

Three more people died from the virus, bringing the death toll to 513, with the overall fatality rate at 1.62 percent.

So far, of the 31,735 people confirmed to have contracted the new coronavirus here, 26,825 have been released from quarantine upon making full recoveries, up 103 from a day earlier. Some 4,397 people are receiving medical treatment while under quarantine.