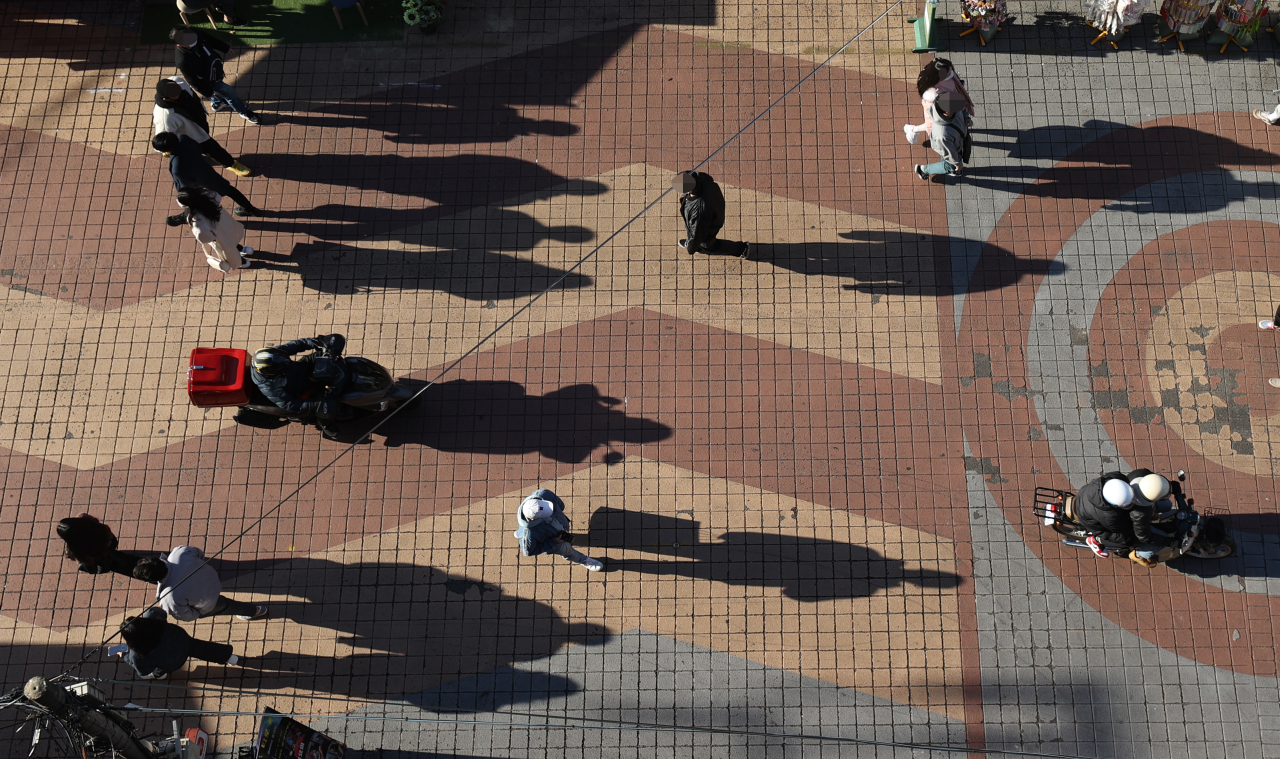 Pedestrians are shown in this photo taken in front of Hongik University in western Seoul on Monday. (Yonhap)
Health authorities on Tuesday urged members of the public to minimize social contact to help rein in a nationwide wave of COVID-19 infections as the country’s new daily cases bounced back to over 300.

The country reported 349 new coronavirus cases -- 320 locally transmitted and 29 imported from overseas -- in the 24 hours ending Monday at midnight, according to the Korea Disease Control and Prevention Agency.

“Please forgo your plans for year-end gatherings this year to prevent the nationwide wave of COVID-19,” Kwon Jun-wook, deputy director of the KDCA, said at a briefing Tuesday, adding that the fight against the virus is all down to wearing masks and minimizing contact with others.

Kwon also assured citizens that vaccines are coming, reiterating an earlier statement that the government is in the final stage of deals to secure a sufficient amount of vaccines.

At the same time, the country is helping local pharmaceuticals to develop their own vaccines. Two of the three local candidates have begun Phase 1 clinical trials, Kwon added.

Tuesday‘s case tally was an increase from 271 on Monday, when the reading was below 300 for the first time in six days due in part to fewer COVID-19 tests being conducted over the weekend. The daily case numbers have been in the triple digits since Nov. 8.

Sohn Young-rae, official from the Health and Welfare Ministry, said that the upward trend in virus cases is likely to continue this week, adding that the impact of toughened social distancing measures would begin to show next week.

The government is struggling to identify sources of infections and trace contacts because clusters of infections are popping up sporadically and simultaneously, most of them linked to social gatherings and everyday spaces.

Of Tuesday’s locally transmitted cases, the majority were in Greater Seoul -- 132 in Seoul, 69 in Gyeonggi Province, which surrounds the capital, and 16 in Incheon. Outside the Seoul metropolitan area, virus cases were registered in all parts of the country except for Daejeon.

Out of the 29 imported cases reported Tuesday, 10 were detected at the border, while the other 19 were identified as the individuals were under mandatory self-quarantine in Korea. Eleven cases were from elsewhere in Asia, 11 from the Americas, six from Europe and one from Africa.

The number of COVID-19 patients in serious or critical condition here stood at 79.

One more person died from the virus, bringing the death toll to 510, with the overall fatality rate at 1.63 percent.

So far, of the 31,353 people confirmed to have contracted the new coronavirus here, 26,722 have been released from quarantine upon making full recoveries, up 183 from a day earlier. Some 4,121 people are receiving medical treatment while under quarantine.