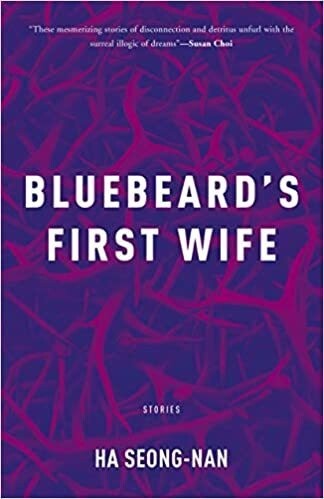 This is the second time that a South Korean literary work has made the list. The first was in 2016, when Publishers Weekly recognized the English translation of “The Vegetarian” by Han Kang.

“Ha’s nitro-fueled collection captures the dark side of South Korean society in mischievous, unapologetic feminist stories,” the weekly trade magazine said in its book review. “Shocking violence occurs between a new married couple, a dog is stolen, and neighbors are suspiciously noisy among other disturbances in this wonderfully weird book. Each story stands out, and together they form a nightmare impossible to turn away from.”

The stories were translated by Vancouver-based Janet Hong, who has been translating literary works by notable Korean writers, including Kang Young-sook, Han Yu-joo and Kwon Yeo-sun, for the last 20 years.

“Bluebeard’s First Wife,” which came out in Korean in 2002, is Ha’s third collection of short stories. The stories in “Bluebeard’s First Wife” reflect watershed moments in Korean society such as the Sealand Youth Training Center fire in 1999, which claimed the lives of young children. The Daesan Foundation, founded by Kyobo Life Insurance, provided support for the publication of the English version.

The English edition of “Bluebeard’s First Wife” is published by US publishing company Open Letter Books.